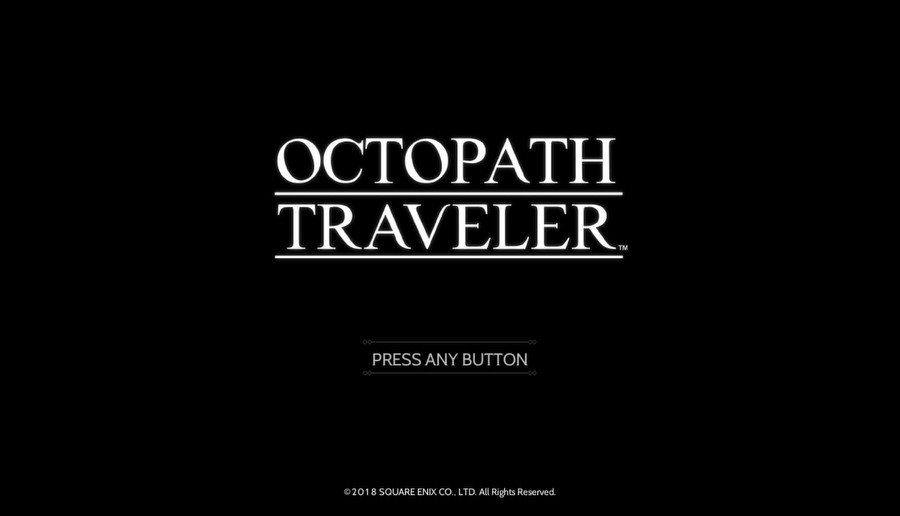 Here I am, about to undertake an 80-hour RPG for a Let's Play. Truly I am insane.

The above link has the video for this opening, which is simply all eight characters walking around. If nothing else, the game lives up to its name! 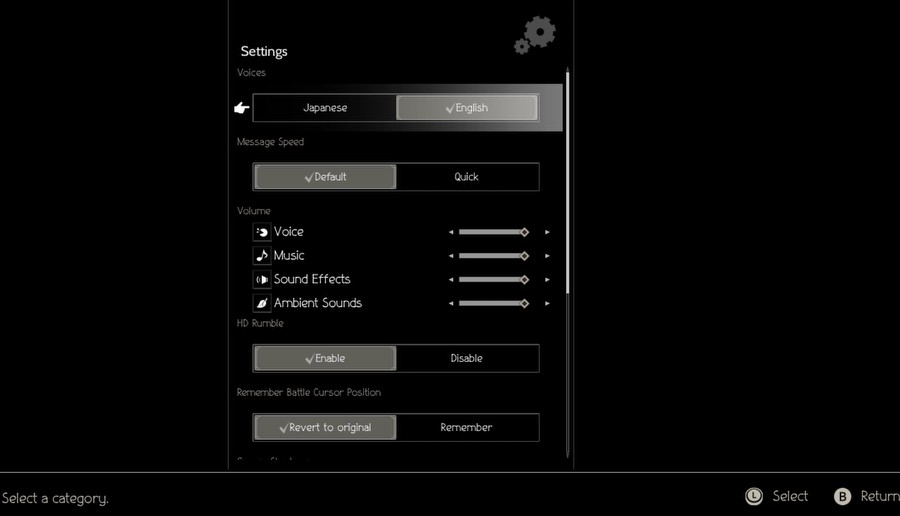 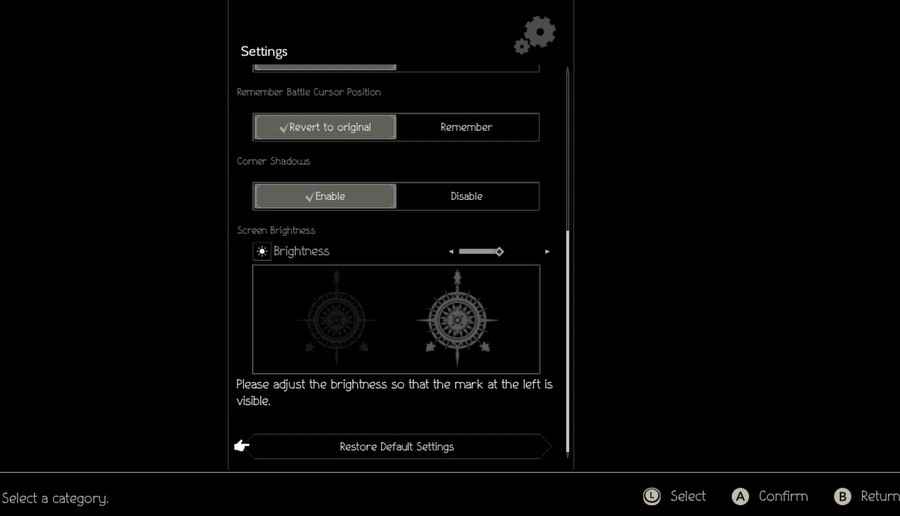 Settings are a bit sparse. You can make text appear instantly, and you can go between Japanese and English voices. Generally, a third or so of the scenes in each character chapter are voiced, with a lot of battle lines.

Corner Shadows make the corners darker to make the middle pop out more, but it also means obscuring more of the viewing area, so despite the option saying otherwise they'll be disabled for this LP. 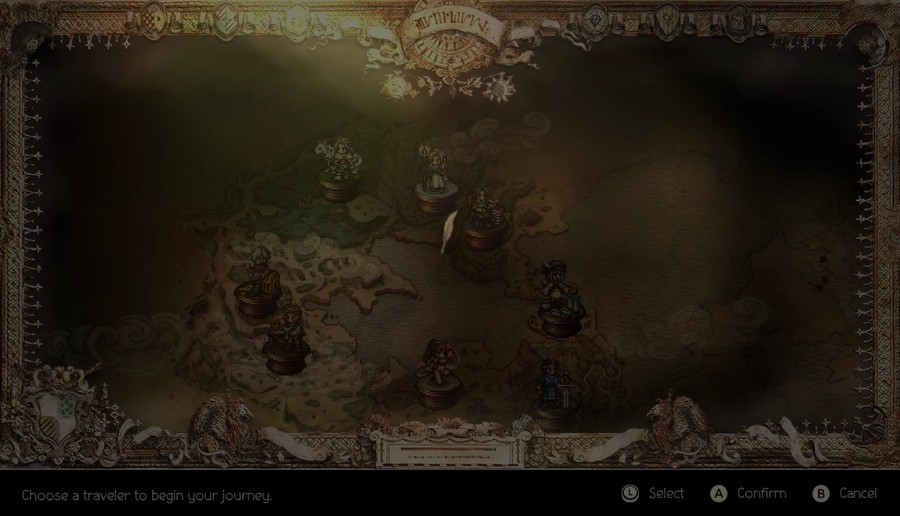 Starting a new game brings us to a map with the eight characters overlaid. Before we can begin, we have to choose one of these characters. This character will be our main, and will always be in our party until we complete their final chapter, after which we can finally rotate them out. That said, I'll probably save their Chapter 4 for last. Otherwise, it doesn't really matter since we can see all eight stories in one playthrough.

Each character has a distinct job, a path action to use when dealing with townspeople (either Noble, which has restrictions but otherwise always works, or Rogue, which can always be used, but if you fail too much you'll be blocked from further Path Actions until you pay a bribe), and a talent that applies either to battle or in the overworld. I'll explain each as we run into them. 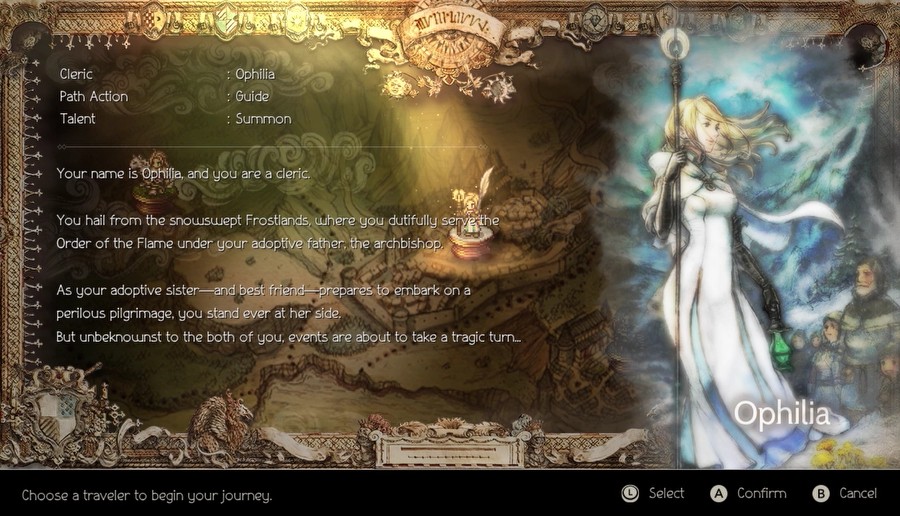 Name: Ophilia Clement
Age: 20
Job: Cleric - Focused on healing, buffs, and dealing Light-elemental damage. Uses the staff.
Path Action: Guide (Noble) - Recruit a NPC to follow you around. Most NPCs require a minimum level to be recruited.
Talent: Summon - Summon a recruited NPC into battle to use special attacks.

Ophilia is the first of the Octopath Travelers because, going clockwise from her, all the characters' first letters spell out "OCTOPATH". Ophilia's the healer of the group, but her light attacks can be potent, and she has one of the better buffs in the game. She does suffer offense-wise at first, but the NPCs she can Guide and the other PCs you meet later make up for that. She's also one of the tankier characters in the game, so between that and her healing, it'll be hard to defeat a party with Ophilia.

Story-wise, Ophilia is pretty much what you expect from the Cleric type, studious, kind, and determined. That said, there's a bit more of a spark to her than what you'd usually see in this archetype, and she's pretty open-minded and eager to learn about the world she's exploring, even if she's somewhat ignorant about the world outside her home. 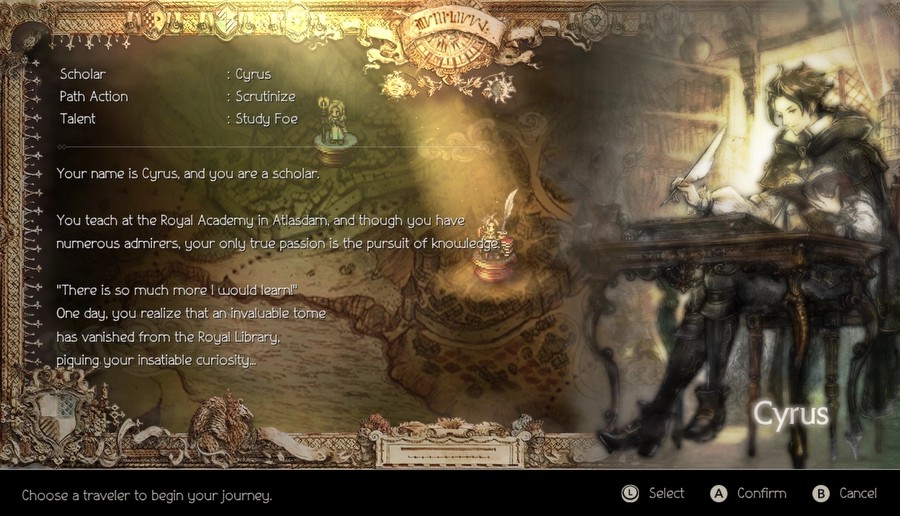 Name: Cyrus Albright
Age: 30
Job: Scholar - Scans enemy weaknesses and deals Fire, Ice, and Lightning damage. Uses the staff.
Path Action: Scrutinize (Rogue) - Deduce information about a NPC, potentially discovering item locations or information needed to resolve a quest. Has a chance to fail, which lowers with level.
Talent: Study Foe - At the start of each battle, Cyrus uncovers a random weakness for each enemy type.

Cyrus is the Black Mage of the group, with a focus on nuking enemies and breaking elemental weaknesses. His magic targets all and ends up being powerful, but he's a bit of a one-trick pony. It's a really good trick, though, and Cyrus is one of the better characters in terms of quality-of-life stuff, including a passive that reduces enemy encounters.

Cyrus is probably the character who differs the most from the first impressions. He initially comes off as a self-absorbed bookworm, and he still is, but he's actually very supportive and positive with everyone he meets, so much so that he ends up being the de-facto cheerleader of the party. He's also completely oblivious to a lot of social cues, most notably how popular he is with women. With his passion of learning and deduction, the best way I can describe Cyrus is a less dickish Miles Edgeworth. 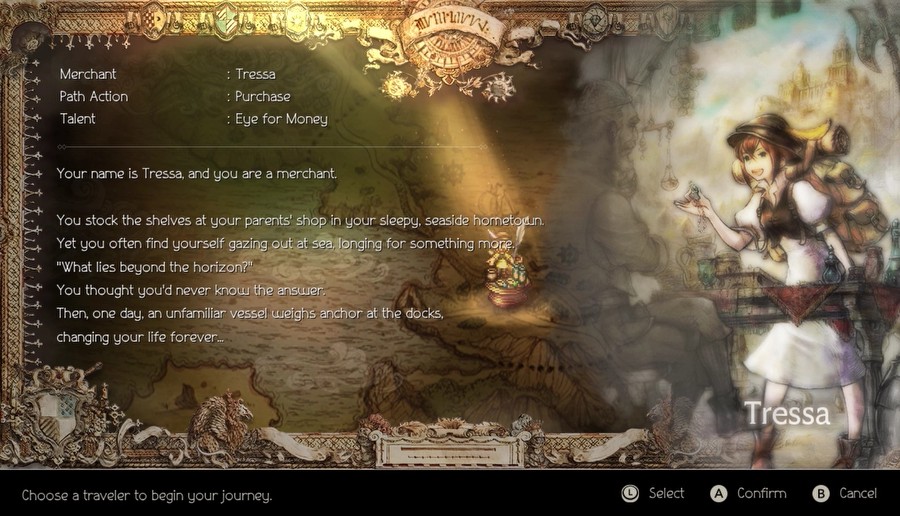 Name: Tressa Colzione
Age: 18
Job: Merchant - A hodge-podge of abilities, including collecting money from foes, self-buffs, and inflicting Wind damage. Uses the spear and bow.
Path Action: Purchase (Noble) - Buy specific items from NPCs, with a chance of automatically haggling the price down.
Talent: Eye for Money - Have a chance of randomly collecting money every time you travel into a new screen on the overworld.

Tressa does a bit of everything. She has some offensive options with Wind magic and her weapons, she has some self-buffs to evade and recover from damage, and she can even spend money to summon mercenaries to attack for her. She even can take money from foes! She has some surprisingly strong tools in her skillset, which will carry her throughout the entire game.

Tressa's probably the fan favorite of this bunch. She has the most upbeat story by far, and her enthusiasm and passion for her career as a merchant follows through in everything she does in the game. She also serves as comic relief, and is always fighting to assert herself as the youngest of the travelers. Her demeanor is infectious, and it's easy to see why everyone loves her so much. 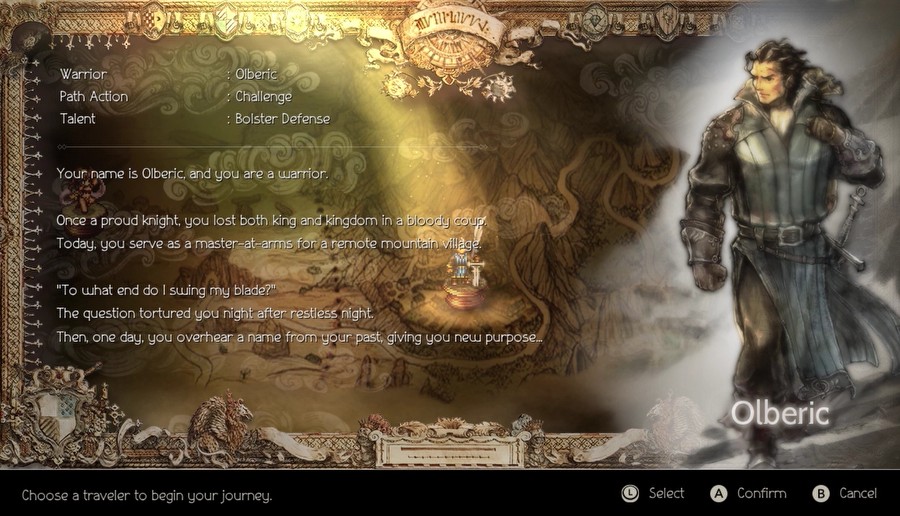 Olberic is the physical powerhouse of the game, able to take and deal solid amounts of damage. Olberic's skills focus on boosting and spreading out the damage output from his swords and spears while also buffing Olberic up.

Olberic is pretty straight-laced, as you may expect. He gets a bit melodramatic at times, but I feel his voice actor has the perfect amount of ham for the role. Plus there's just something about going into a new town and having Olberic beat up every NPC he meets in the name of having an honorable duel that somehow never gets old. 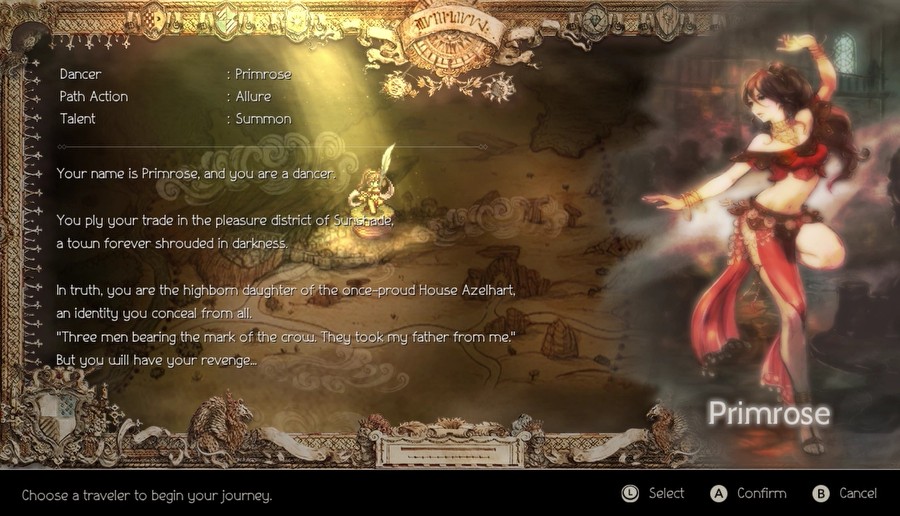 Name: Primrose Azelhart
Age: 23
Job: Dancer - Apply a variety of buffs, as well as utilize Dark magic attacks. Uses the dagger.
Path Action: Allure (Rogue) - Recruit a NPC to follow you around. Has a chance to fail, which lowers with level.
Talent: Summon - Summon a recruited NPC into battle to use special attacks.

Primrose is a support character, with a large focus on buffing allies, though her Dark-elemental magic can carry her a bit as well. For some reason, Primrose and Ophilia are the only two characters to have the same exact talent, though it helps her out as much as it does Ophilia. Buffs are pretty solid in this game, and Primrose has some fun (and chaotic) abilities at her disposal, including one that can accidentally break the game in half.

Primrose is single-minded in her goal, and despite the facade she puts on, she's a serious and determined individual that always carries an air of pride and confidence. Once the game gets to the point where the characters interact, though, Primrose is like a whole new person, more flirty and fun and lighthearted, which is nice considering how grim her story turns out. Fair warning, Primrose's story has some problematic material that I'm not really sure is handled in the best way. 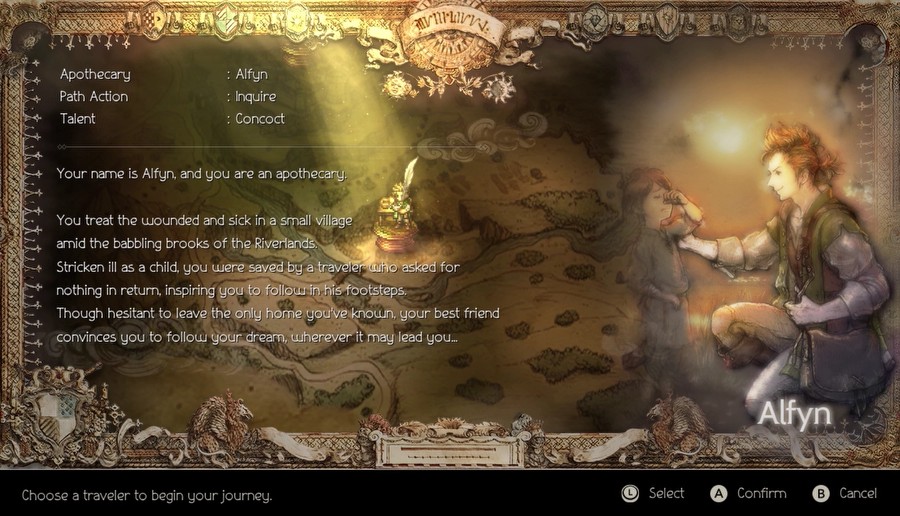 Name: Alfyn Greengrass
Age: 21
Job: Apothecary - Heals and revives damaged and ailing characters while utilizing ice and axe techniques. Uses the axe.
Path Action: Inquire (Noble) - Speak to a NPC to learn information about them, potentially discovering item locations or information needed to resolve a quest. Most NPCs require a minimum level to be Inquired.
Talent: Concoct - Can mix two ingredients in battle to achieve a variety of beneficial or harmful effects.

Alfyn's a decent-if-limited healer with his Apothecary abilities, lacking the full-party healing of Ophilia in exchange for being able to heal status effects. He also has a couple good axe attacks, can use an ice attack, and can even inflict poison. However, as it generally is in these games, Concoct's ability to mix two items together renders Alfyn one of the most useful characters in the game, as these concoctions can heal the party, recover SP for attacks, or break through the elemental shields of enemies with the chance of status effects or debuffs. It's surprisingly diverse and ends up being one of the best healing options in the game, if nothing else.

If Tressa is a hardcore capitalist, then Alfyn is a hardcore socialist. He's a good ol' hick Southern boy who just wants to see the world and help everyone he can, even if it means less coin in his purse. He's also a raging alcoholic. The guy's always upbeat and ready to help out whoever he can, however he can. 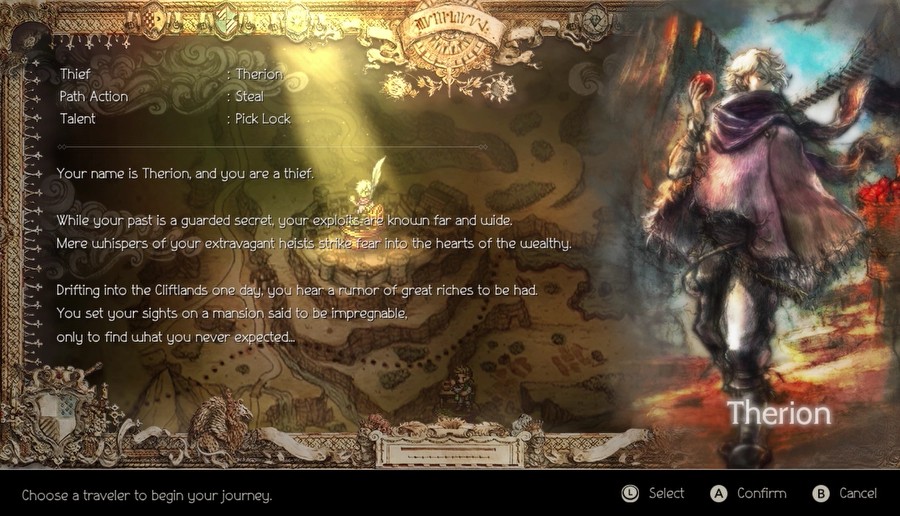 Name: Therion
Age: 22
Job: Thief - Steals items and utilizes debuffs, dagger techniques, and Fire attacks. Uses the sword and dagger.
Path Action: Steal (Rogue) - Can steal items from NPCs. Has a chance to fail, which lowers with level.
Talent: Pick Lock - Can open all purple chests found in the overworld.

That "Pick Lock" talent is particularly annoying, as some really good treasures can show up in them and only Therion can open them. Otherwise, Therion's dagger attacks are surprisingly strong, and his debuffs help out a lot against powerful foes. His main weakness is having no good area attacks, but against solitary foes he excels.

Therion's the bad apple of the bunch, and there's some interesting conversations with the other characters involving him being a thief. He's sarcastic, a loner, and really an all-around dick, but he's also good at what he does, and has a good sense of pride in his work. Plus he can't be that bad a guy if he's traveling with the rest of these people. 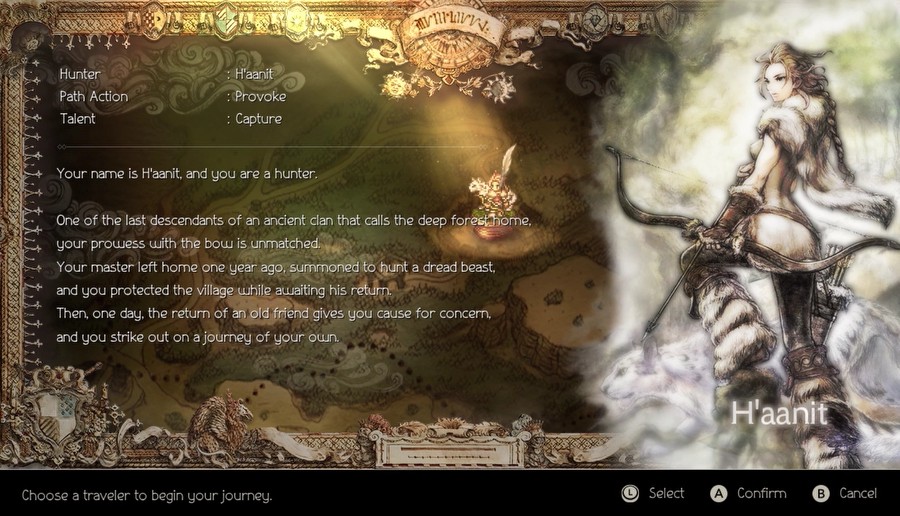 Name: H'aanit
Age: 26
Job: Hunter - Focus on bow and Lightning attacks, along with other various gimmicky stuff. Uses the axe and bow.
Path Action: Provoke - Can use monsters to fight NPCs. No limitations on who can be Provoked, but town reputation takes a hit if H'aanit loses.
Talent: Capture - Ability to capture and use up to six monsters in battle. In addition, H'aanit's animal companion Linde is always available to be summoned.

H'aanit's unfortunately probably the weakest overall, since while Capture starts out great, it ends up being weak in end-game due to how terribly the capture rate scales, and Hunter itself has a few duds for abilities. That said, Hunter does have arguably the best debuff in the game and the ability to utterly shred the defenses of any enemy weak to bows, and H'aanit herself has some strength to her. Besides, all these weaknesses can be covered up in the late-game anyway.

We can't discuss H'aanit without mentioning her speech, which is this odd mix of the usual half-assed Ye Olde English and a bizarre love of applying the suffix "-en" to every verb possible. It makes her conversations seem a bit awkward, but on the other hand, her battle lines are actually improved with her weird dialect. Otherwise, H'aanit is generally serious and matter-of-fact, and of course very skilled as a hunter, but also very aloof when dealing with people in general.

And that's all eight of our future companions! So you know what's coming next...

VOTE FOR WHICH ONE WE SHOULD PLAY AS! VOTE AS MANY CHARACTERS AS YOU WANT TO SEE!

I'll be getting all eight and showing off all their stories, so you're basically voting for which character you want to see permanently in our party and serve as the de-facto leader of this ragtag group of travelers. Don't worry about gameplay stuff, I can and will work around everything, just pick whoever seems coolest to you or whatever other dumb criteria you want.