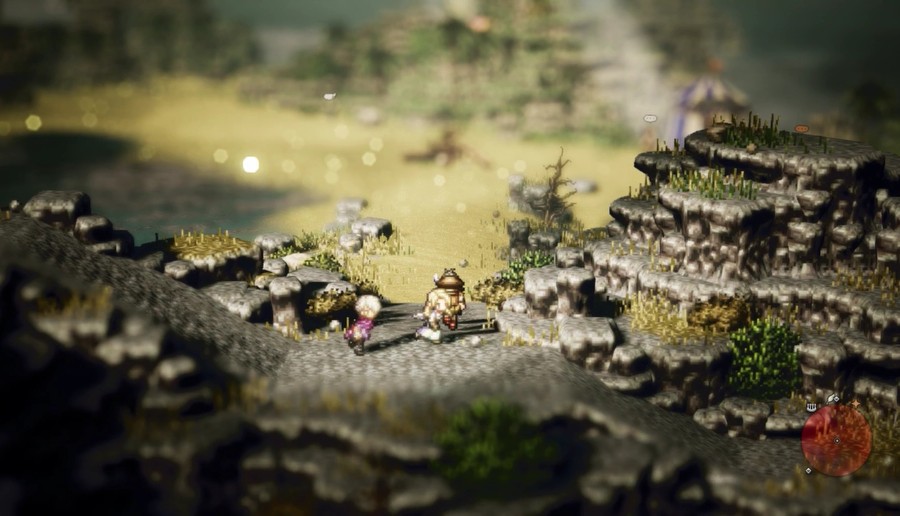 And so today we end Chapter 4 by checking up on one of the first people we met after starting our journey. 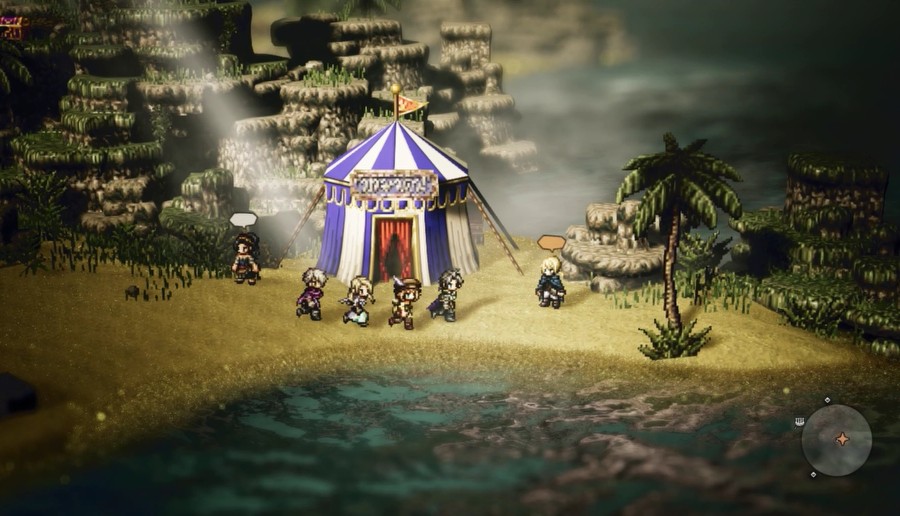 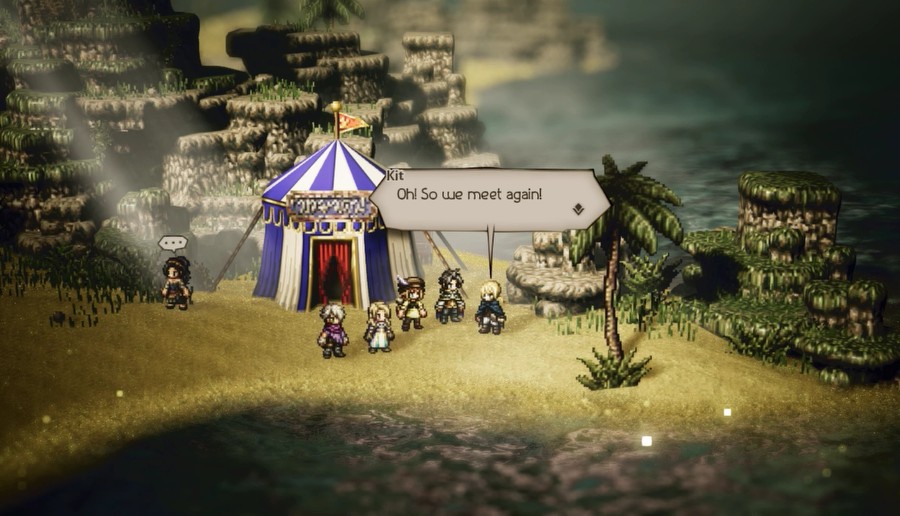 It's me, Kit! I've been traveling with the troupe ever since you helped introduce me. 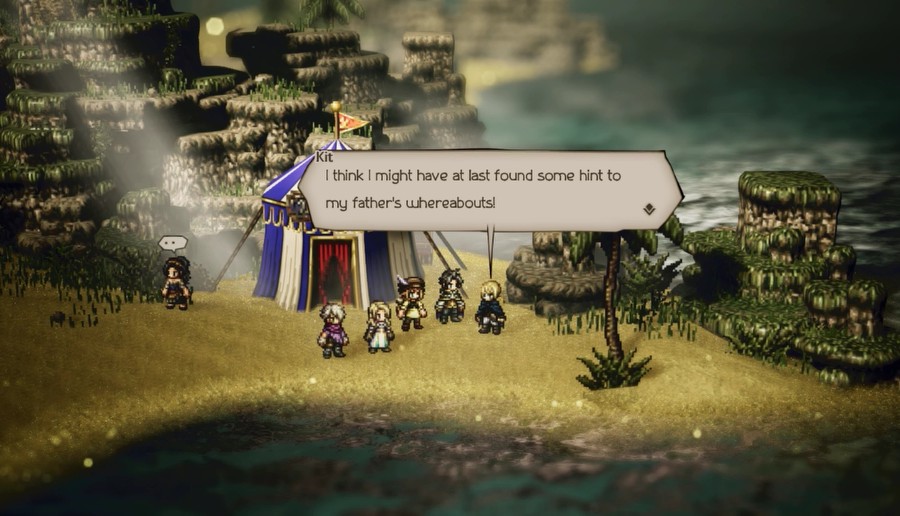 But I'm afraid it's in the direction opposite of where the troupe is headed... If I hope to ever learn what happened to my father, I will have to part ways with everyone... 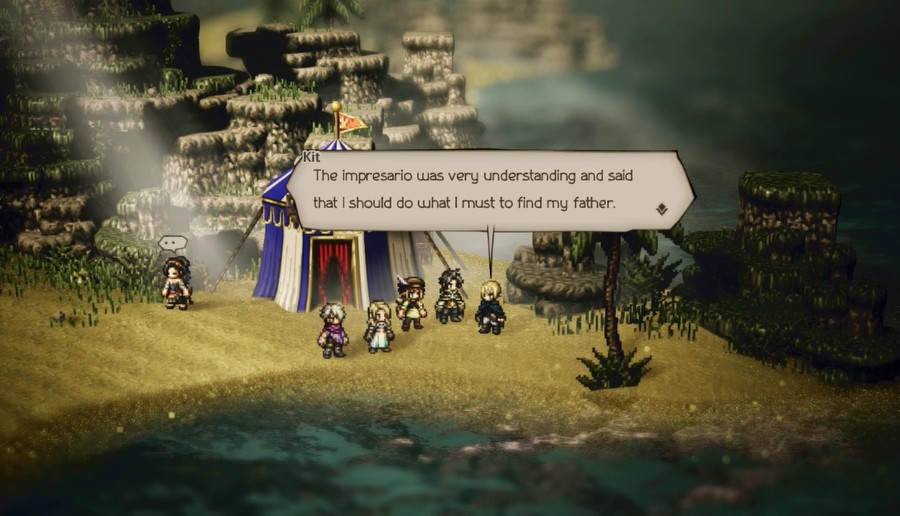 But I wish I could do something more to tank the troupe for taking me in before I must leave them...

This is a pretty vague task, but perhaps talking to the only other NPC in the vicinity will help us out. 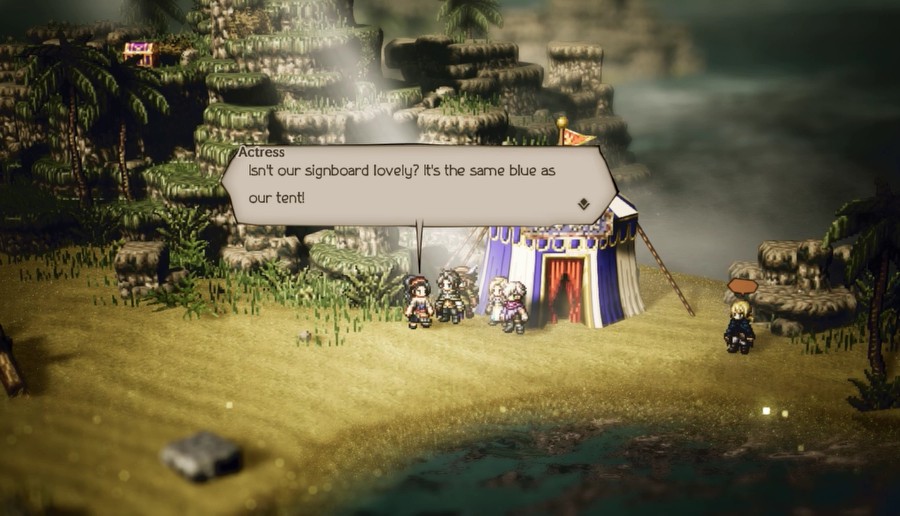 That said, it's gotten a bit old. We should probably give it a new coat of paint. 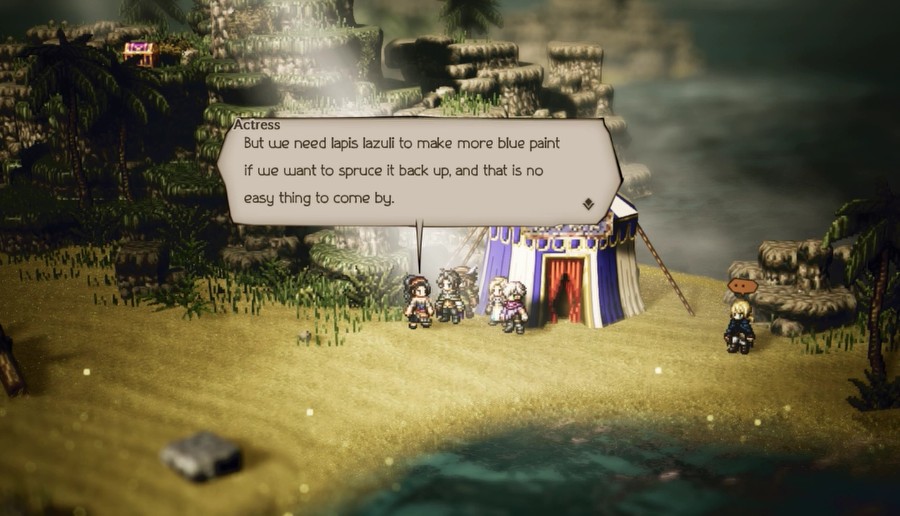 So our final task of Chapter 4 is to help get materials to paint a sign. The authentic Octopath Traveler experience. 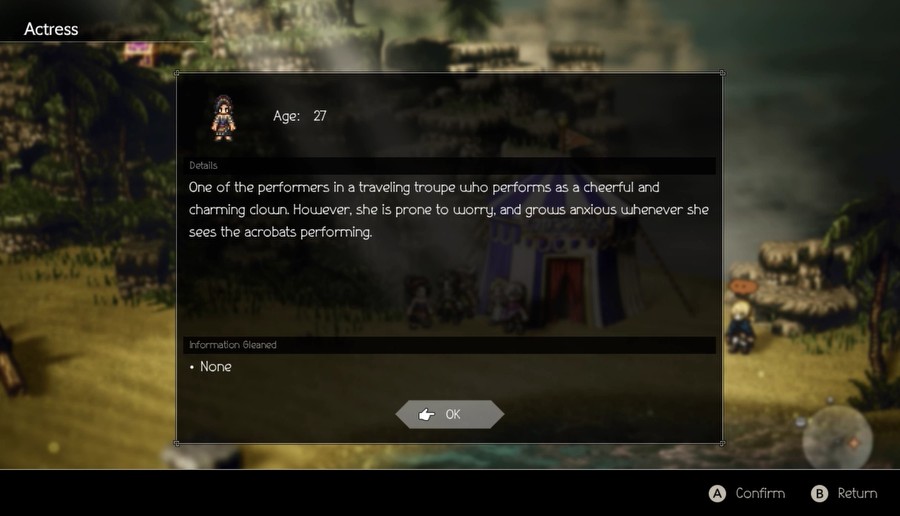 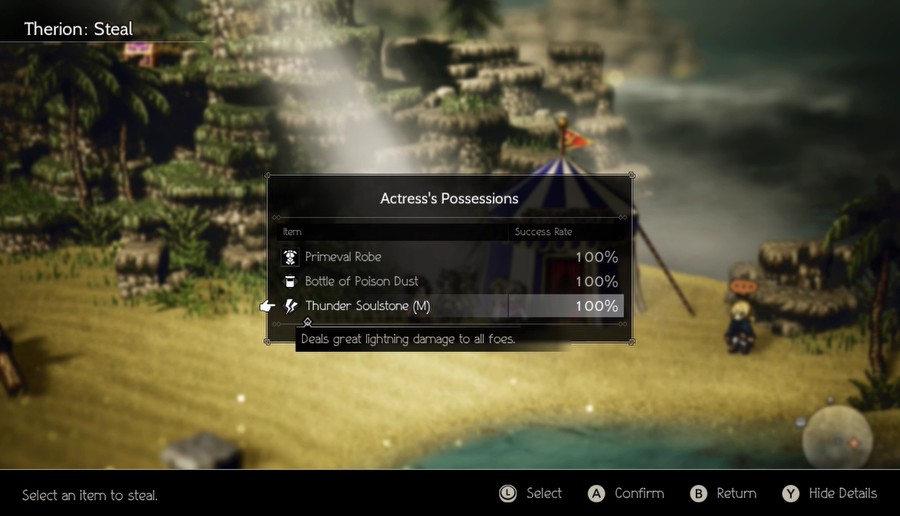 For some reason, you can't purchase from the actress, only steal. 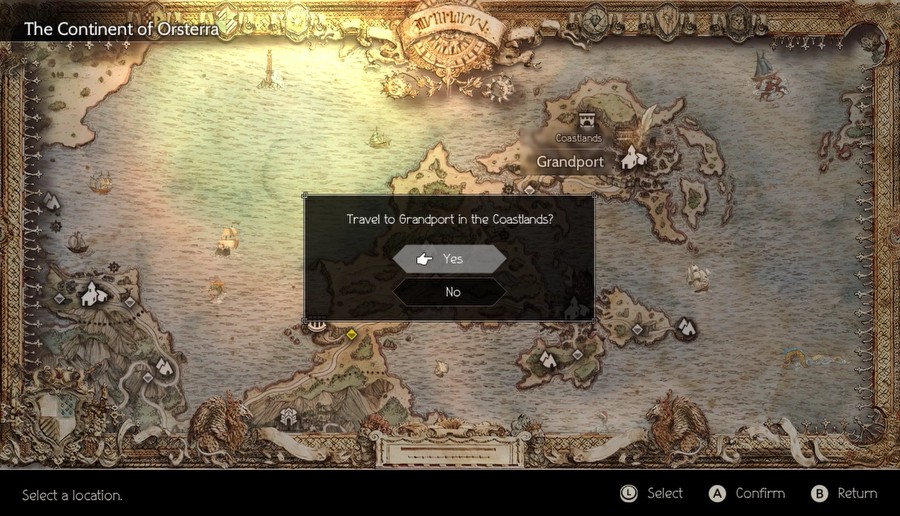 We need to find a gem, so what better place to start than Grandport? 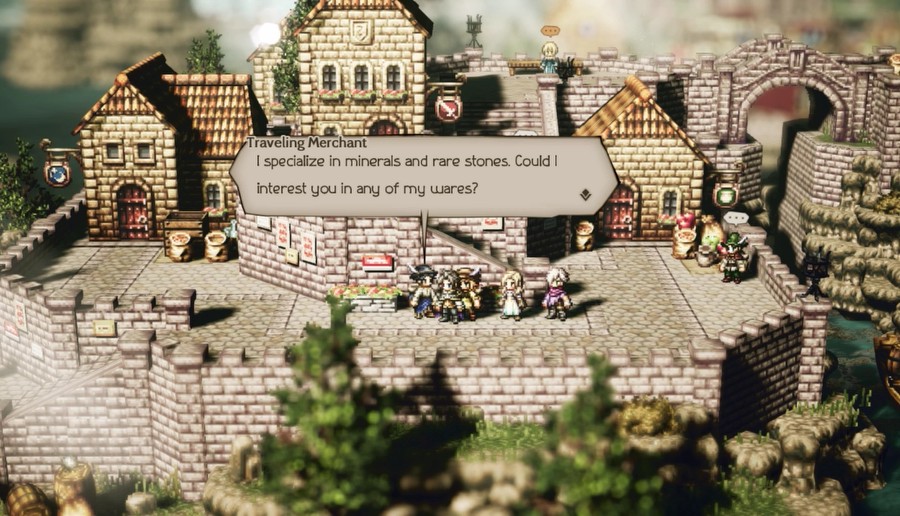 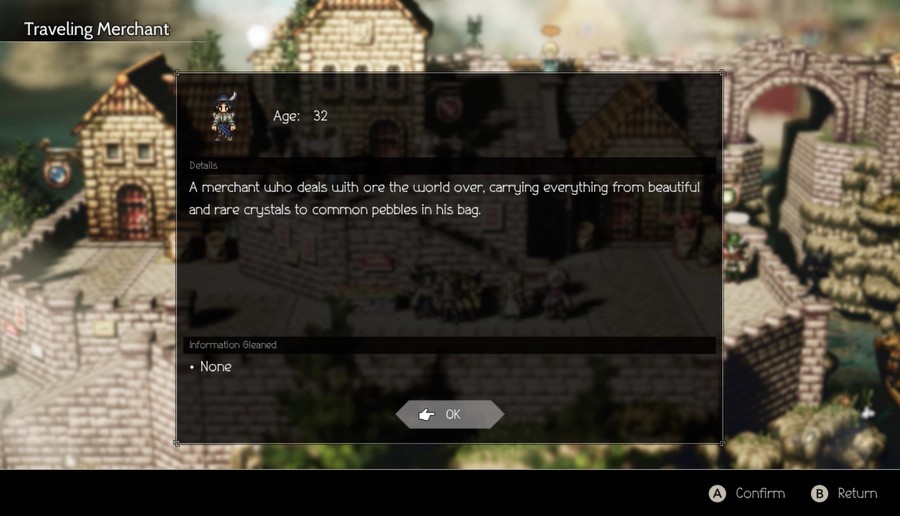 Perhaps this person who specializes in rare stones has the rare stone we're seeking? 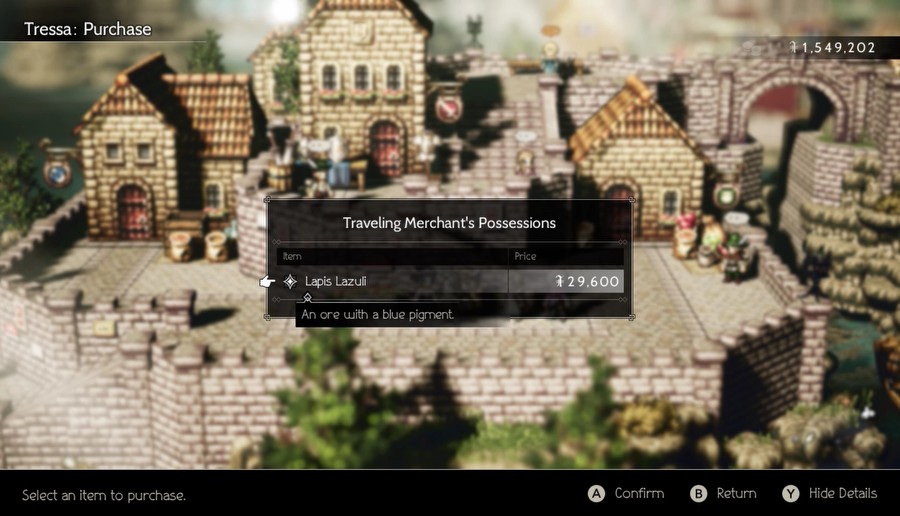 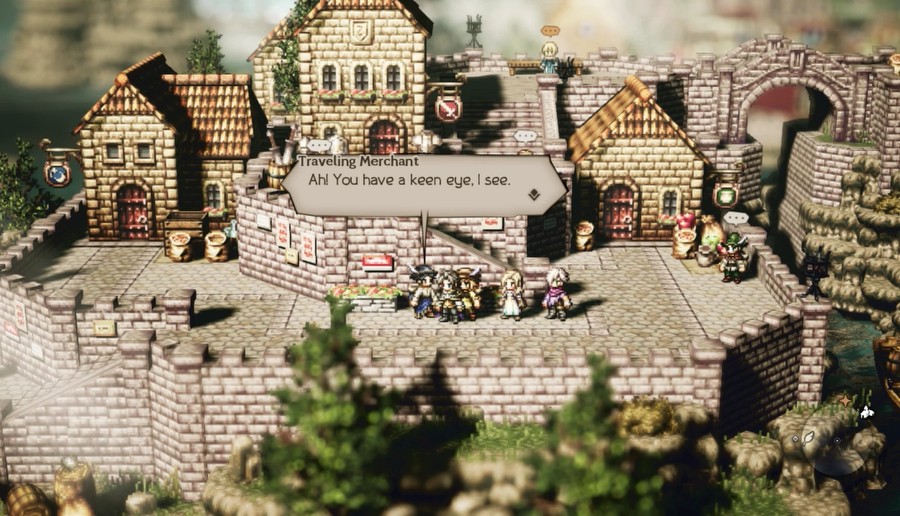 Like I would have shown this person if they weren't relevant! 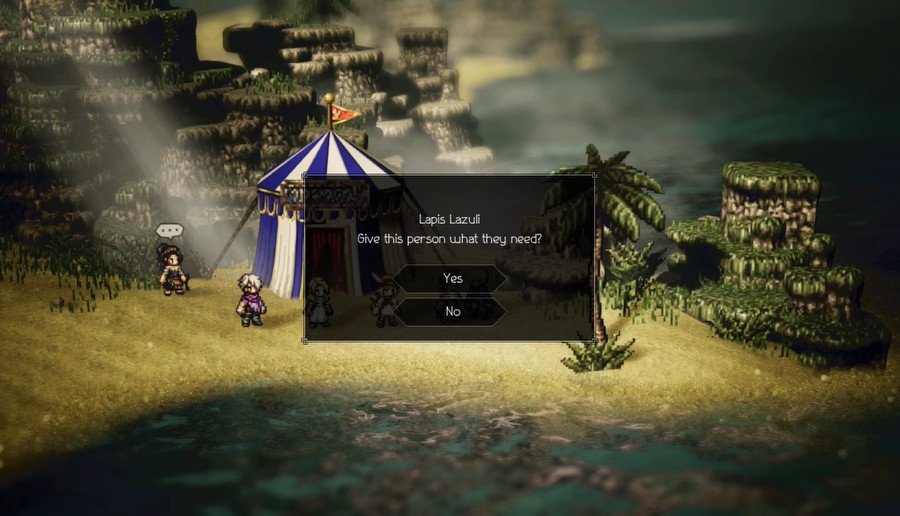 With that daunting task out of the way, let's watch Kit paint a sign. 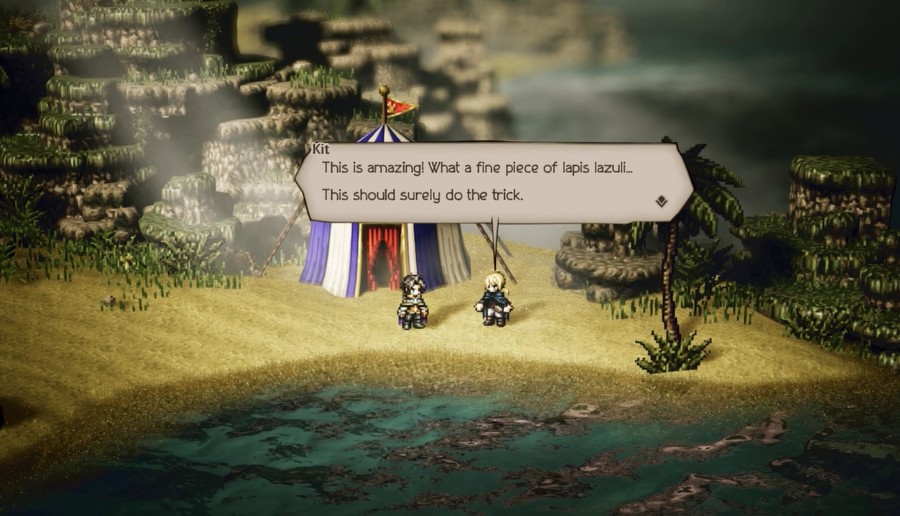 I will repaint the troupe's signboard and restore it to its former glory! I'm going to get to work preparing the paint at once! 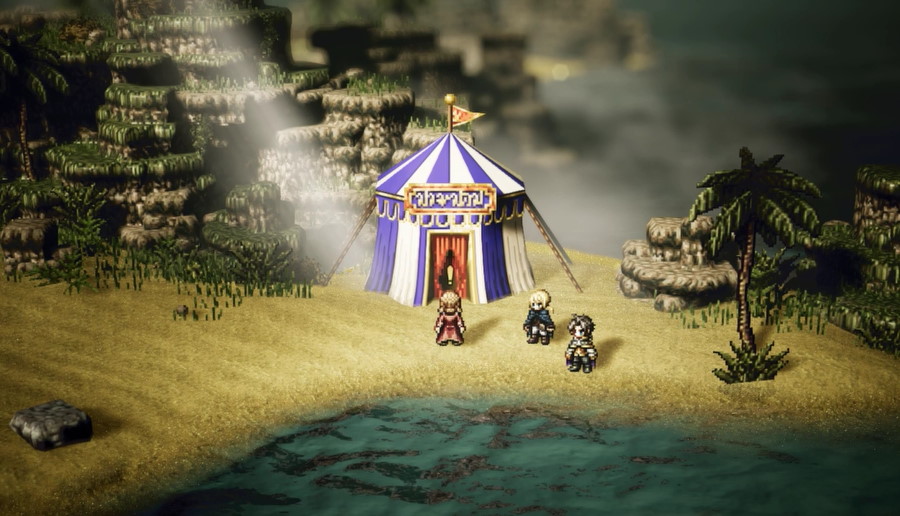 There's the sign. It looks exactly the same as it did before. 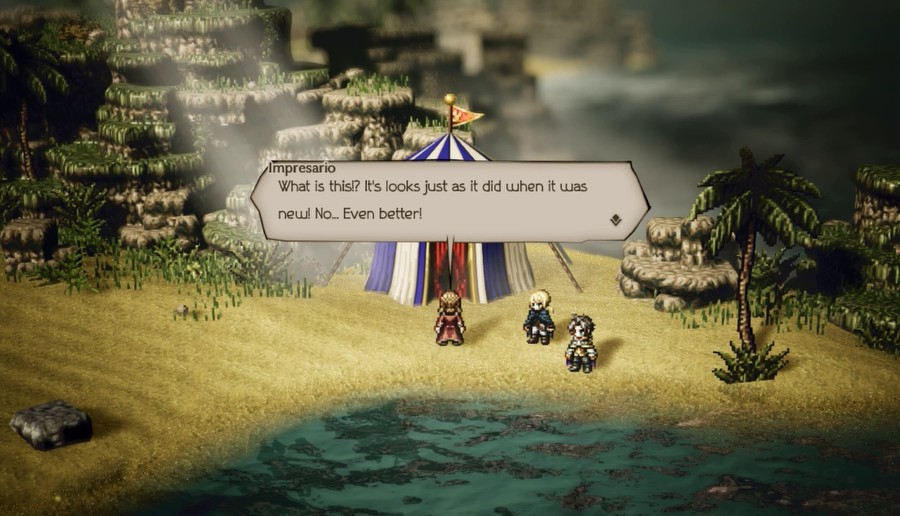 I did, with the help of my kind friend here, who helped me get the ingredients for the paint.

You did!? But it requires lapis lazuli... Such a precious mineral... 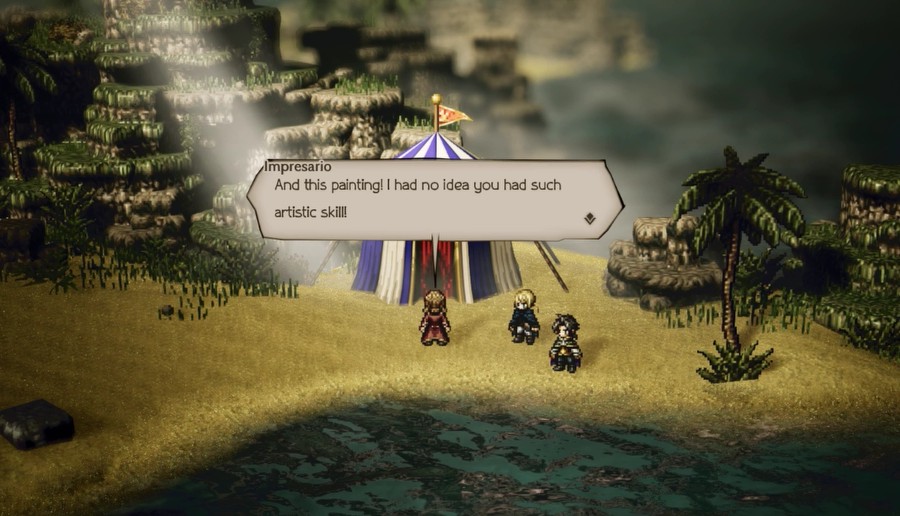 I knew you had some skill as a stagehand, but you have real talent, Kit! This is... Why, it's positively magic what you've done! 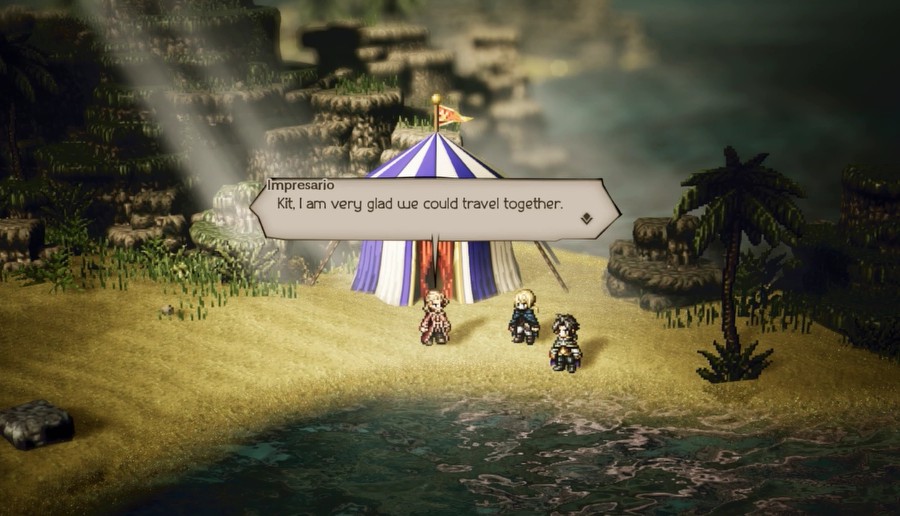 I will be praying that everything goes well for you. 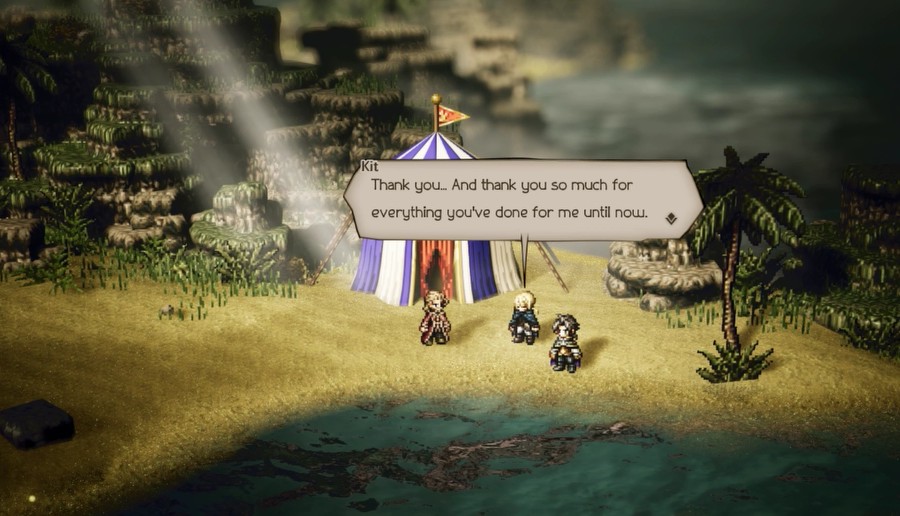 And that's goodbye to the Impresario. 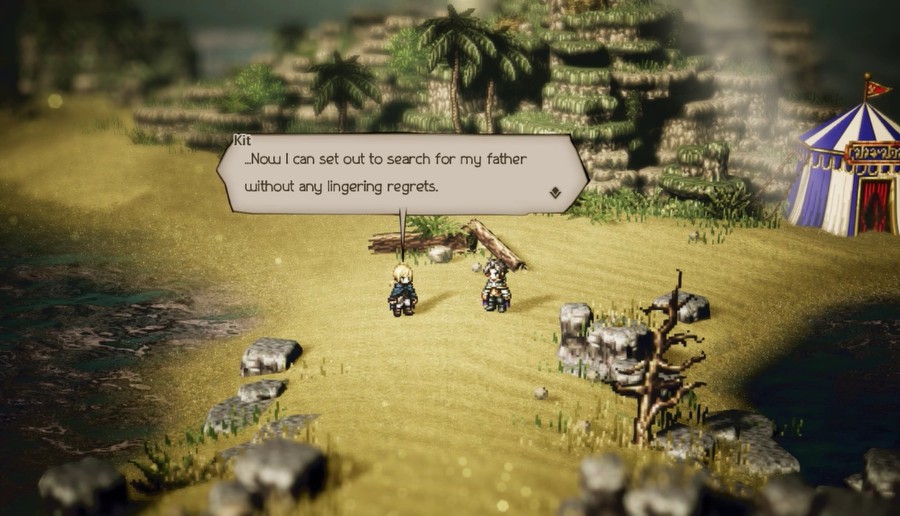 I've heard word of a woman who knows of my father's whereabouts. 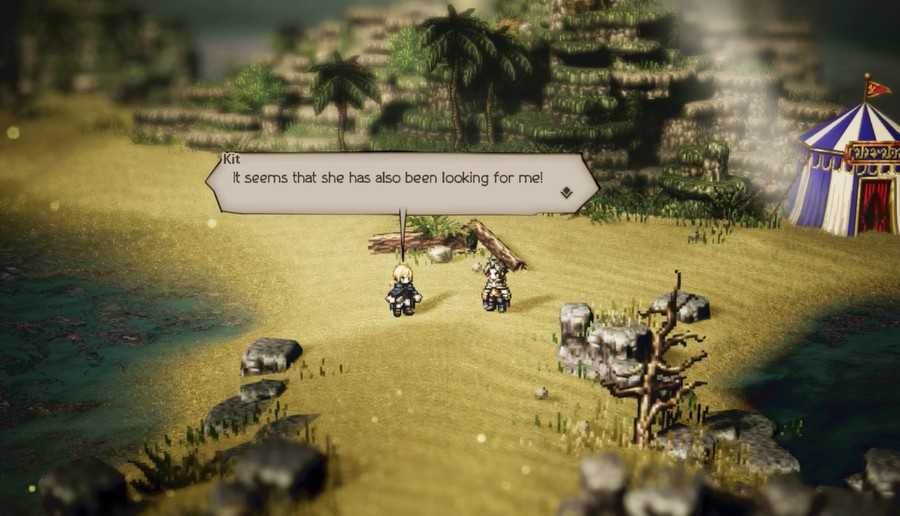 I must find her and learn what she knows. 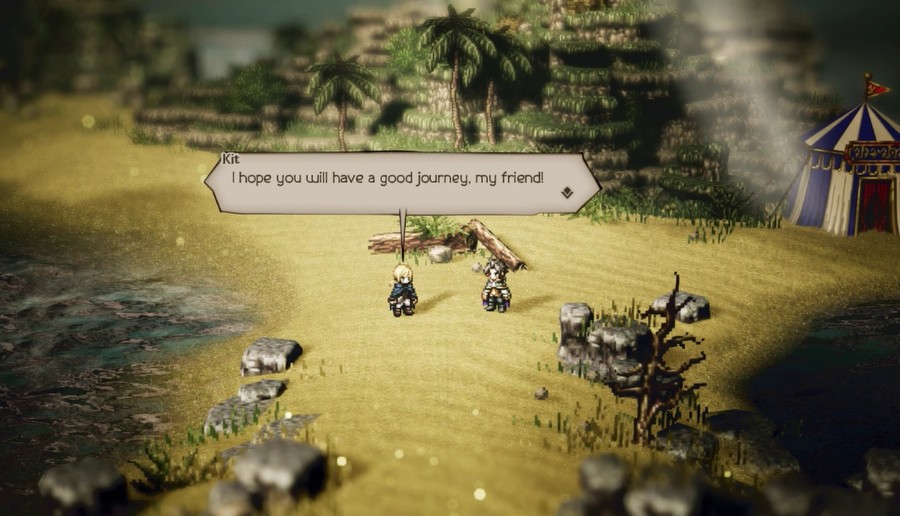 Here's hoping his encounter with that woman turns out well! 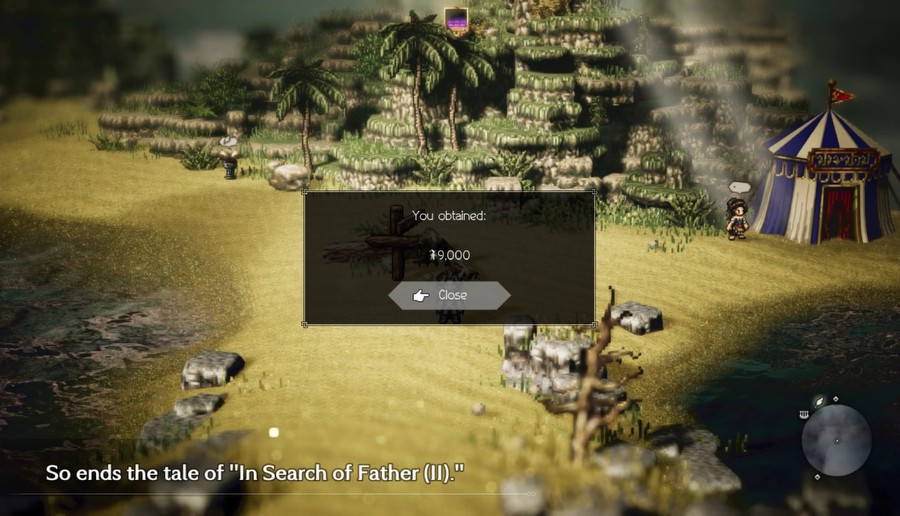 Also this only covers a third of the cost of that lapis lazuli. 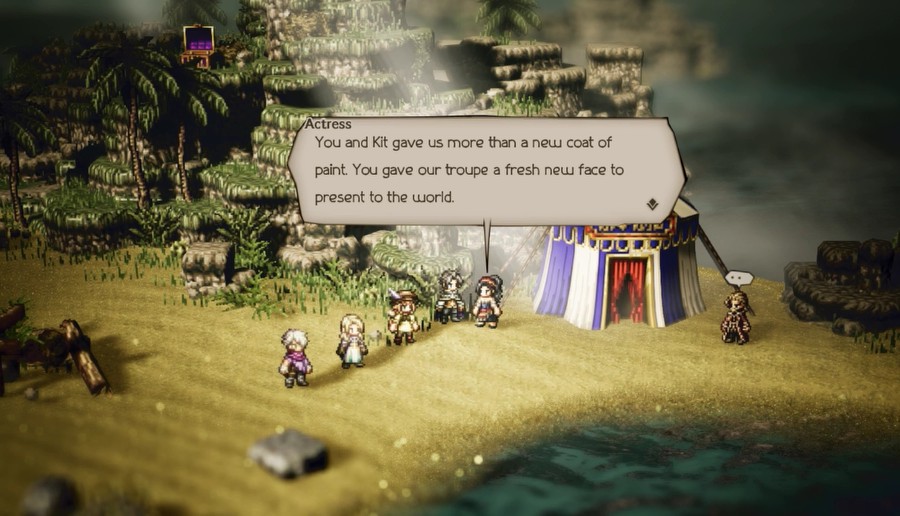 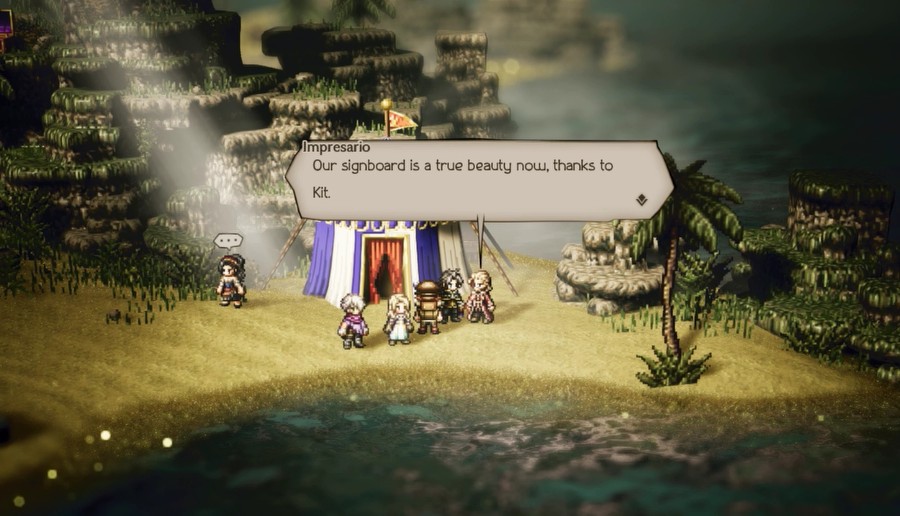 I do hope he finds his father, safe and sound.

We will eventually get a resolution to Kit's travels, but it will take just awhile longer.

At any rate, that's all for Chapter 4! So all that's left is the post game! Which is pretty much meeting up with and doing side stories for many of the characters we've met on this journey as we accumulate the best gear in the game. There will also be one very challenging boss, and there's a final boss that ties everything together. We also have twenty more party banters, this time involving three or even four characters talking to each other, though I'm saving all of those for mid-August when I'll be on vacation. Basically, this is going to be one giant victory lap, so kick back and enjoy the ride!

Next time, we'll start things off by revisiting all the Chapter 1 towns and checking out all the various characters that have popped up since we've completed all eight stories!