Welcome to Breaking Chrono Trigger! This series of articles is going to be me mucking around with character change codes in Chrono Trigger because I think it'd be funny and I probably should actually try adding content to this web site. Expect updates on Sundays, though not necessarily every Sunday. I'll try to post them as often as I can, though!

Not recommended viewing on mobile data since it's pretty GIF heavy.

There are codes that let you change the party member in each position. If you're curious, they are:

Any higher values are glitchy, though I believe it's FF that changes the position into an empty slot. Don't quote me on that, though.

So let's get started. First off, what happens if you replace Crono in the introductory scene?

Well, things certainly start off on a somber note! This will be the theme of Breaking Chrono Trigger, as the game handles events based on what characters you have present, so if those required characters aren't there, or if you have characters earlier than you're supposed to, things get nutty quickly.

In this case, if Crono is not in the party, the game simply doesn't see Crono. Crono's Mom talks to nothingness while assuming everything's going on as normal. It doesn't matter who's actually in the party, Crono isn't there, so who cares? Anyway this is of course a softlock, so let's add Crono but tweak things a bit. What happens if we go ahead and add a full party? 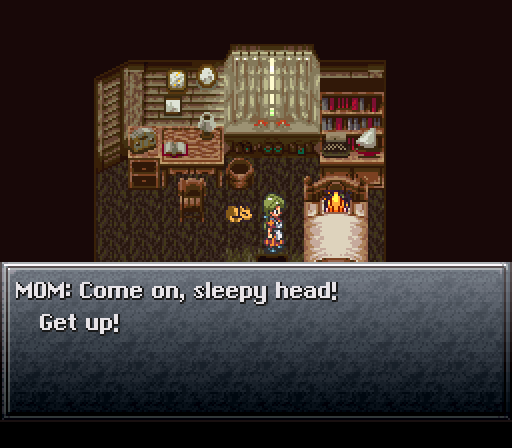 Strap in, folks. Things are gonna get weird here. 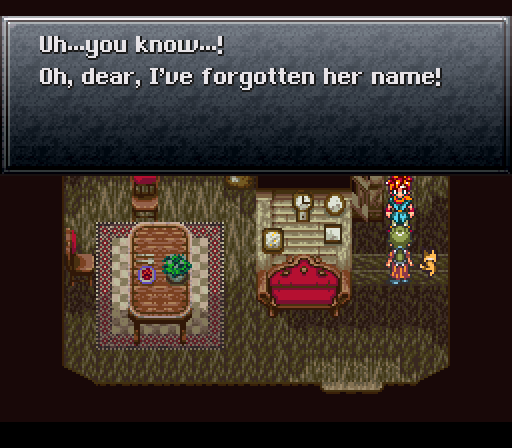 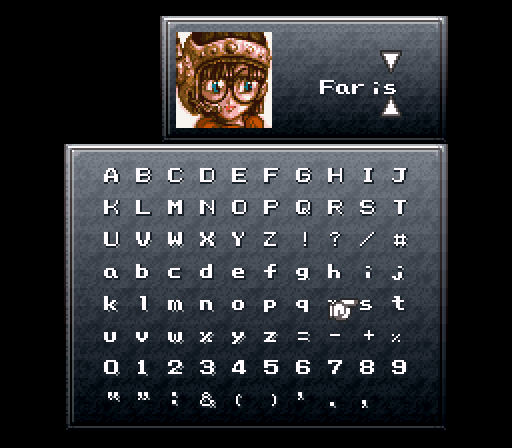 I'm going with a FF5 naming scheme here because, well, why not? We can't really avoid naming Crono or Lucca, but things will get a bit interesting in regards to naming Marle later on.

Crono's Mom triggers a minor cutscene each time you talk to her with a new character in her party. Since we already started the game with Marle and Lucca, we immediately trigger this after we get our starting cash from Crono's Mom. Note that she spends the rest of the game after this part in the kitchen area, so the positioning is rather awkward here. 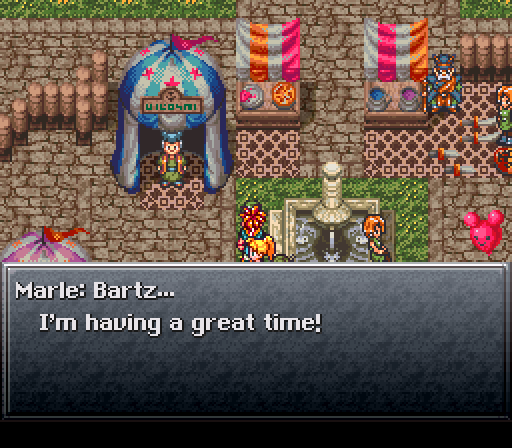 Having Marle in your party has you skip meeting her, and in fact you can immediately talk to one of the NPCs that triggers access to the Telepod and walk right in. Oddly, you'll skip the part where Marle stops to get candy, since it only gets triggered after naming Marle for some reason, and if we can't bump into her, we can't name her! 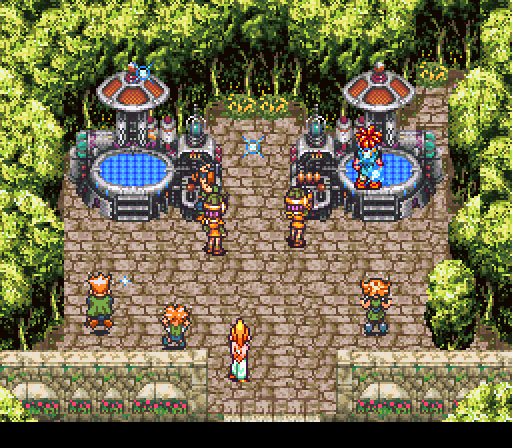 Having two Luccas doesn't really change anything. The other Lucca has some weird pathfinding and can walk off-screen, but otherwise the scene plays out as normal.

Now you may be wondering, what happens if we add multiple versions of a character? 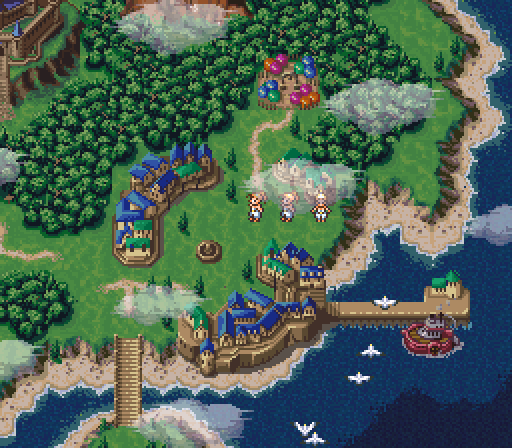 Honestly, nothing too exciting. The extra characters will show up on the map screen, but when you enter an area only one will show up, including battles. You might as well just have two blank slots at that point. 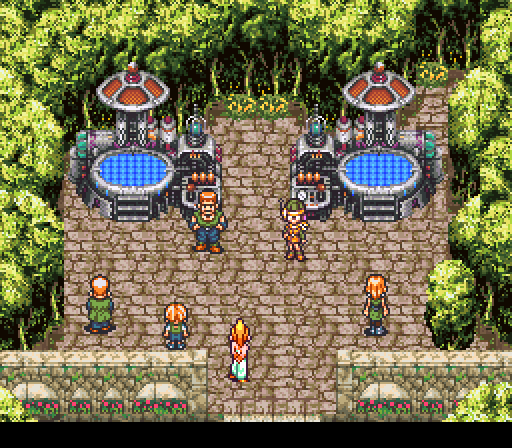 Anyway, what happens if we take these Marles to the Telepod? Since, Marle leaves the party upon entering the area, our party is now empty and the game softlocks.

So let's fix that! Next up, what happens if you have Marle and some other characters, but not Crono?

The teleport animation requires Crono's sprite, so without him, it's just the same thing happening...without Crono. I guess moving the sparkles are kind of impressive, though! 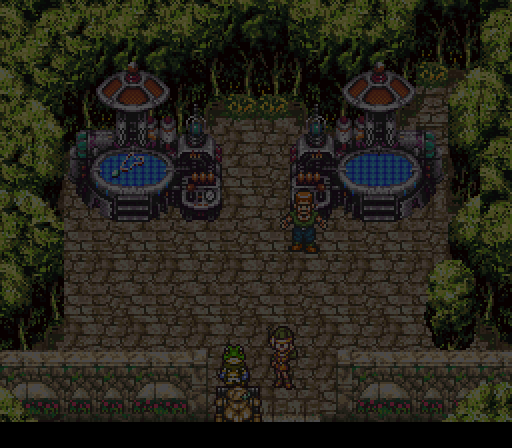 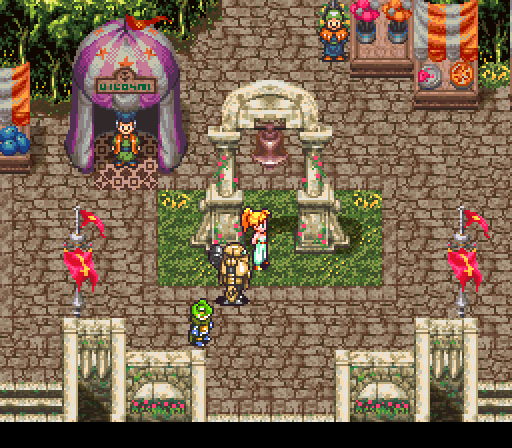 If Crono is not in the party, you can actually leave after Marle vanishes. I guess the game checks if Crono is the one leaving since, well, who cares if the other characters leave? And because these codes are always on, once we leave Marle is added back into the party.

And if we come back a second time, everyone's now gone besides Taban and...Marle? Lucca speaks as normal, at least until it's time to send Marle2 away again, and then...the game softlocks. 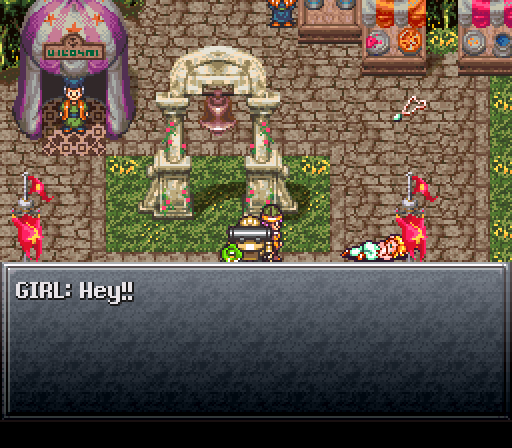 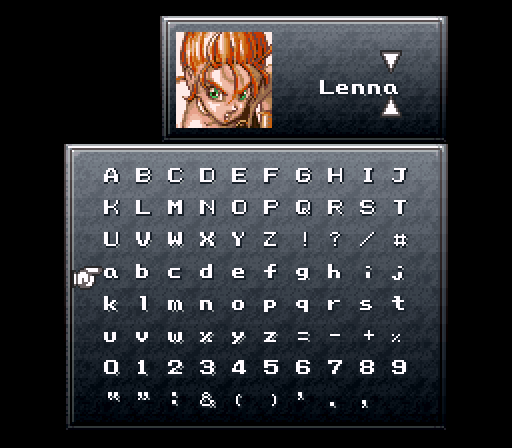 Now, let's remove Marle and get her the normal way, which means we can rename her. Of course, with our current codes always on, this means Marle isn't actually added to the party, but we also cannot progress the game without her in our party, so I add her back in. This does now trigger the candy cutscene, but now it's...different.

Marle now gets stuck in a loop, eternally indecisive about whether or not to get some candy. In many ways, Chrono Trigger parallels closely with real life.

You'd think Crono being there would solve this problem, but alas, he simply makes matters worse. No, Lucca is the problem here, her intellect intimidating Marle and Crono to the point that they'd rather spend the rest of time itself gorging themselves on candy than truly understand how insignificant they are in the grand scheme of things (you know, even though they'll eventually become saviors of the world and all). 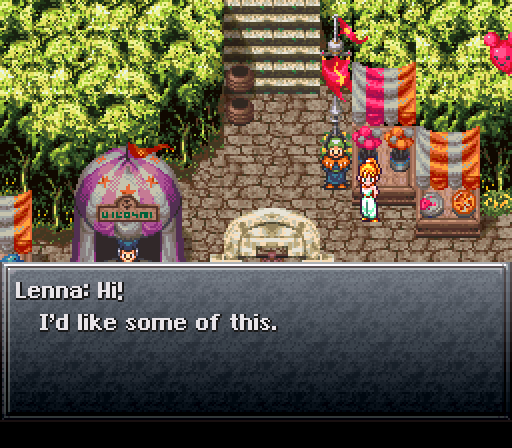 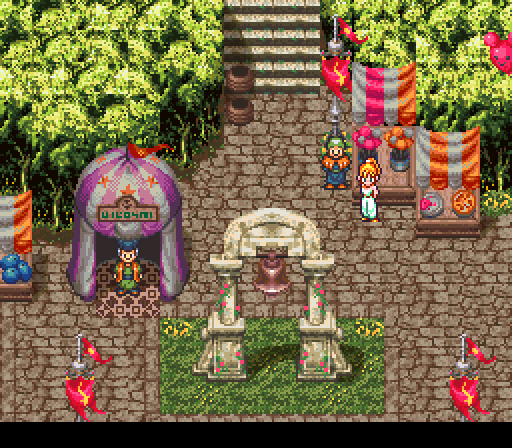 If Marle is alone, she has the confidence to finally choose the candy she wants, but then...she just stands there, assumingly eating the candy for an eternally lengthy amount of time. So I guess we do need Crono back after all. 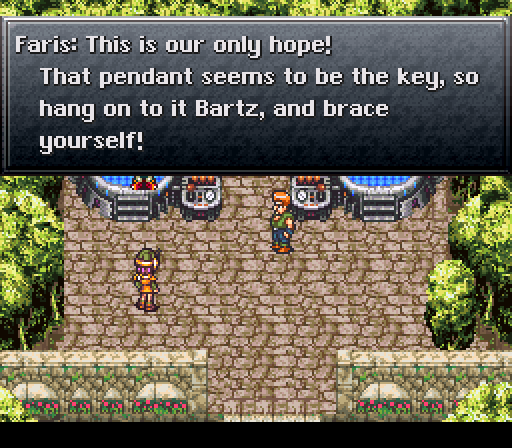 We've had our fun, but it's time to move on from the Millenial Fair. We go in with Crono and Marle, and now that we're actually playing by the game's rules we finally get to progress to our first new time period. 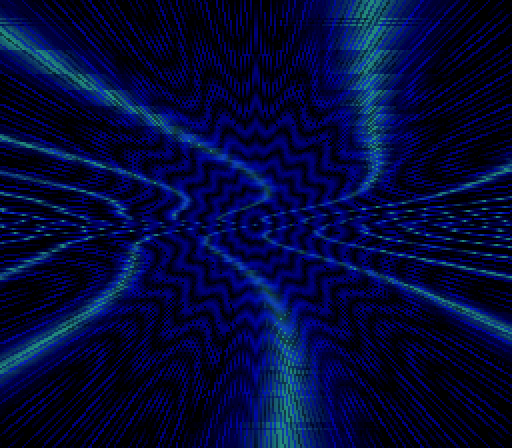 Next time, we'll enter the Middle Ages and proceed to break time and causality itself over our knees.