This is Part 2 of Breaking Chrono Trigger, where I play around with party member codes to see how badly I break the game's scripting. Due to the numerous amount of GIFs and MP4s, I don't recommend viewing this on mobile. Today, the Middle Ages! 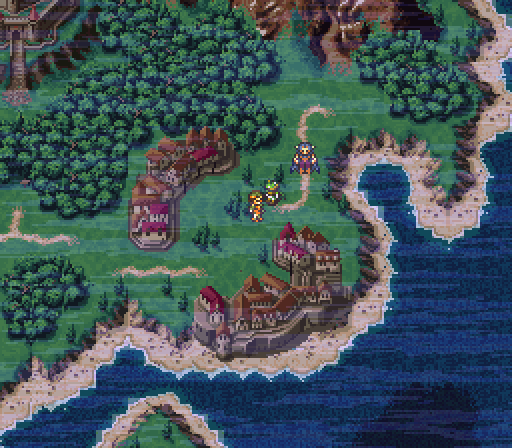 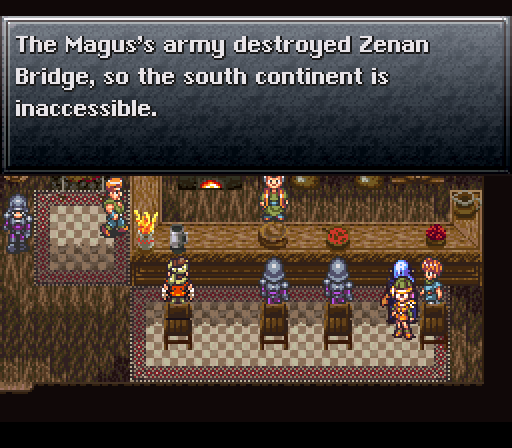 At first, nothing seems affected by character slots. It may seem strange that no one cares about Magus but, uh, that's also true in the original after you get him. For a bit, I was worried that the Millenial Fair would be the highlight and I'd have little to show off here. Fortunately, I was wrong. 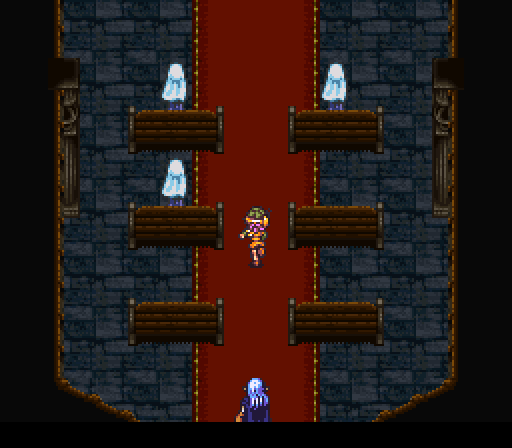 This one is pretty minor, but if Frog is in your party when you enter the Cathedral, he's not there. Your other non-lead party member will also just stay in place. We'll dive more into the wonkiness of the cathedral a little later. 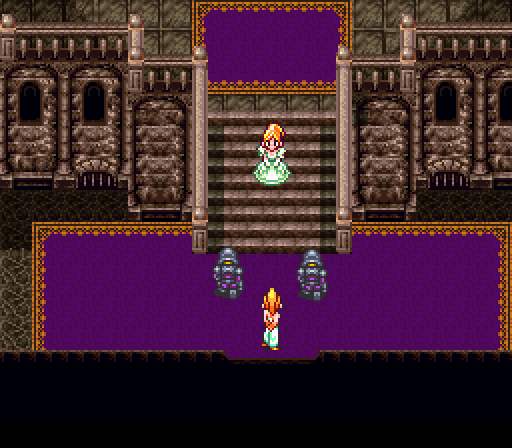 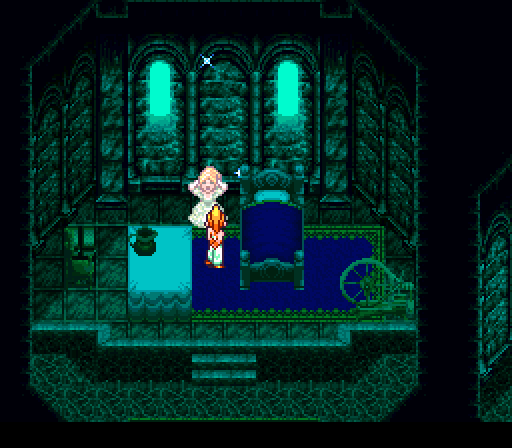 Marle meeting Marle doesn't trigger any funny business since it's technically a different sprite. That will change after Middle Ages Marle changes clothes during her brief stint of nonexistence. But what about Lucca meeting Lucca?

The game can't handle two sprites from the same character at once (besides the clones, of course), so once it's time for a new sprite to come in, the old one goes away. Fortunately once the cutscene's over, Lucca's playable again and the game functions as normal.

Now let's watch the Marle cutscene with Crono in a non-lead party slot. 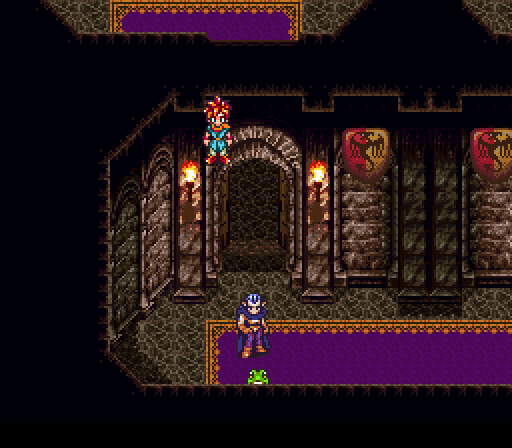 For the most part, CT's scripting only cares about which characters are present. If Crono's not there, nobody's going to react to Marle disappearing. Otherwise, Crono's always going to run to try to save Marle, even if he's a lot farther back than he'd normally be. Of course, this also briefly screws up how he follows the party, walking through walls at a distance. It fixes itself after you leave, though. 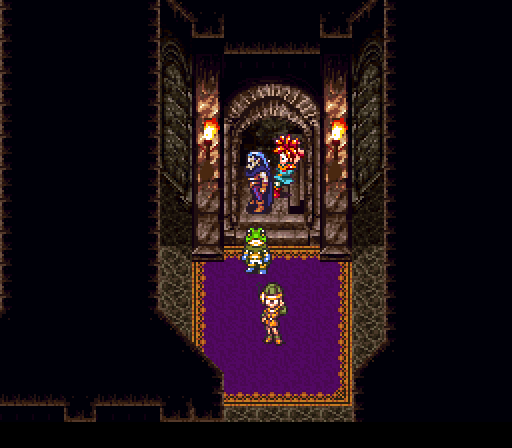 Likewise, when Lucca announces that Marle is actually Princess Nadia, Crono acts surprised. It doesn't matter what direction he's facing, the game says "At this point, briefly use the 'Surprise' emote for Crono" and it does it. If Crono's not there, ignore it and move on. It's a nice way to handle these situations and helps keep the game from breaking itself when the slightest thing goes wrong...though of course it doesn't always help.

As an aside, in most areas and battles, if you change the party, it won't actually change in-game until you either move to another screen or enter the menu. The world map's a weird exception, as given enough time your party will update automatically, which can cause some...odd glitches.

Anyway, after triggering the Marle cutscene, we can set up the first dungeon and meet Frog, and this is where things start getting interesting.

The Frog cutscene plays as normal, but since Lucca's not there to interject with dialogue, the game just skips Lucca's parts and has Frog go on like nothing's changed. It makes the scene a bit silly, but hey, it still works. 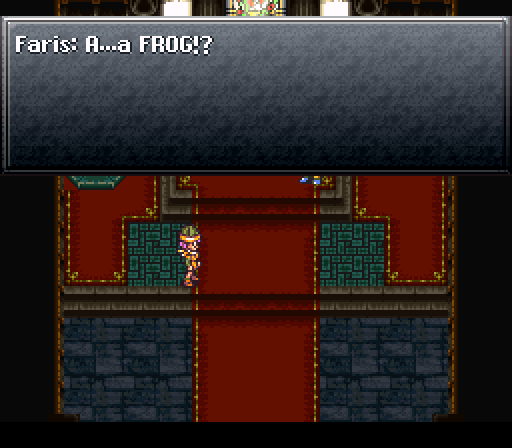 Crono isn't relevant here, all that matters is whether Lucca is present to give her dialogue, otherwise the game continues as normal.

Ah, but what if Frog is the lead for the party?

Frog's still gone, but you still gain control...sort of. You can only move up, at which point the game pretty much softlocks.

But...what happens if Frog is in your party when you trigger the Naga-ette battle?

Frog jumps in, just...under camouflage, I guess. Once he's "supposed" to come in, he'll come out from the spot he ended the battle in and things proceed as normal. After the cutscene, Frog rejoins and is back to normal. 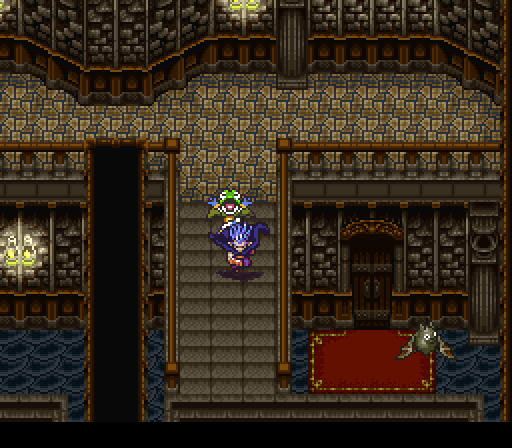 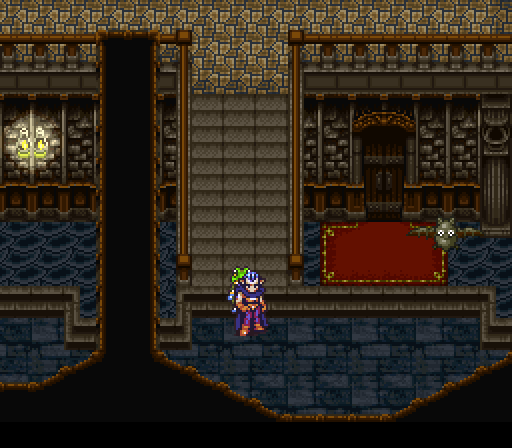 A rather weird glitch, if you slide down this stairway with only two characters, you won't be able to move your characters and the game softlocks. Don't ask me why, I have no earthly idea. Might as well throw Ayla in since she hasn't seen any action yet.

Like before, if Frog's not in your party, the game just skips his lines. Otherwise, the rest of this dungeon's got nothing interesting for our purposes. After, though... 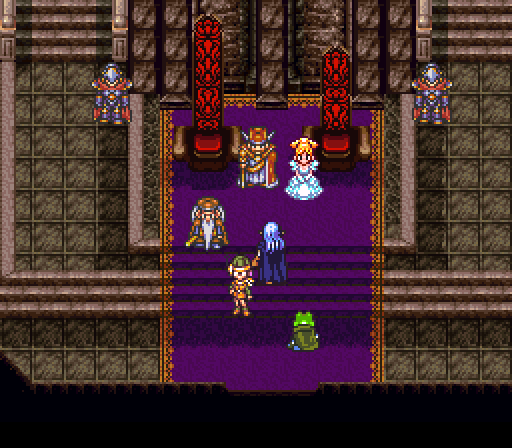 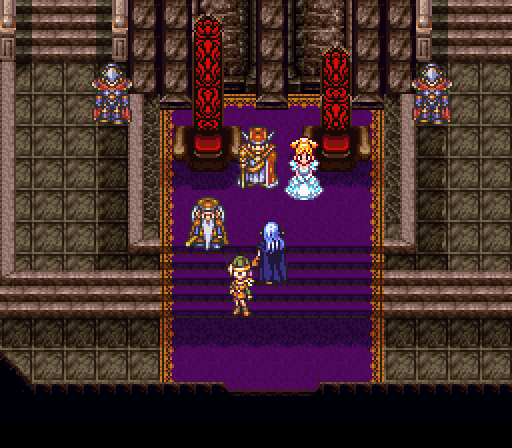 For some reason, after Frog leaves the party, the game will softlock unless you specifically have Crono in your party. He doesn't even need to be in the lead, he simply has to be there.

Now for what I consider the highlight of this update.

Sometimes these glitches do a damn good job speaking for themselves.

Both of these glitches are things we've seen earlier in this update. The former is Marle teleporting where the game tells her to be, the latter is Marle vanishing once the cutscene is over, only allowing you to move up until you...can't. 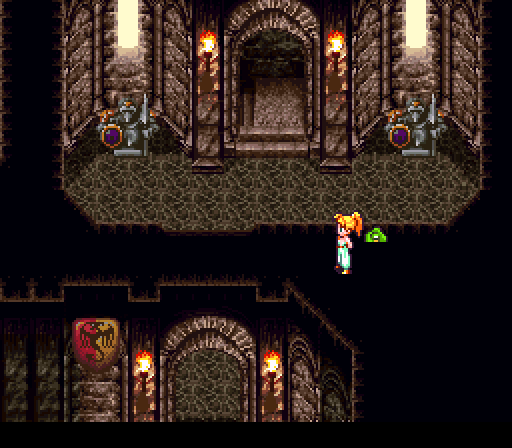 Of course, it becomes a lot more amusing if you add some other party members along for the ride. Marle still ends up stuck in the room geometry though and you once again softlock. 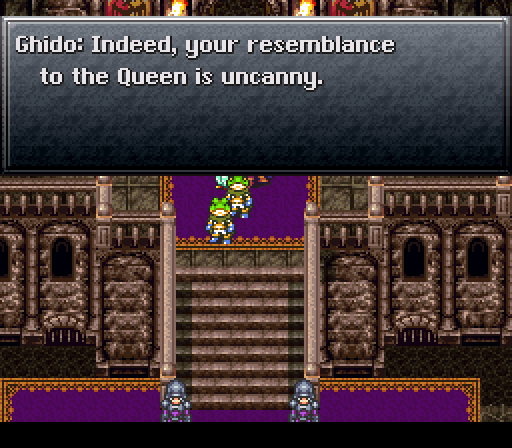 The game softlocks after Frog leaves unless Lucca is there to say her line.

Also, when you go back to the gate up on the northeastern mountain, you'll need to trigger the "Bring back Marle" cutscene if you have Marle in your party, otherwise this will happen: 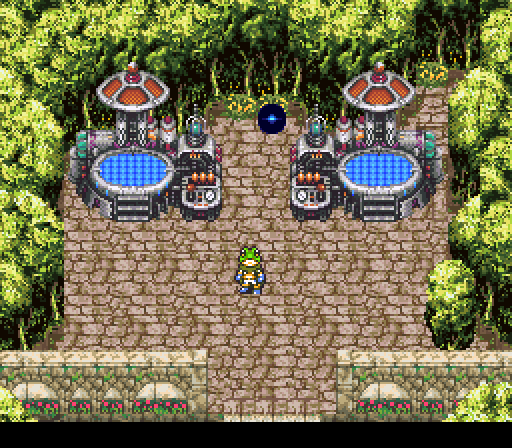 Anyway, Frog's ashamed after his failures and decides to go to the future and abandon his new friends to the past. It's OK, though, because I have a feeling we'll be seeing them again soon (of course, we skip all the cutscenes without Marle or Lucca there).

Next time, the Trial of the Centuries!