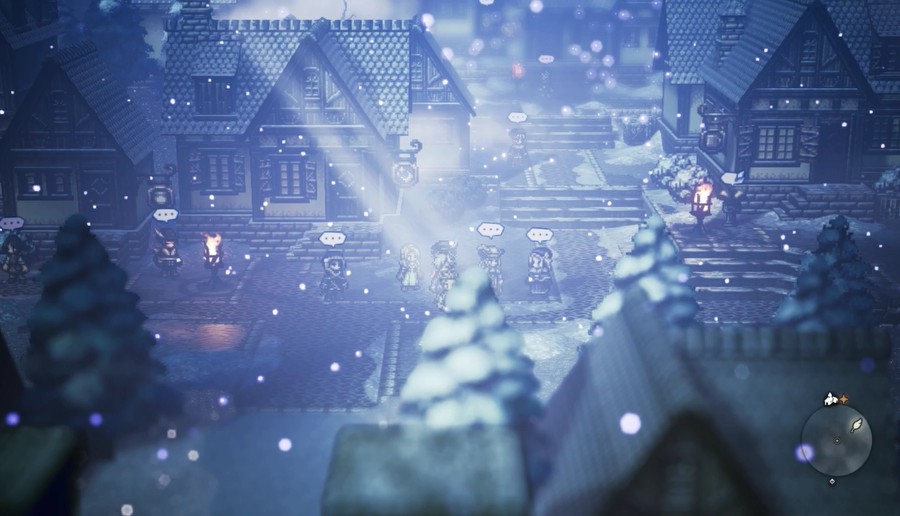 This town update is much shorter than the other two. First, there's not as many familiar faces here as there are in the earlier towns, which probably explains also why there's fewer post-game side stories in these late-game towns. Second, there's not much to revisit because since these towns already pop up in late-game, I've already been able to shown off nearly everything in these towns, while in earlier towns I was hindered by level or money. Due to this, I'm only showing off three of the towns here, since there's nothing of note in Wispermill, Everhold, Riverford, Orewell, or Duskbarrow besides some side stories I'll show off later.

For now, let's start in Frostreach. 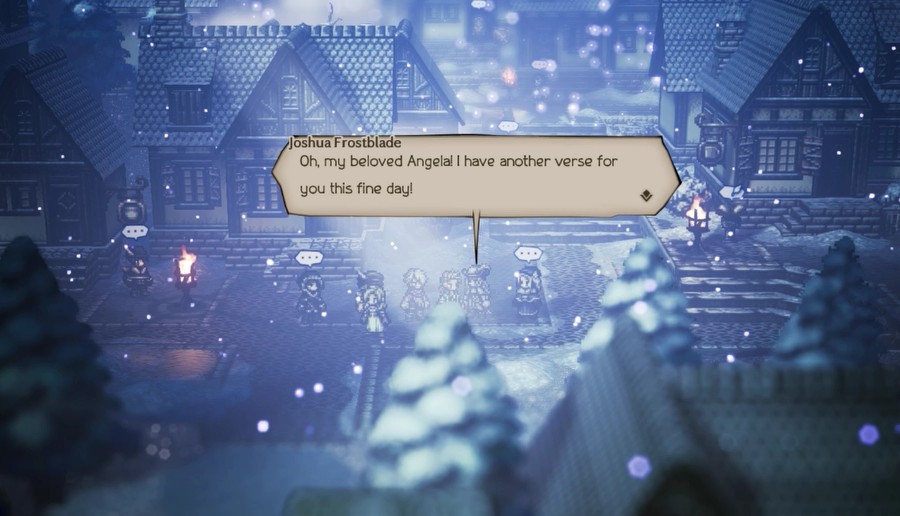 Joshua, our first opponent in the tournament in Olberic's Chapter 2, is here. Thus we already have his Inquire info from back then. 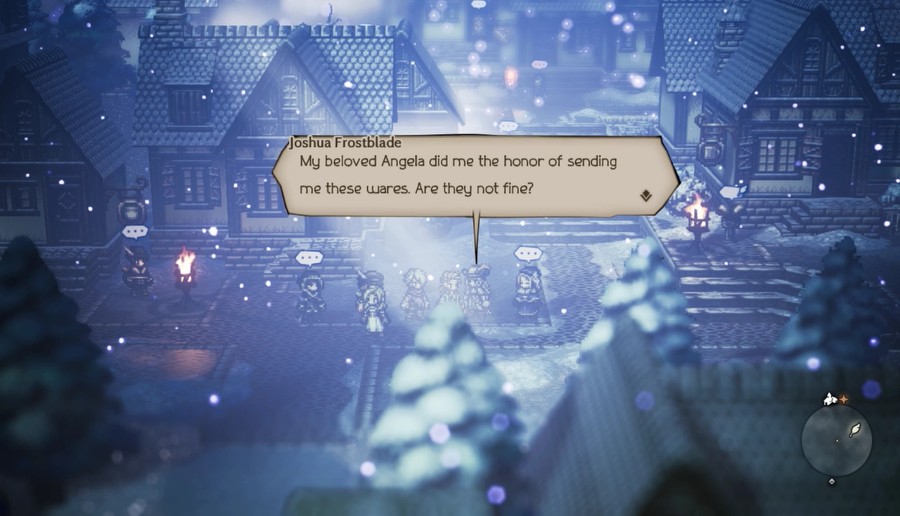 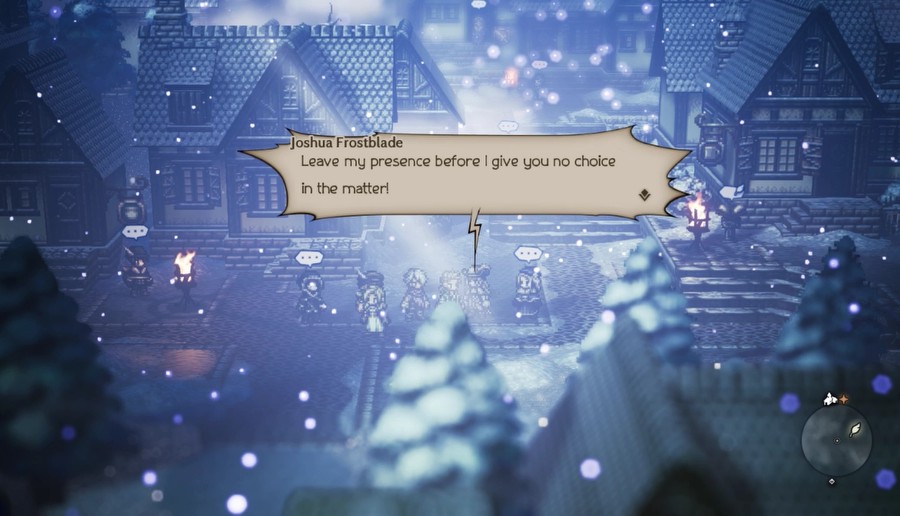 He has a couple late-game pieces of equipment, nothing worth showing off but enough to warrant me trying to steal them. 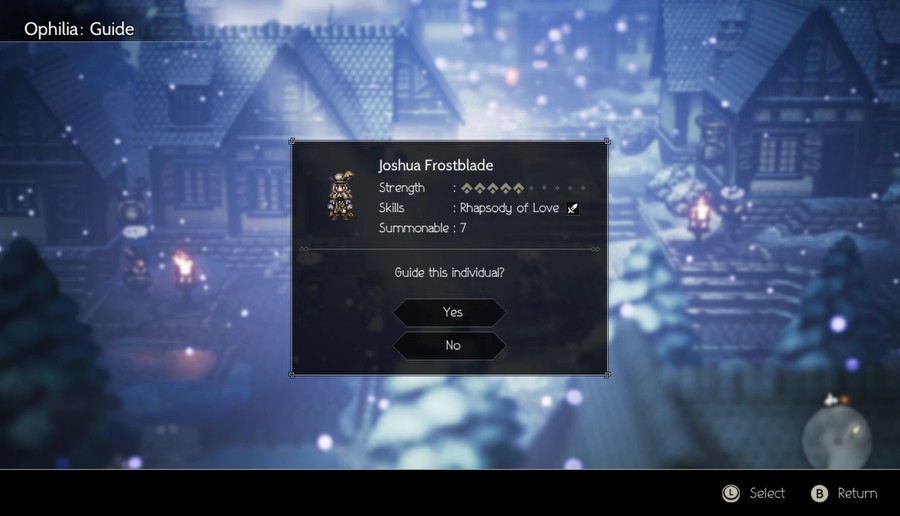 He also has an appropriate attack skill that can also inflict confusion on a foe, which... I can kind of understand that. 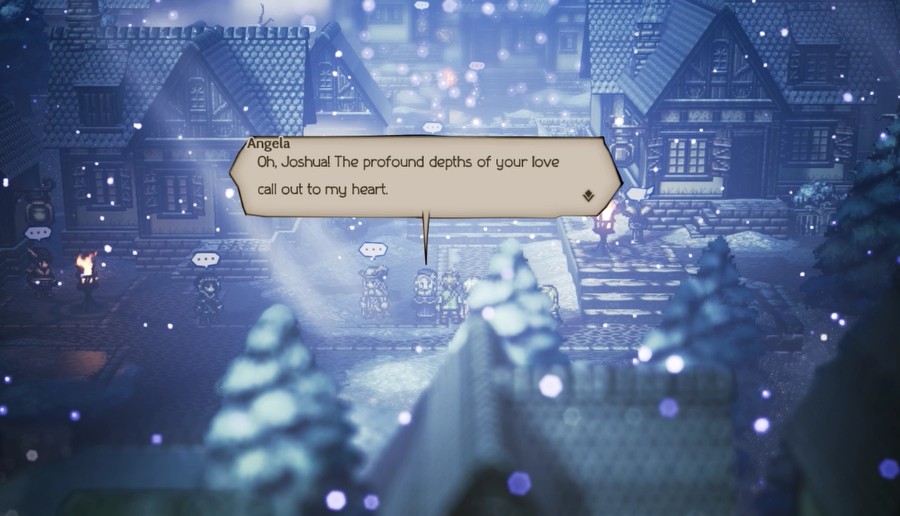 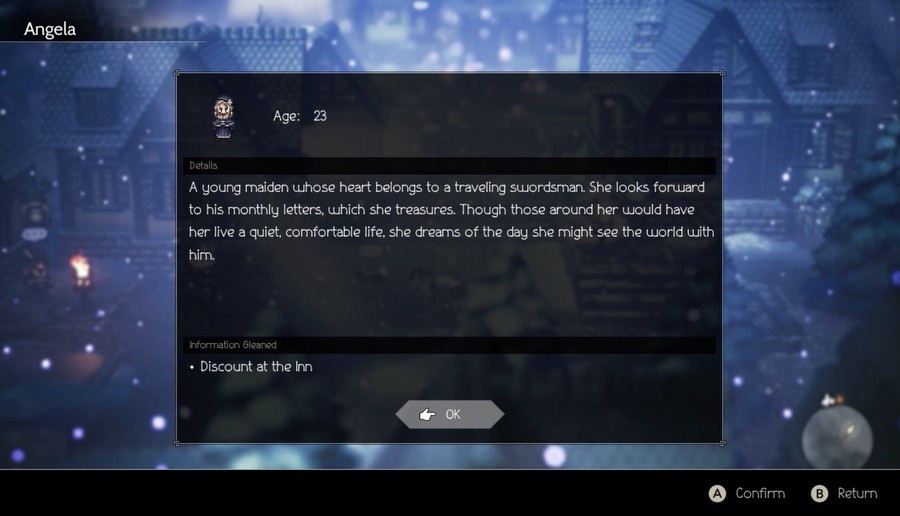 If nothing else, Joshua has clearly met his soul mate. She embraces his sappiness and is just as absorbed by him as he is by her. They are both huge romantics that really embrace the over-the-top theatrics that being star-crossed lovers implies. Which, good for them! 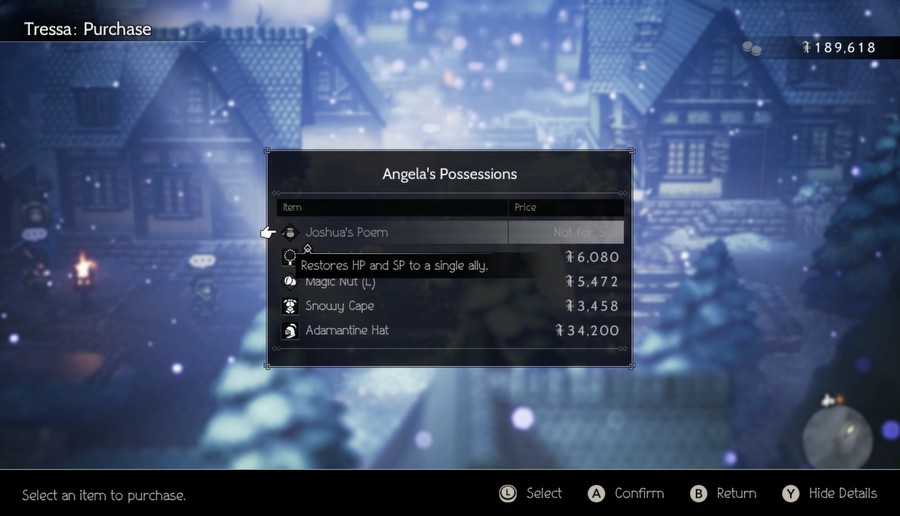 Interestingly, you can only steal Joshua's Poem, which is just a simple restorative. 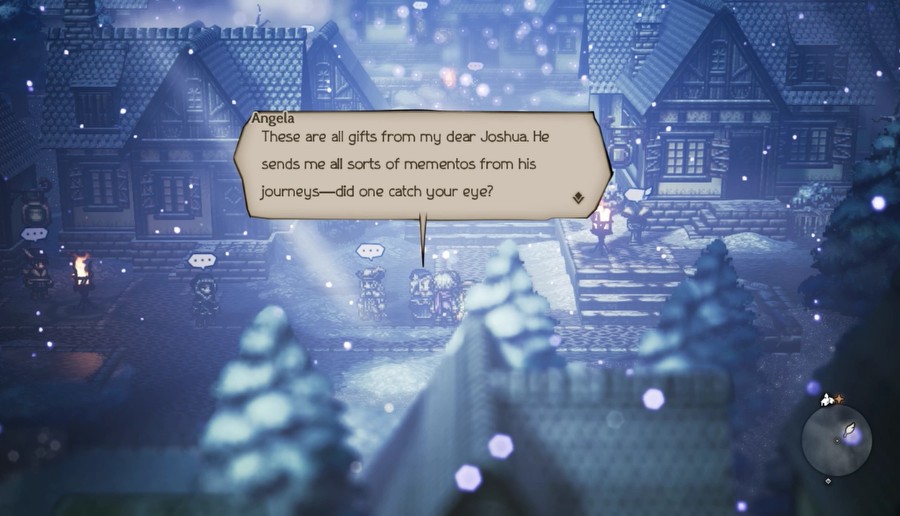 And of course, their inventories consist of items sent to them by the other. 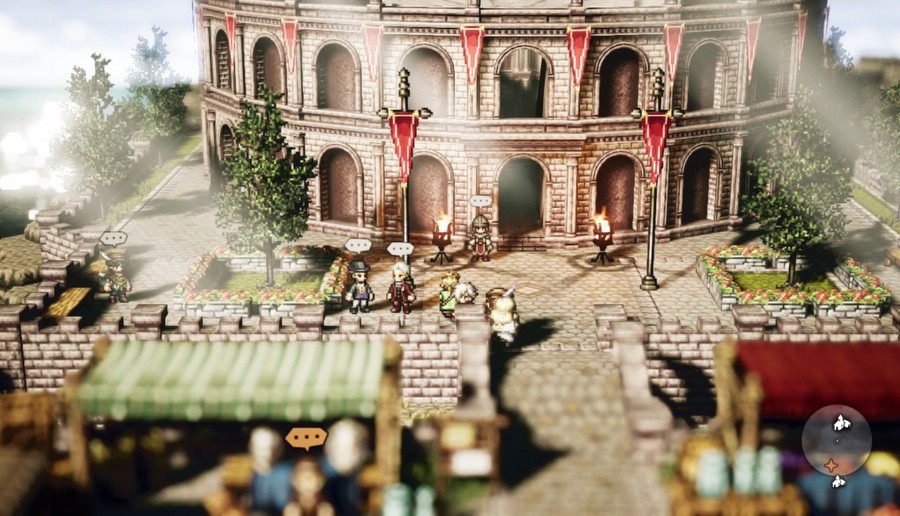 Skipping to Grandport, I could've covered these two when I did the town update, but I figured it'd be nice to get all the story NPCs all in one update like this one, so here they are! 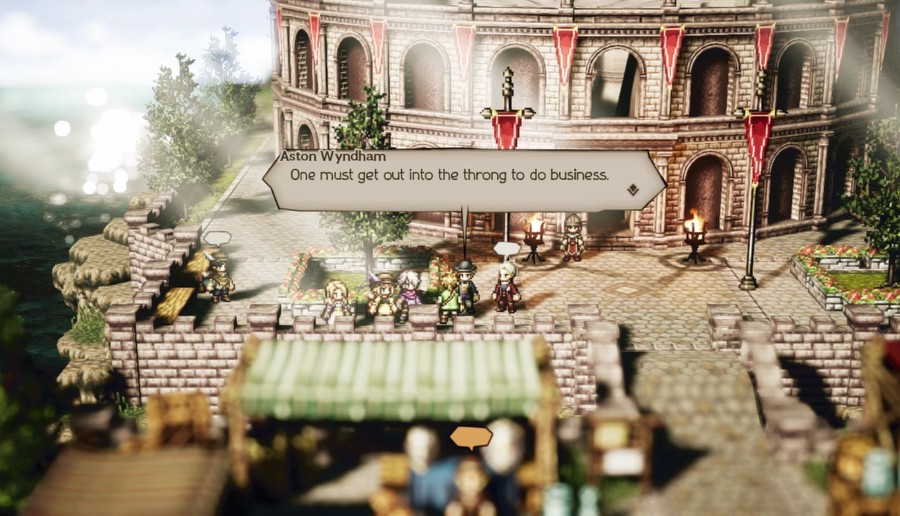 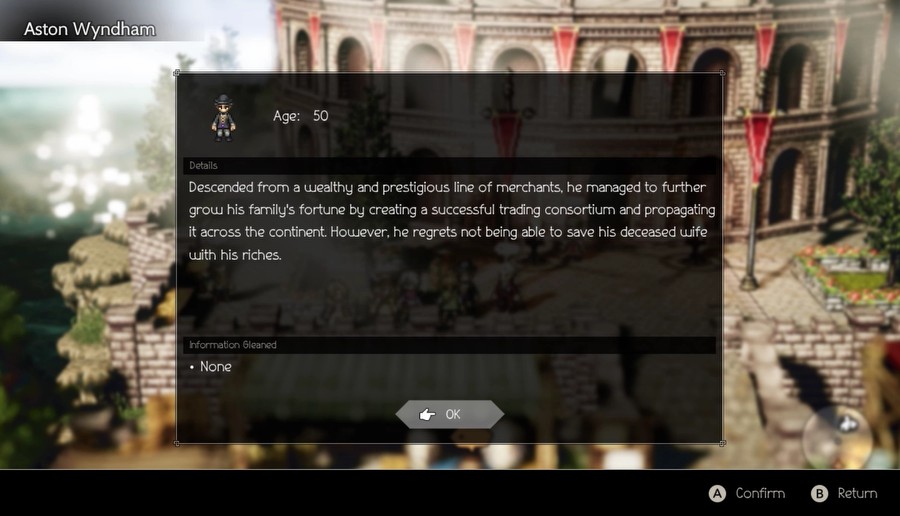 Aston is a case of someone who inherited wealth but actually used that to expand it to astronomical reaches, which probably explains why he's able to offer a billion leaves to whoever holds a gift to make his daughter happy.

Likewise, his dying wife is also likely why he spares no expense to try to bring as much happiness as he can to his sickly daughter. 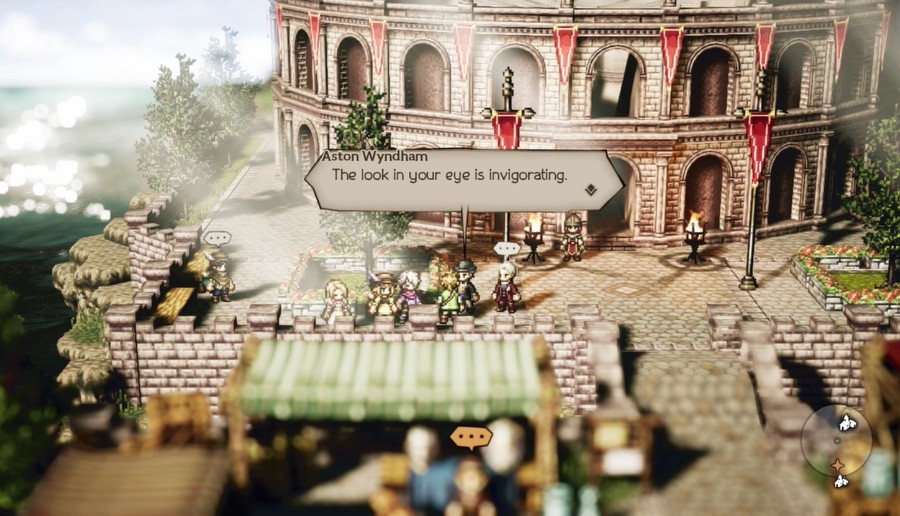 And of course, there's acknowledgment of Tressa's mercentile prowess. 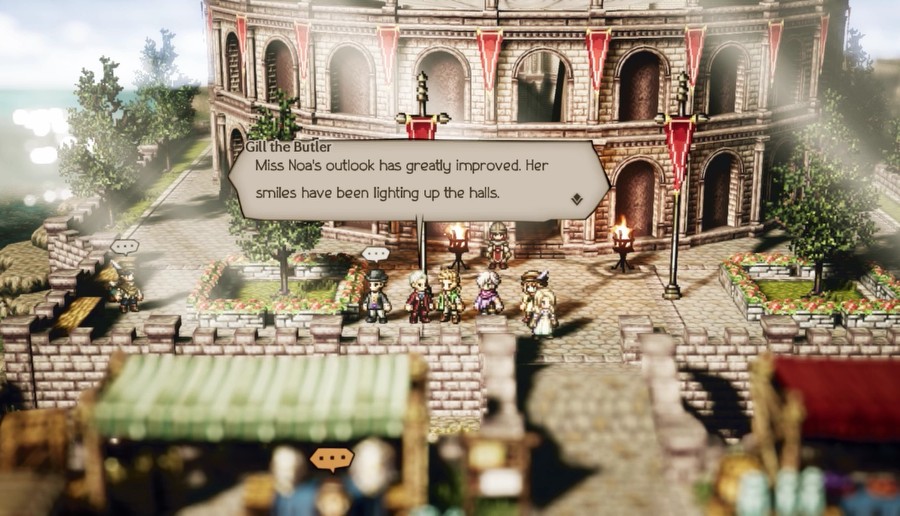 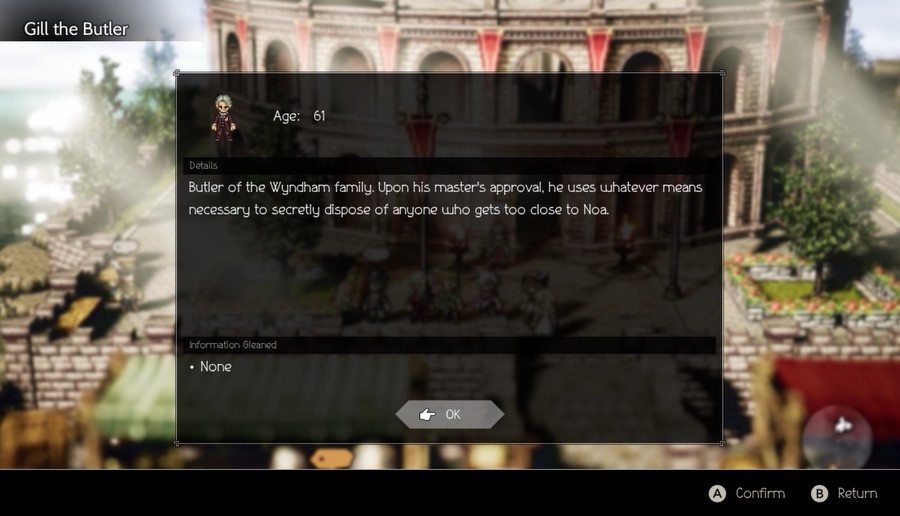 Of course, the Wyndhams aren't entirely on the up-and-up. 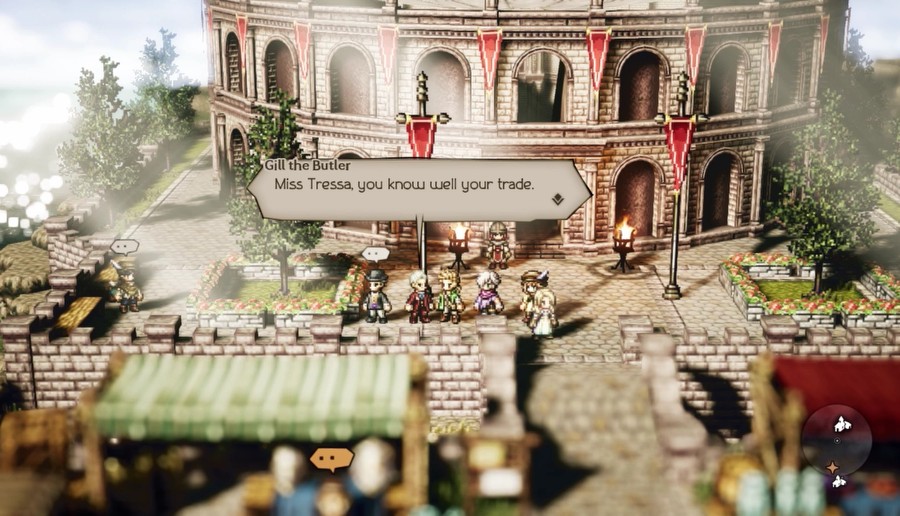 So it's fortunate he's so cordial with Tressa. 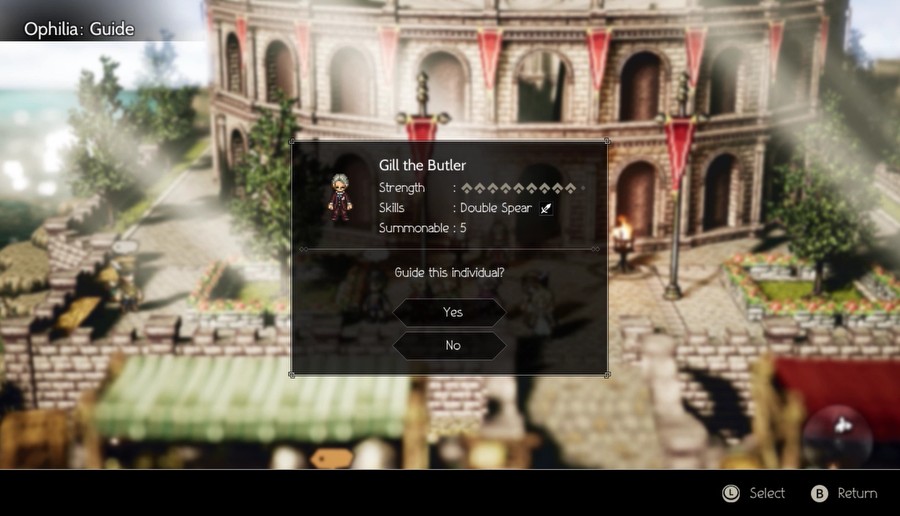 Very much so. Now I wonder if there really is some secret butler training out there where you learn to be a complete butler badass... 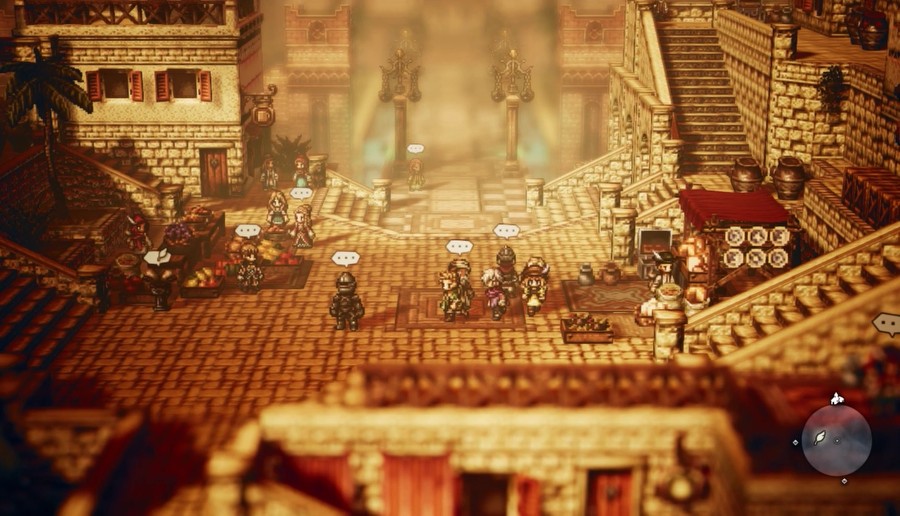 Over to Marsalim, where we have several more characters as we finish off this update. 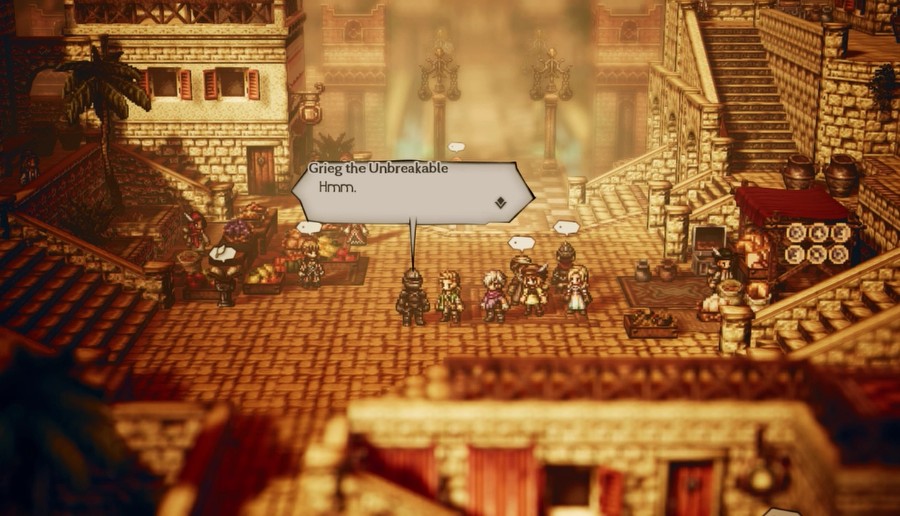 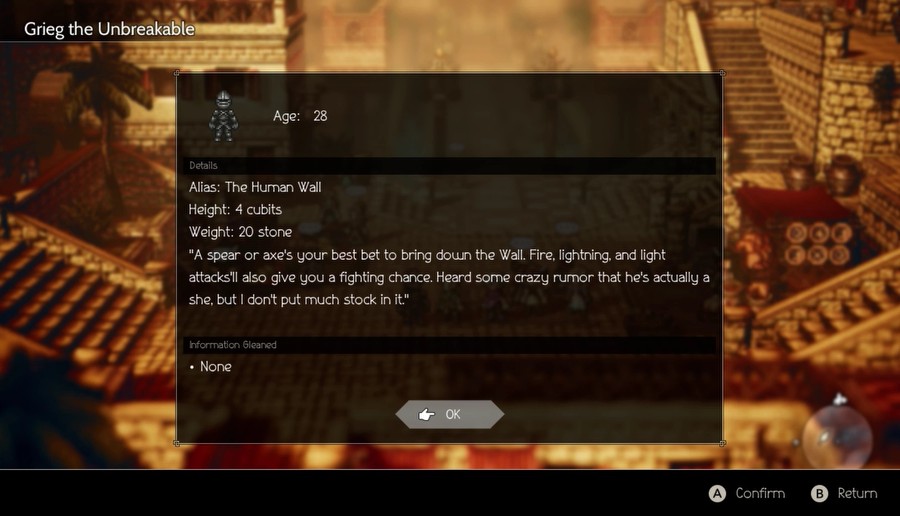 The first is the final of the combatants of the tournament back in Olberic's Chapter 2. It is kind of surprising that there were no shown woman combatants there. The game's a bit weird with representation, in that overall it tries to show men and women as equals, yet every single guard and the vast majority of merchants are male, even though you'd have women in the Knights Ardante and quite a few examples of competent women in power in a variety of roles. It's not really something notice unless you're really paying attention or, in my case, the one who ripped every NPC sprite and saw the patterns that arose from that. I just hope the next Octopath game has a lot more female guards and merchants so it really does feel more integrated. 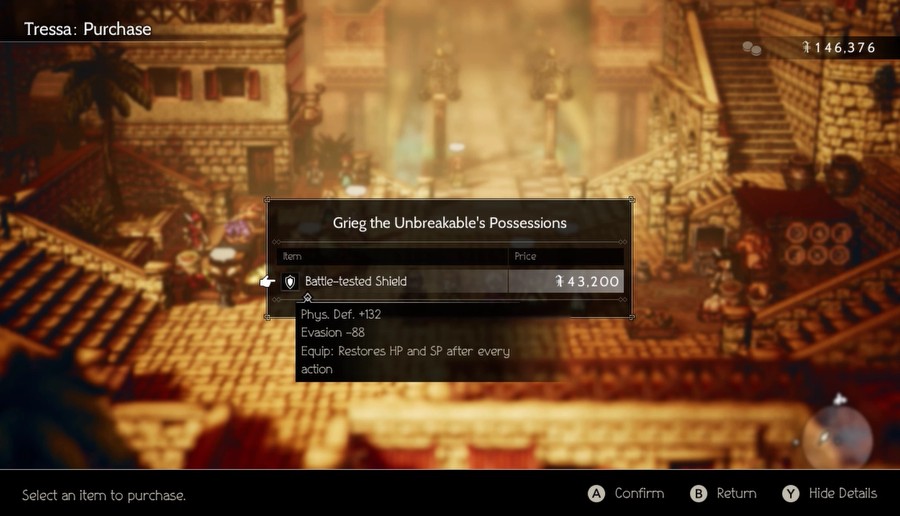 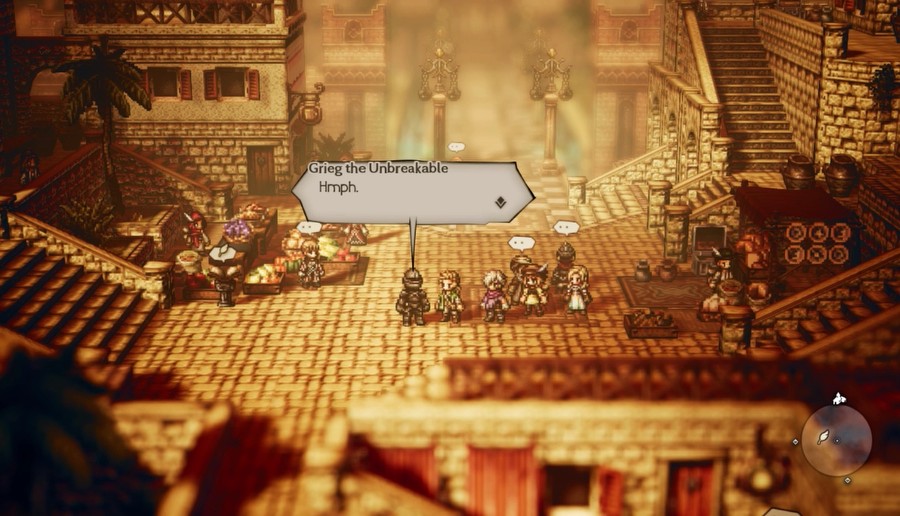 Grieg does have the last of the Battle-tested items, and the only one of those that's actually armor, the Battle-tested Shield. The HP/SP regen is kinda nice, and it does have the highest PhysDef of any shield, but I don't like it due to the lack of ElemDef and the Evasion penalty. Give me either ElemDef or an Evasion boost and I would love this shield, but as is, eh. 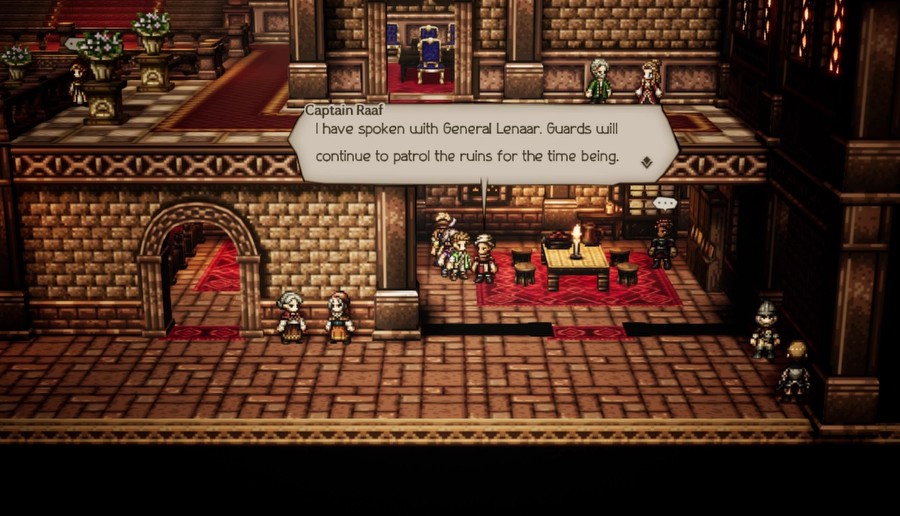 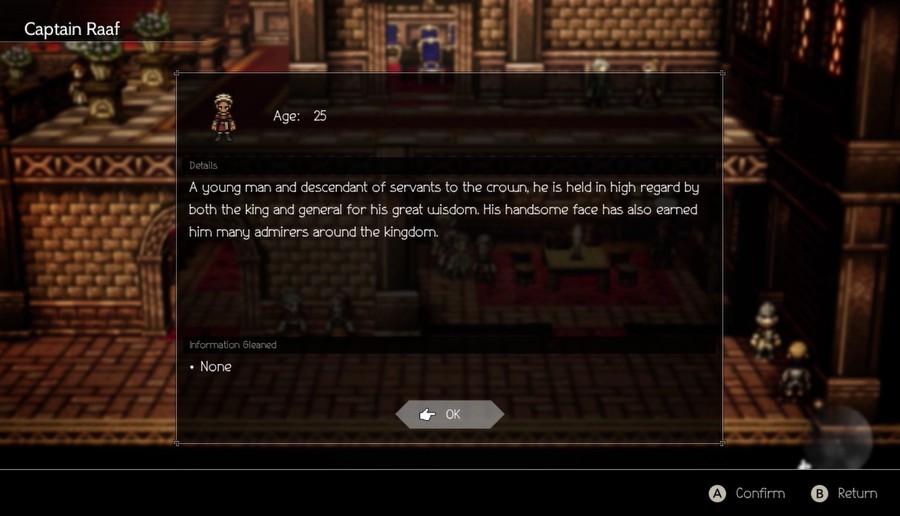 Wise, courageous, and handsome? If you ask me, this guy seems like Primrose's ideal man. 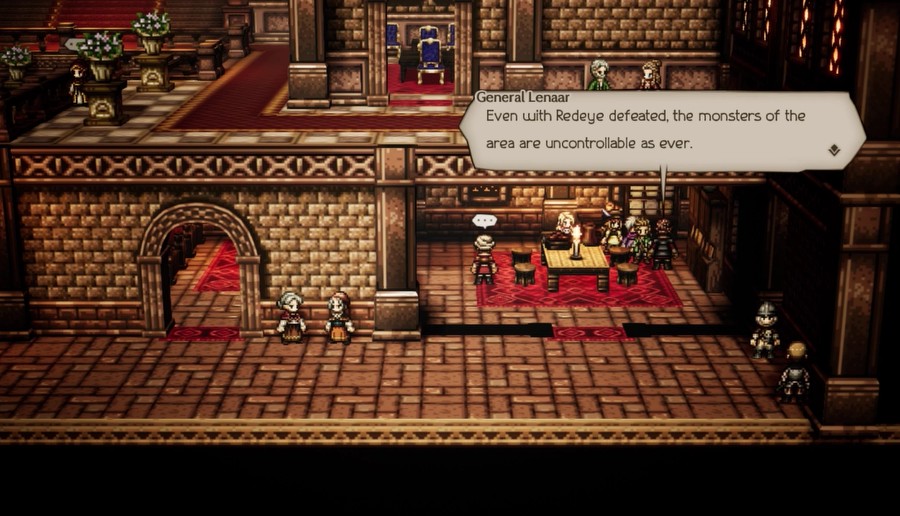 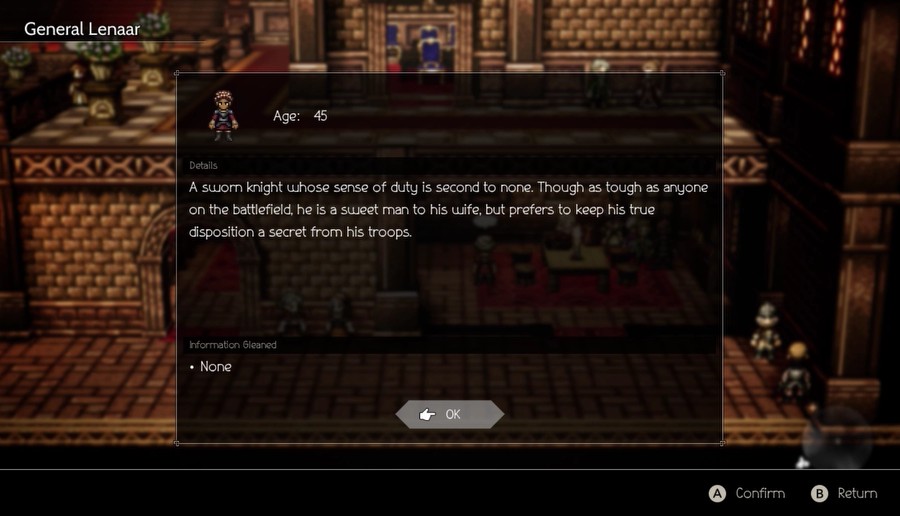 We already know Lenaar is a badass willing to do what's right even if it costs him his life. It's nice to know he loves his wife on top of all that, too. 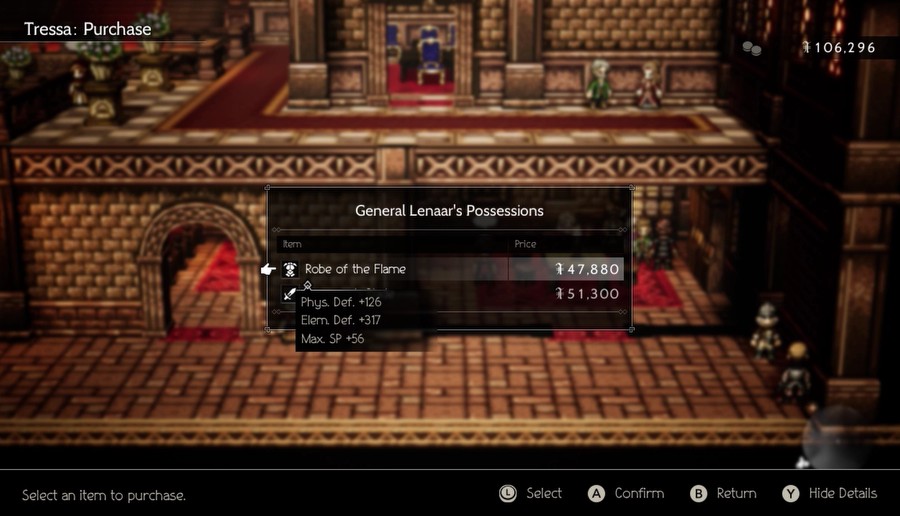 And even better, he has a second Robe of the Flame, and that more than anything makes me really appreciate the man.

Next time, we celebrate two hundred freaking updates by fulfilling a side story from a man we've seen for all of two minutes.