048. The Whistlewood and Path of Beasts 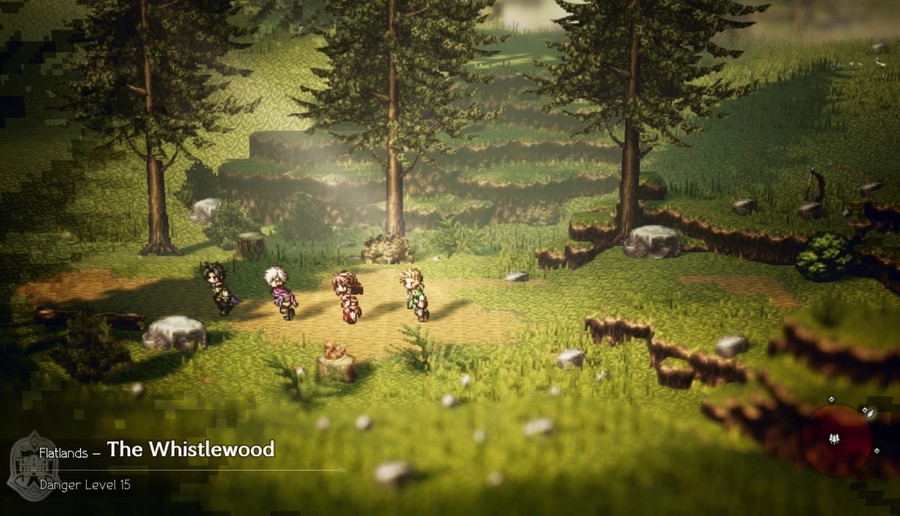 Today we're going to knock out a couple of the optional side dungeons. No real reason to go to them other than because we can, but that's reason enough!

Music: The Trees Have Eyes 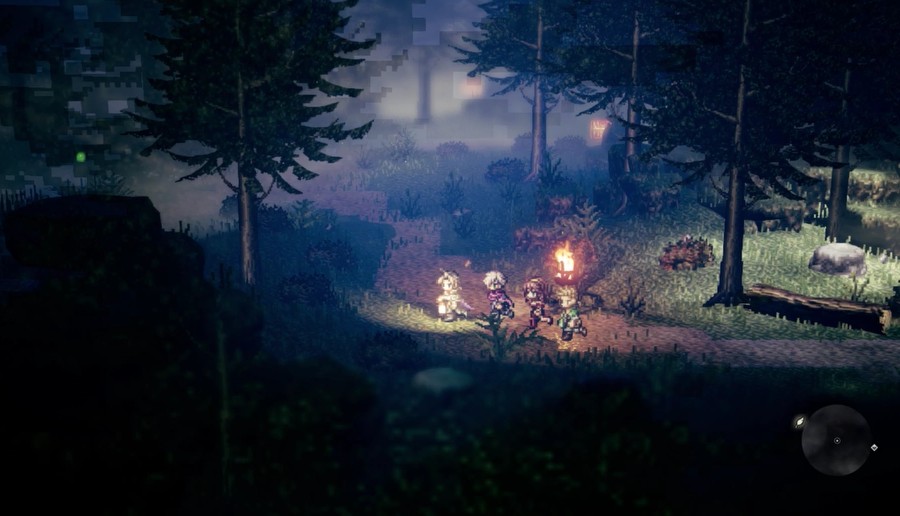 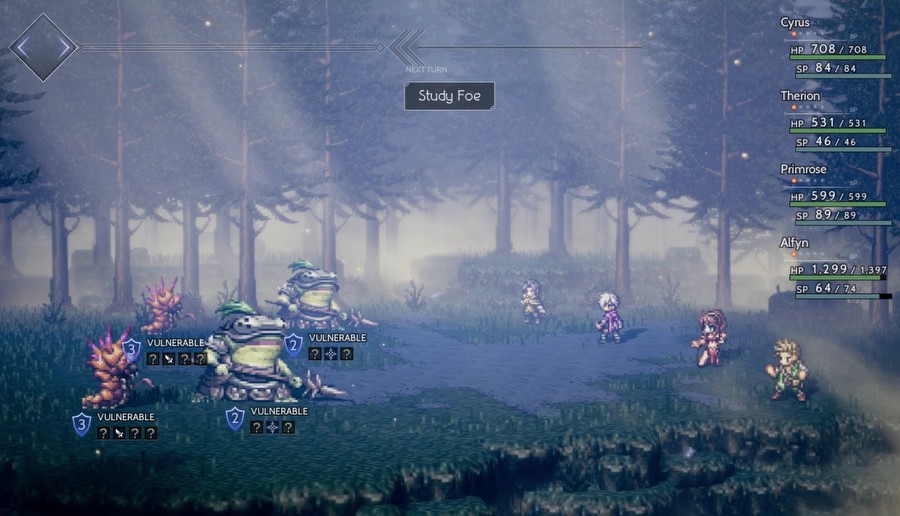 The primary enemies are Spud Bugs, Howlers, and varieties of Froggen. These guys are Froggen IV. 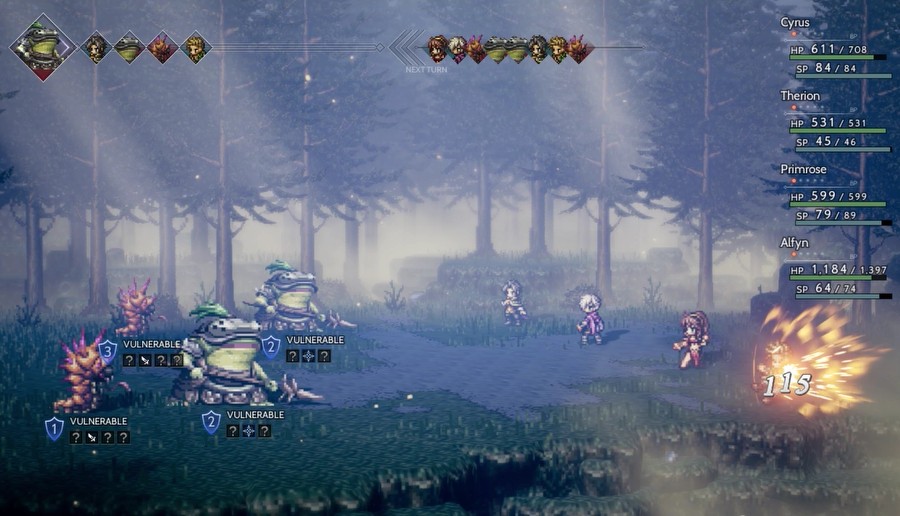 These foes hit pretty hard, but not dangerously so. You could mostly do this area without Ophilia or Alfyn, as painful as it may be at times, though there's apparently a tier-VI Froggen that can wreck your day. 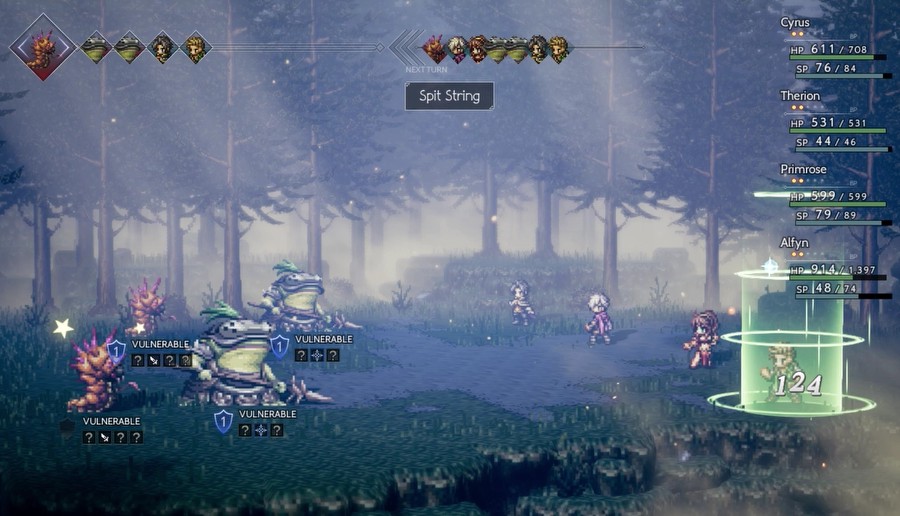 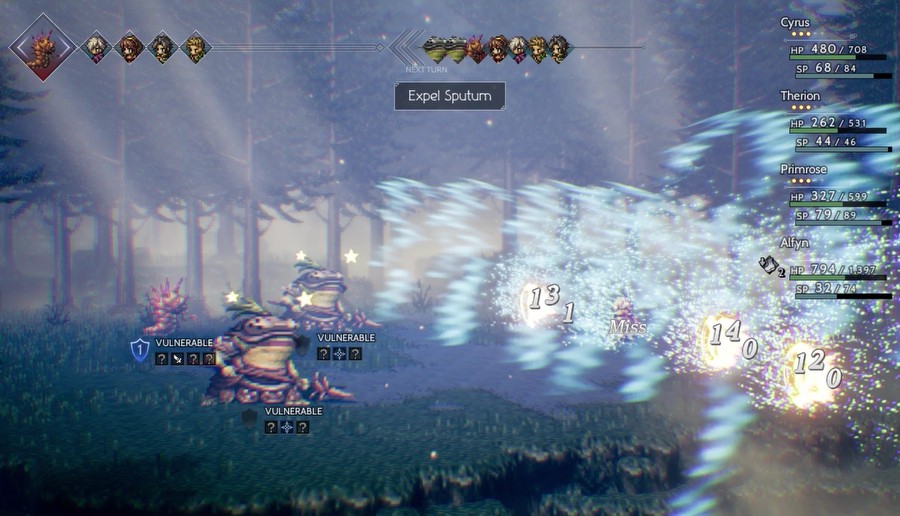 The Spud Bugs are nastier than they look, with a party-wide attack and a special attack that also reduces Speed. 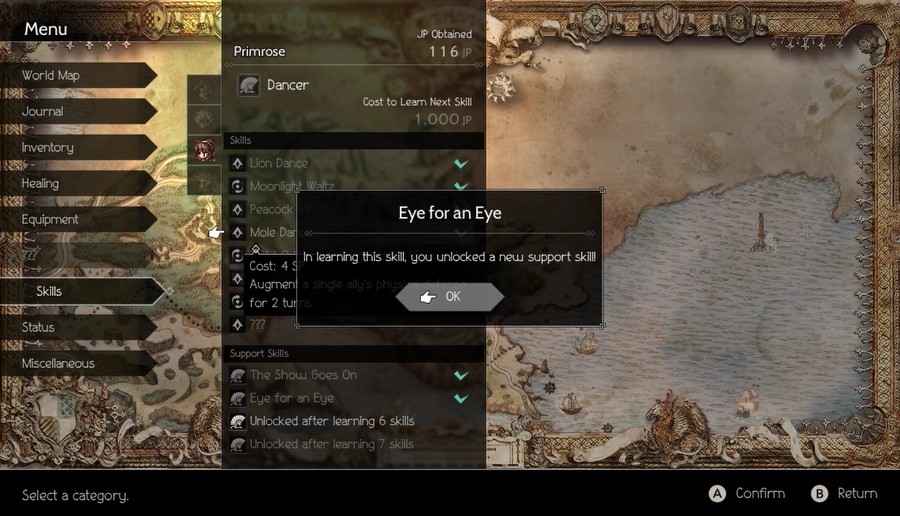 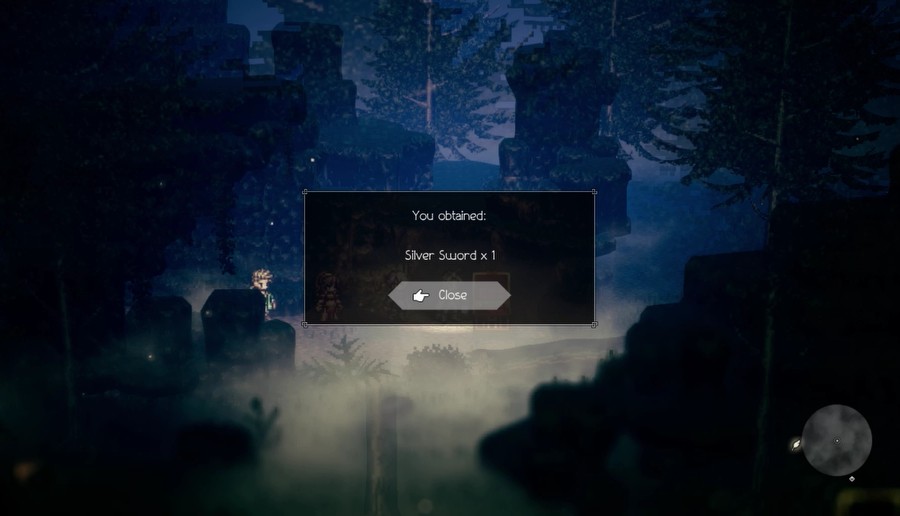 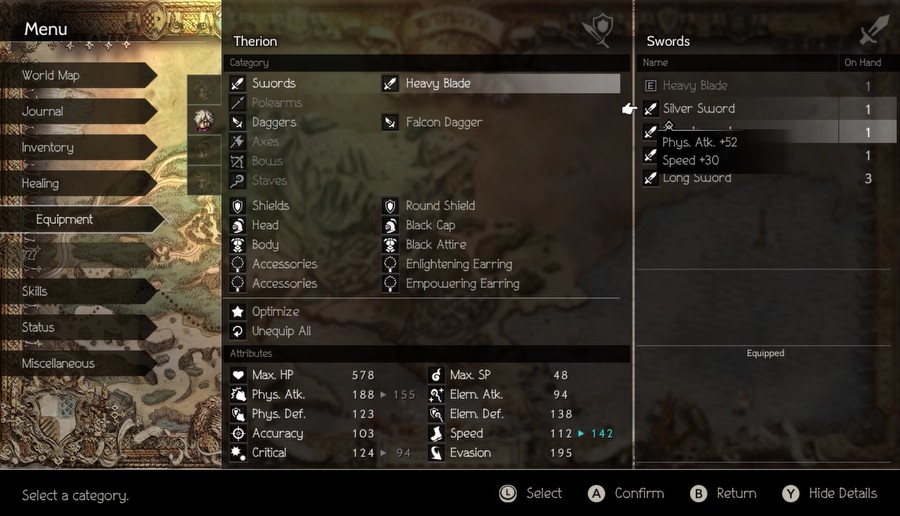 Not as strong as the Heavy Blade I have, but it'll work if I ever have Olberic and Therion together on a team. 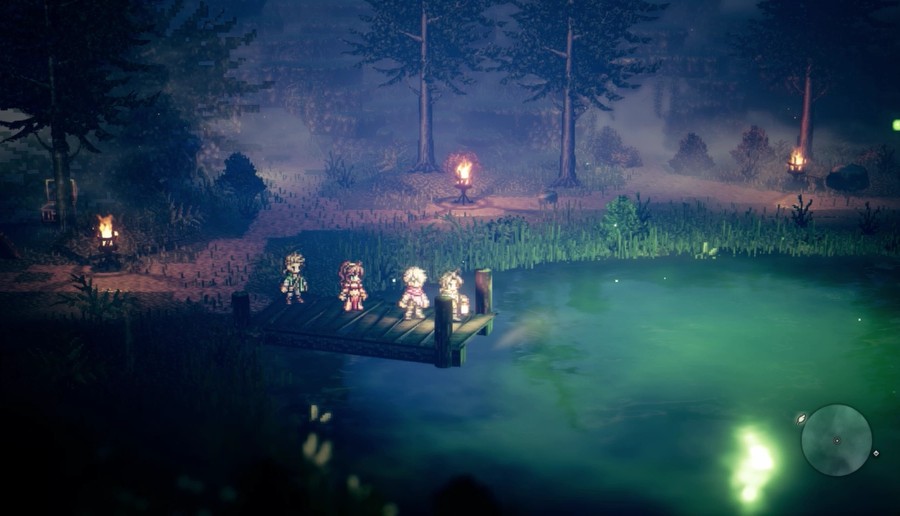 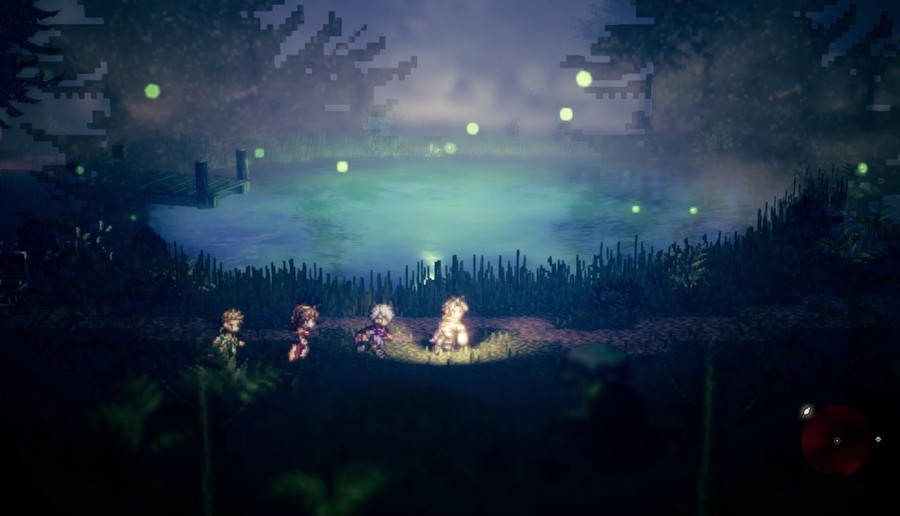 The pond is meaningless gameplay-wise but it's very pretty and probably the only good reason to even come here. 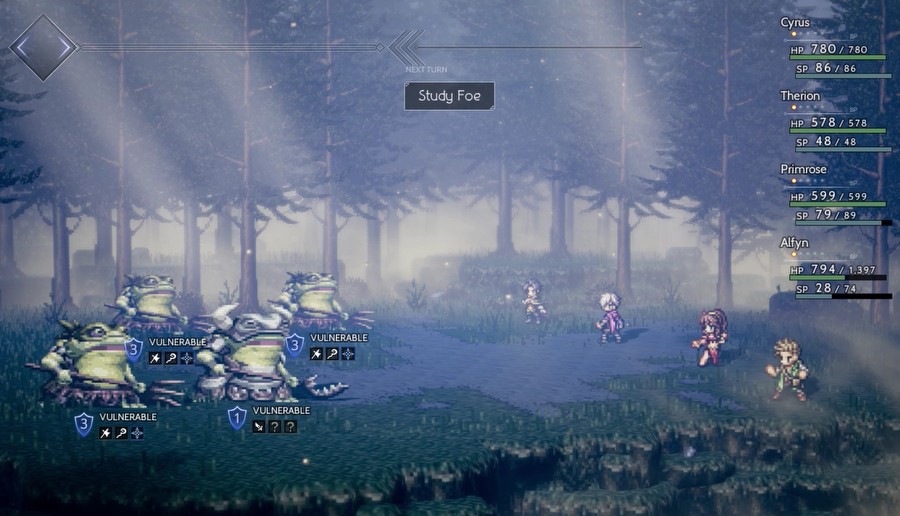 Some Froggen III's with a Froggen V on the bottom-right. Weirdly, it only has one shield despite being a higher tier. 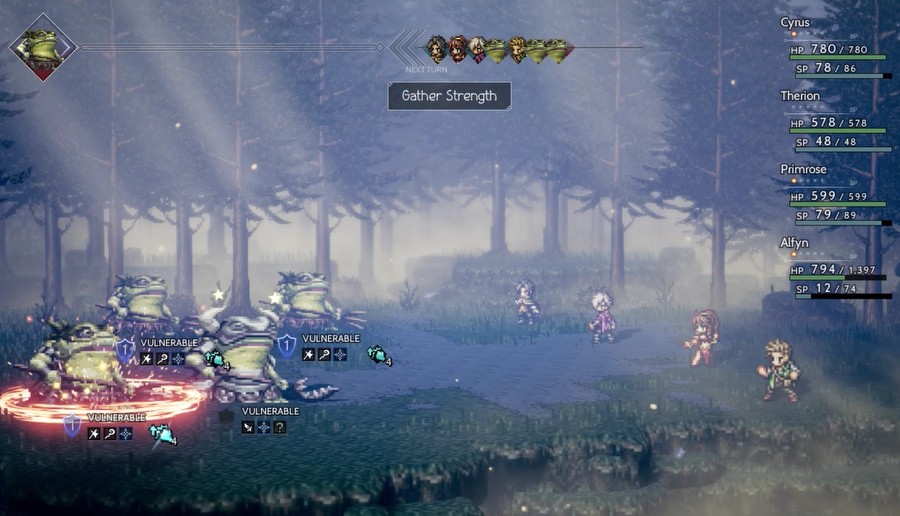 The lower-tier ones start their turns by buffing their physical attacks. 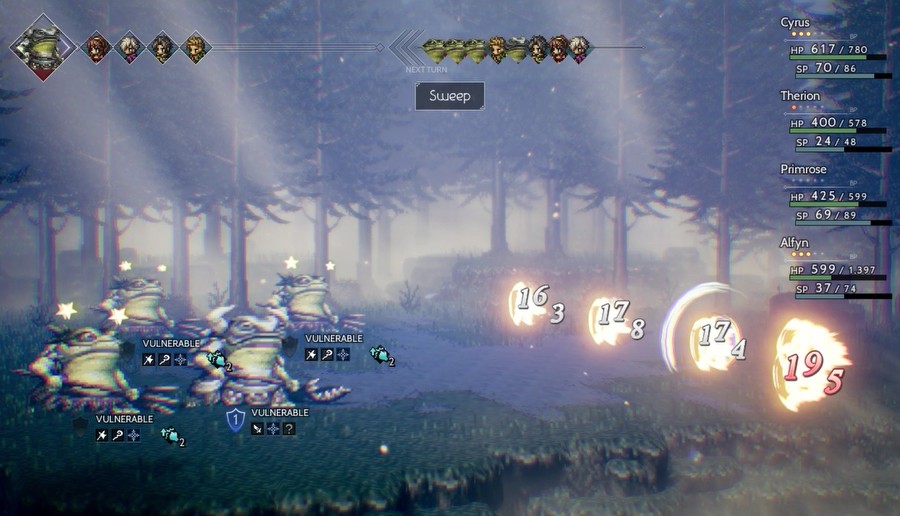 And here's why the Froggen V is a V. It does not mess around. 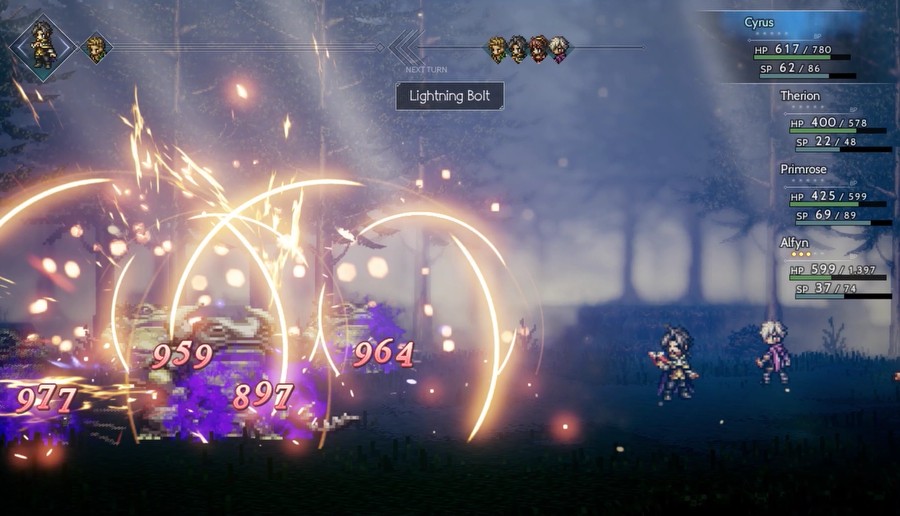 But then neither do I. 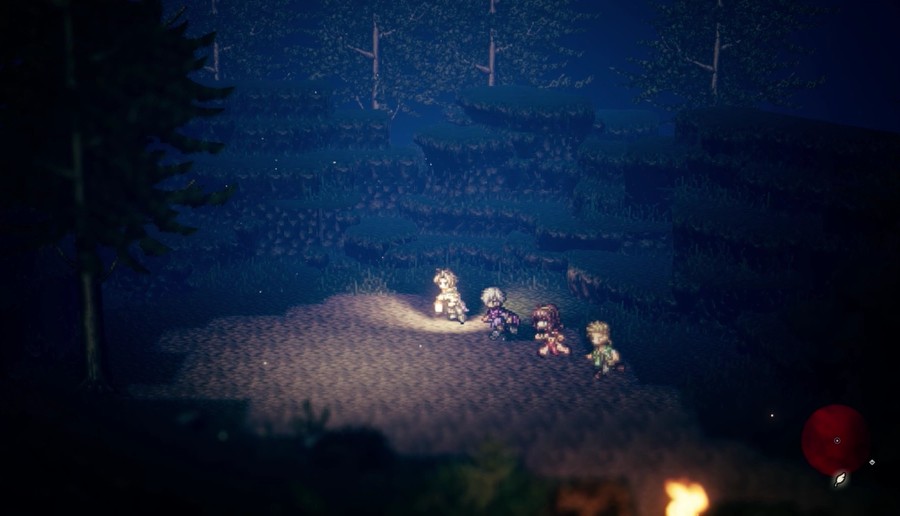 This seems like an area where a boss should be, but it's not. There's no boss here. In fact, we've seen everything there is to see in this place. There's only five treasure chests, none of them particularly interesting. 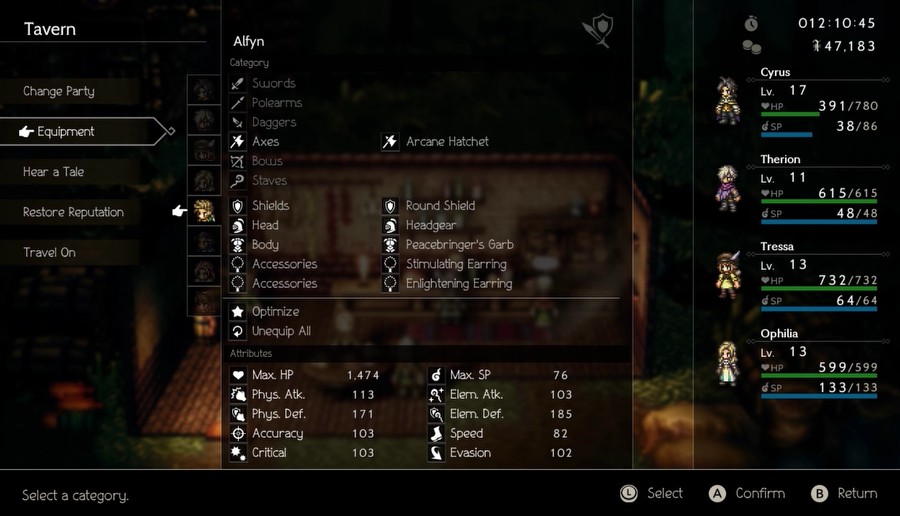 Since it was so short, let's do another one! I'm trying to keep levels even, so I rotate my party a bit. 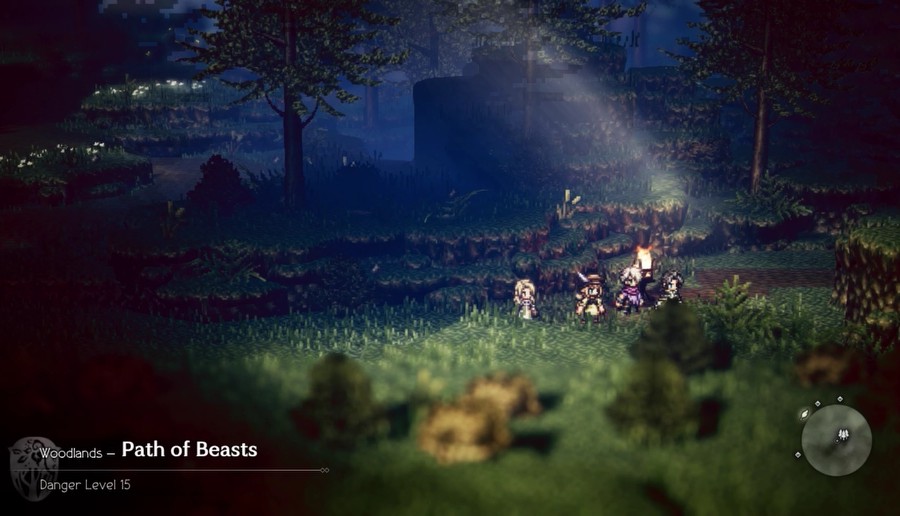 Music: The Trees Have Eyes 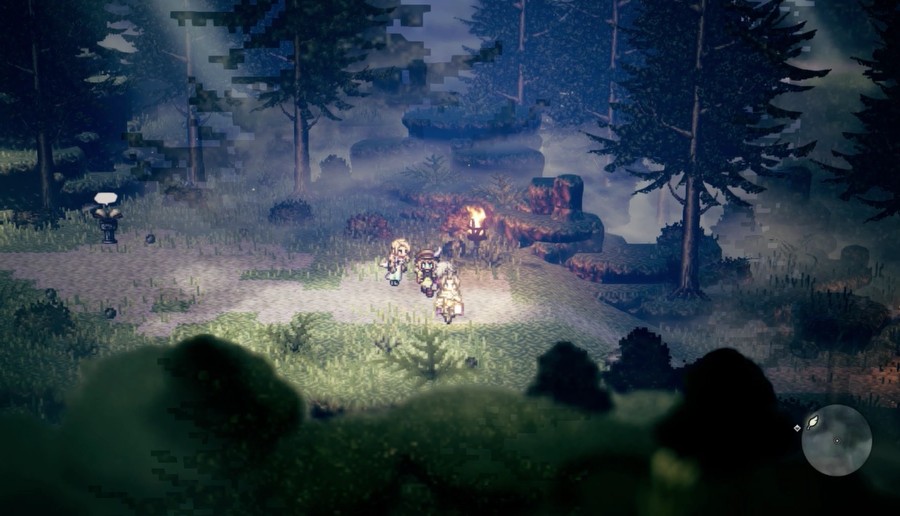 This is another forest. It's caves, forests, and manors all the way down, with the occasional catacomb or sewer. 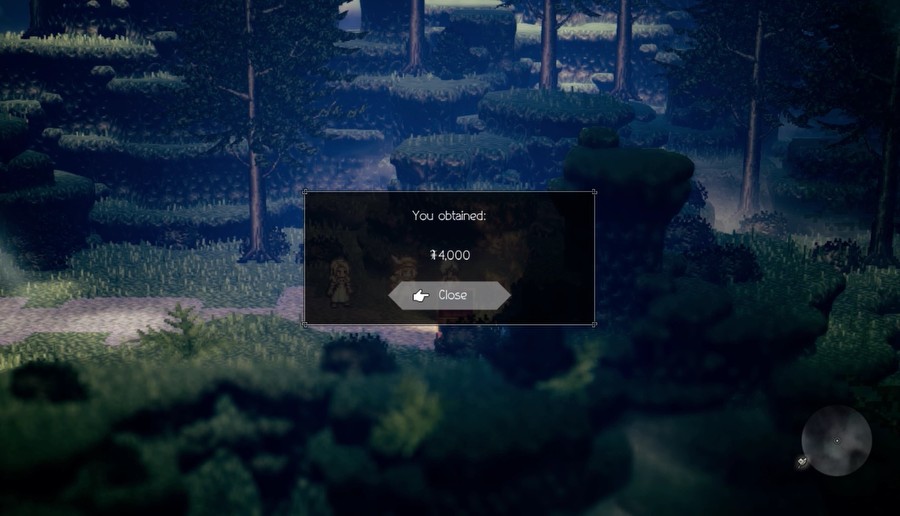 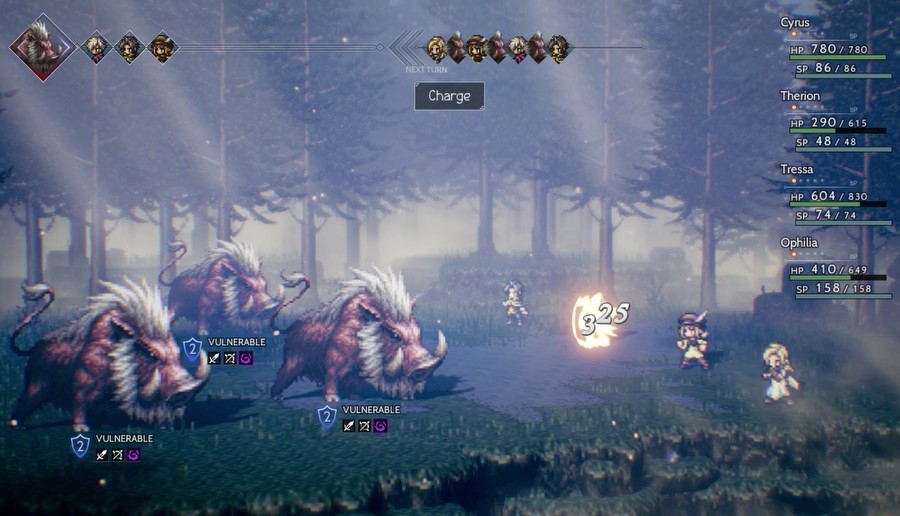 The enemies are all ones we've seen before, though this encounter with three Giant Boars is...slightly unpleasant. 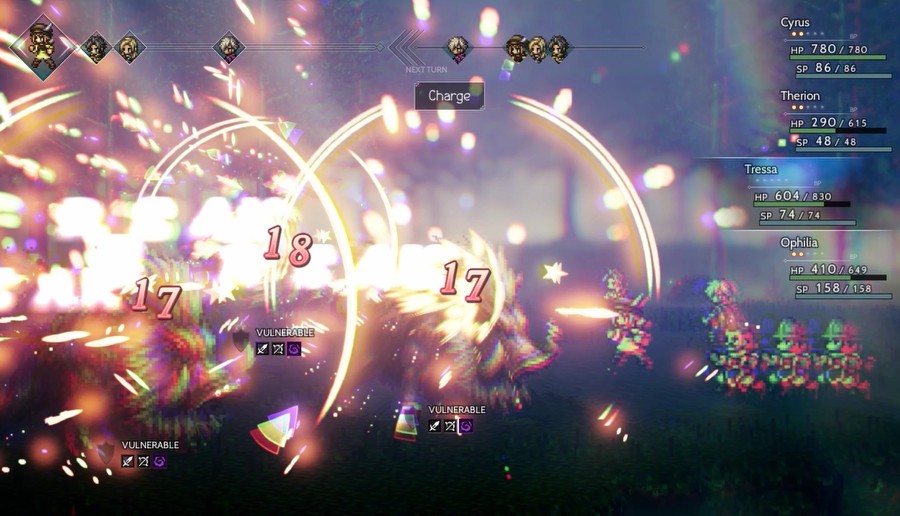 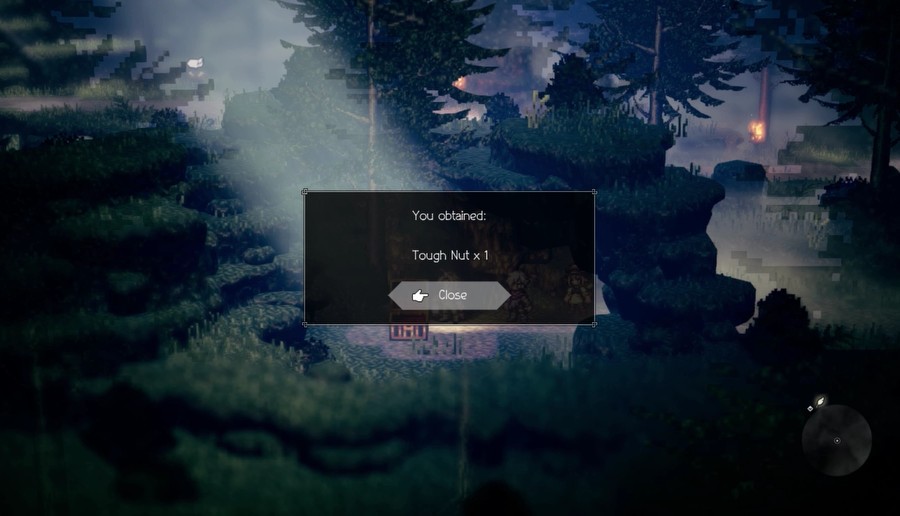 If nothing else, there's usually a nut in these dungeons. 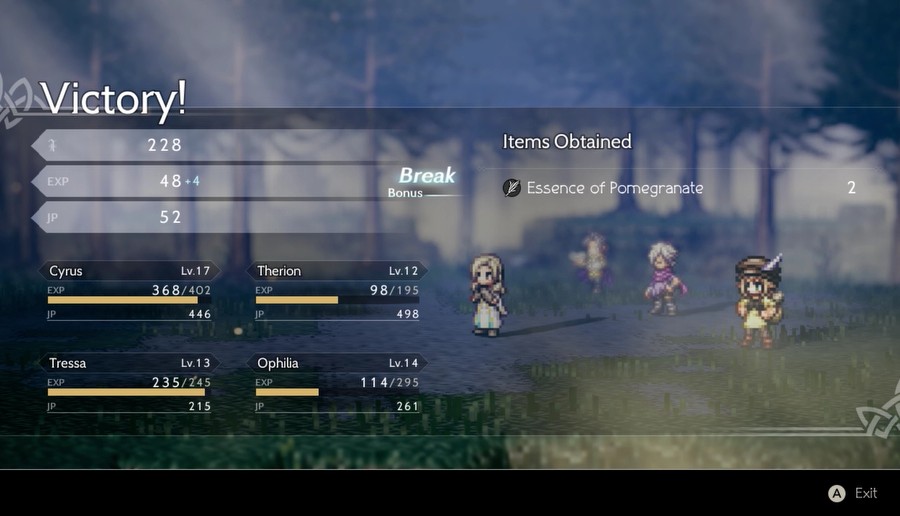 Essence of Pomegranate is a common drop/steal, which is great because we'll be using this stuff a lot in the end and post-game. 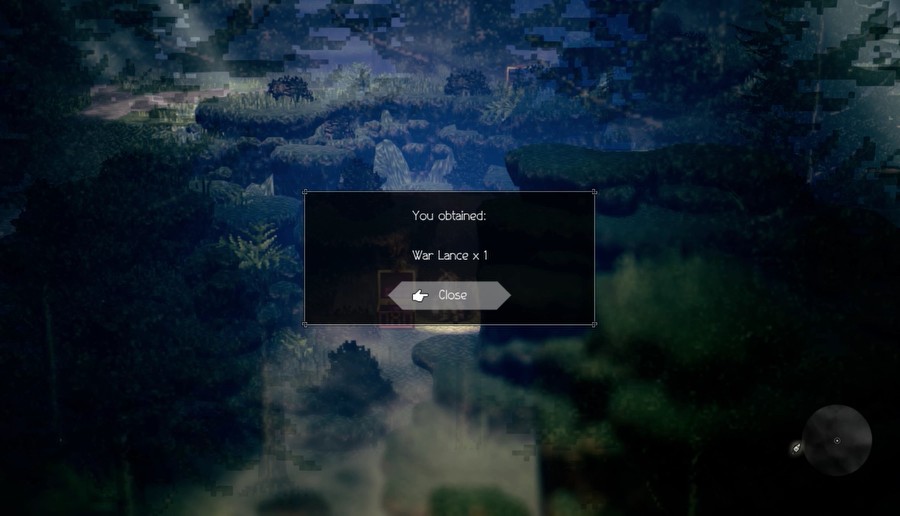 The purple chest item. We already have one, but a duplicate is nice for parties with both Olberic and Tressa. 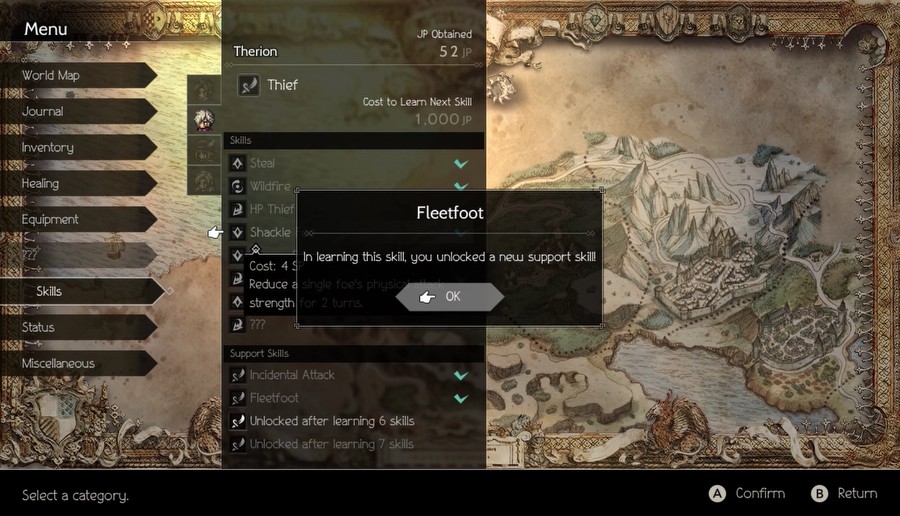 Therion finally gets his fifth skill. Shackle Foe to reduce PhysAtk is the obvious pick of those remaining. 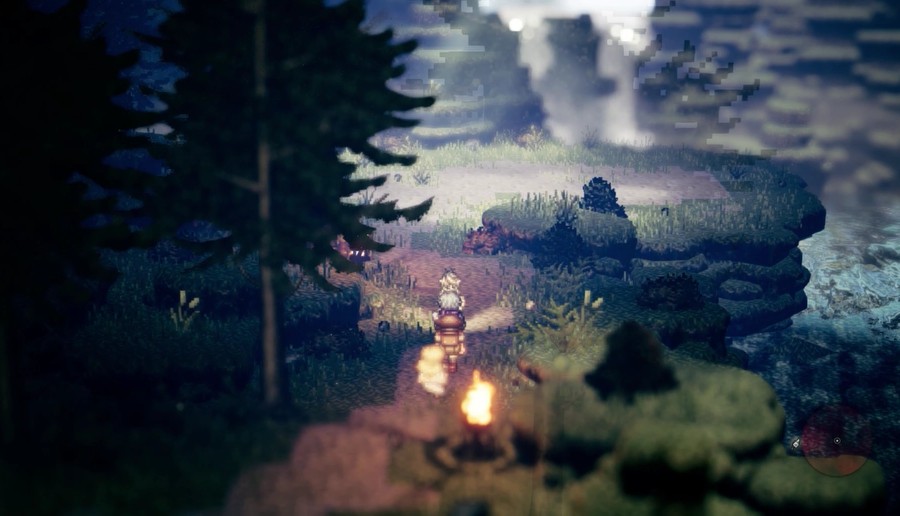 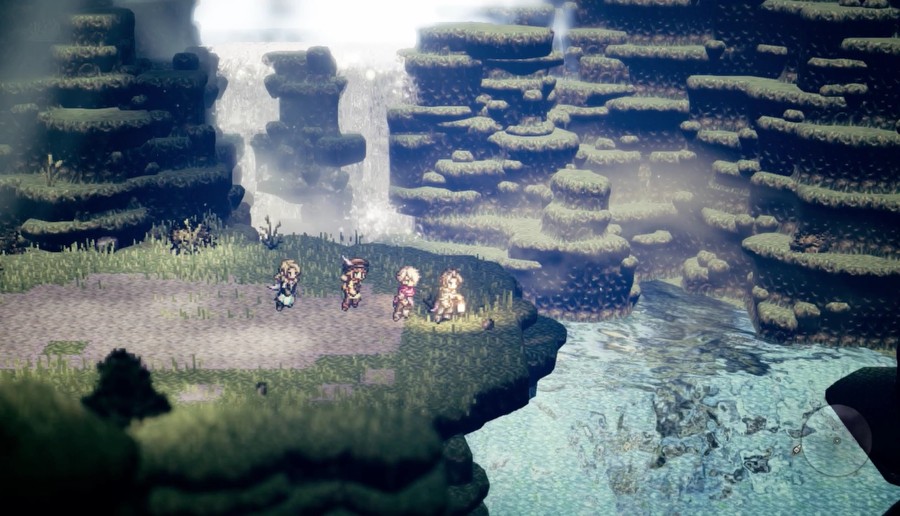 And another clearing that seems like it should have a boss encounter, but doesn't. Some of these do have actual bosses, I swear!

Next time, we'll explore another side dungeon while we tackle a Side Story.