Finally, the endings get right back to being interesting again.

This one requires beating Lavos after recruiting Frog but before defeating Magus. Which means defeating Lavos despite going through all the effort to prepare Frog for that showdown he never gets.

So we start off with quite a racket being made, before we fade in to... It's not your fault. We're the one's [sic] who created weapons... 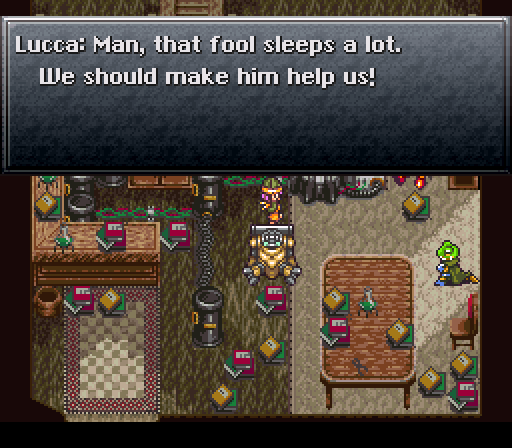 I think the localization of the endings were rushed a bit, that's two errors already. Frog got all hyped up for his epic showdown against Magus, only for Crono and crew to fool him into helping them kill Lavos instead. He's not really in the mood to kick back and relax. Instead of using JERK like I've been doing for these endings, I cheated my main file to keep the names intact.

I regret doing that now because this really is a JERK-style ending. The credits now start popping up between scenes. With the others not helping him, Frog decides to take on Magus and his castle alone. That means having to face Slash... ...and all one hundred monsters in Magus's Castle. And Ozzie too but to be fair he doesn't really count. Instead of foreboding silence, Frog's Theme blares for this bit where he triumphantly makes his way down to where Magus stands. Frog makes no effort of the forces within the castle, mere distractions before his inevitable duel against the wizard. And things play out similarly as before... Except this time, of course, Frog is alone. Except for you and I, this world is populated by cretins... At this point, Frog drops the act. You probably noticed by now, but the Olde Englishe accent does not appear once during this ending. Or, more likely, this ending's localization is rushed and Woolsey had no time to add it in. And so starts the epic battle between the great wizard and the noble knight.

...which we only get to hear as the credits roll. Love the sound effects, at least! Alas, there is only but one winner...