So this is a weird one. The window to trigger this is very tiny. You have to watch Schala open the door to Queen Zeal, and then leave before using the pendant on the Mammon Machine. Beating the game directly before and after triggers another ending, one that will have to wait a bit since it's kinda spoilery.

As for the ending itself, it's probably my favorite of the non-traditional ones for reasons that should quickly become obvious. 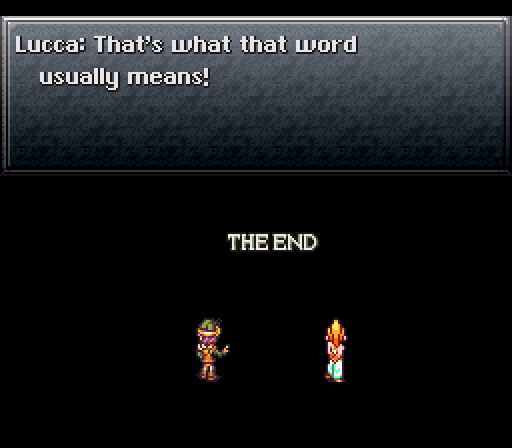 But things were just starting to get interesting!

Well, come on folks, let's do the "ending" thing. 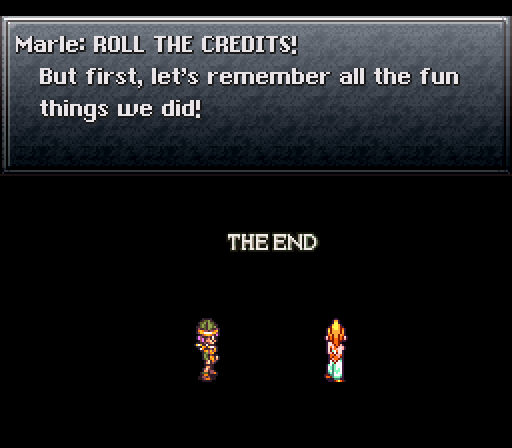 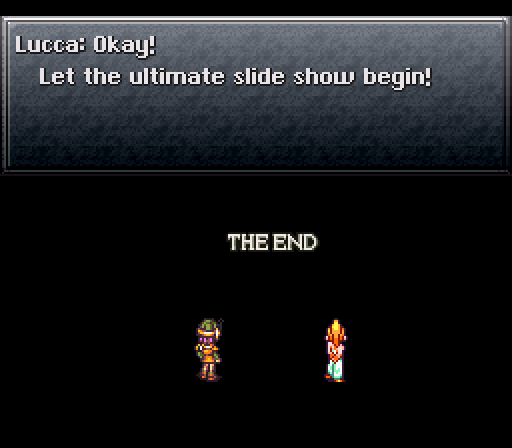 This ending is Marle and Lucca reminiscing about their adventures and the people they met along the way... 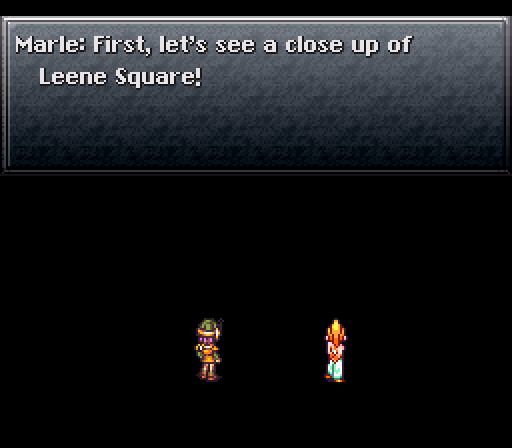 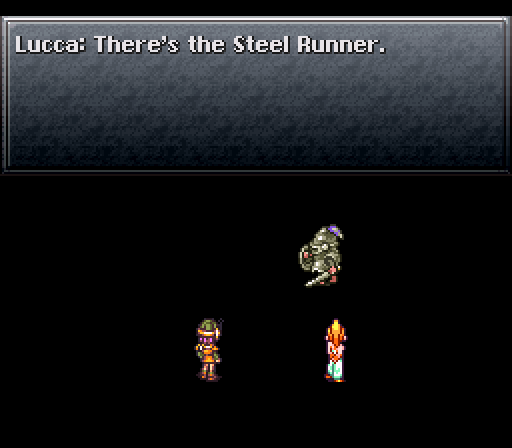 I've never understood why anyone would want to run for 3 hours at a stretch...

Forget that! Can you imagine what the inside of that armor must smell like?

What a lovely thought, Lucca. Let's get on with the show, OKAY?!

You see, when I say "people", I really mean "all the hot studs". This ending is Marle and Lucca talking about how hot and sexy the various men they've met are.

As you may expect, this ending gets a bit butchered in this translation, though in some instances that may be for the best, as we'll soon see... 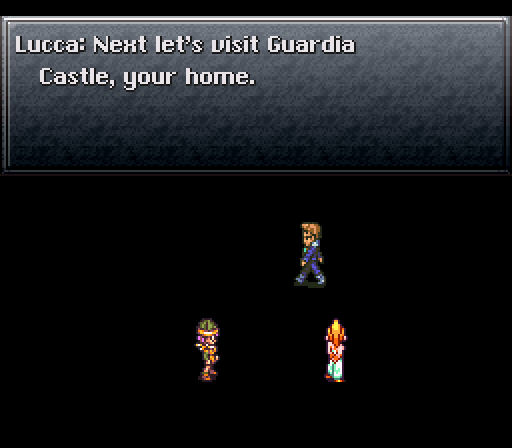 But of course, my dear! 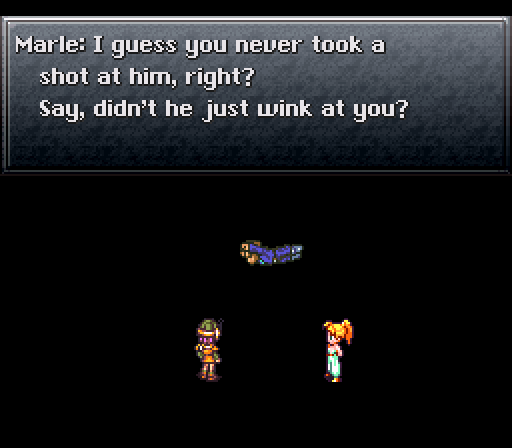 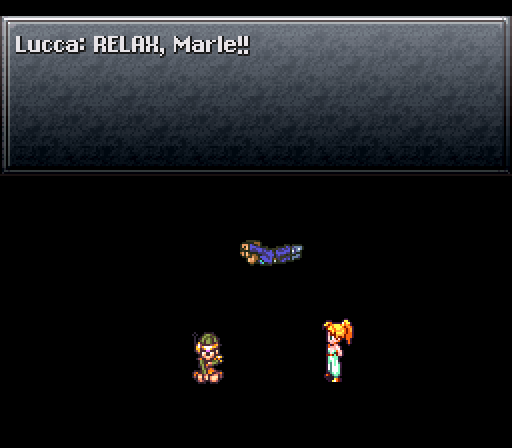 The Japanese version has Marle say this guard is actually a woman, which is why Lucca gets flustered. So, uh, score one for Woolsey. 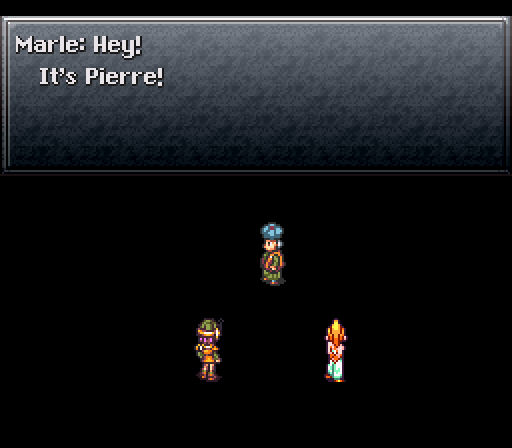 Wouldn't want anything to do with someone like HIM. Too shifty... He should be put on trial!

It's half lusty male-gazing, and half mocking the lamer NPCs. It's pretty amazing this ending exists in the first place, and it's great simply because it's Marle and Lucca having fun and showing off a side of their characters we'd never get to see in the main game. 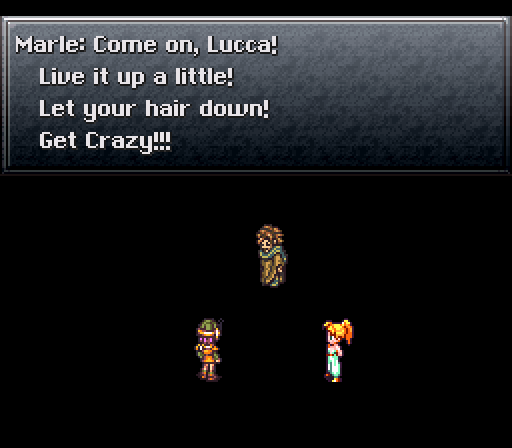 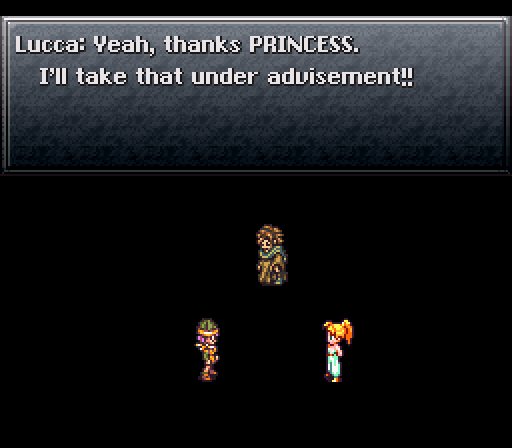 There's the seed. Hope it grows...

In the Japanese version, Marle and Lucca are trying to tell the guy to cheer up. Definitely prefer the Woolsey version here. 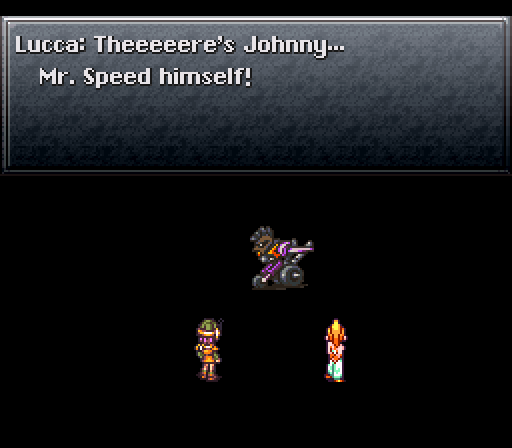 Someone ought to tell him to take a permanent pit stop. Look at that hair!

Hey, check it out! He's really a tricycle! Pass him!

Try again when you learn to RIDE.

The Japanese version hints at a "He's probably too fast in all the wrong ways" joke, but then the "He needs to learn to RIDE" joke is all Woolsey. 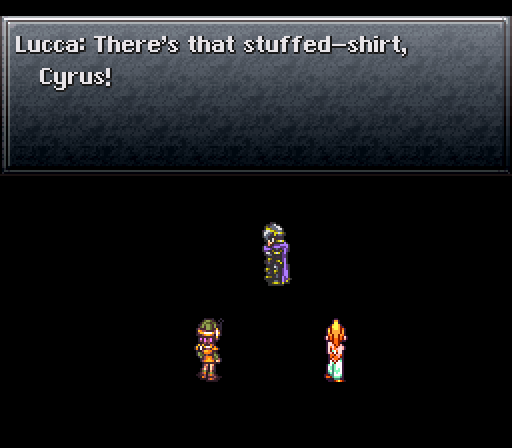 He IS pretty handsome, though...

But WHERE does he buy his clothes?

Hey, did you hear? He plucks his eyebrows!

In the Japanese text, Marle claims he pencils in his eyebrows. 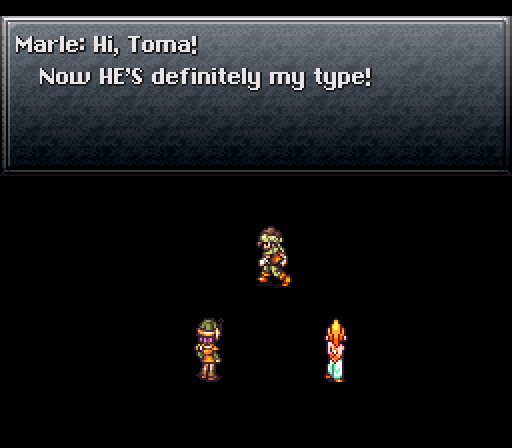 Probably has a dozen girlfriends.

Actually, I see him as more of an intellectual!

Japanese version has Lucca insinuating that he may be gay because...? 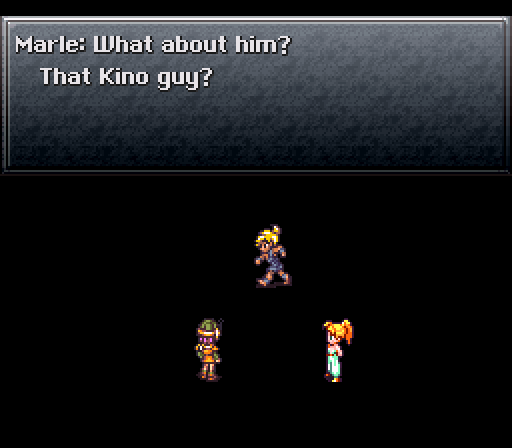 Total Neanderthal! Throw him a bone! 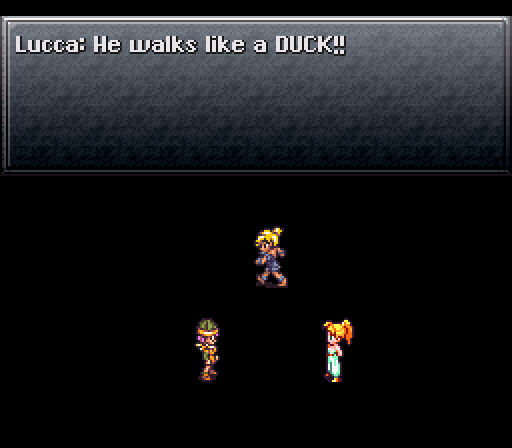 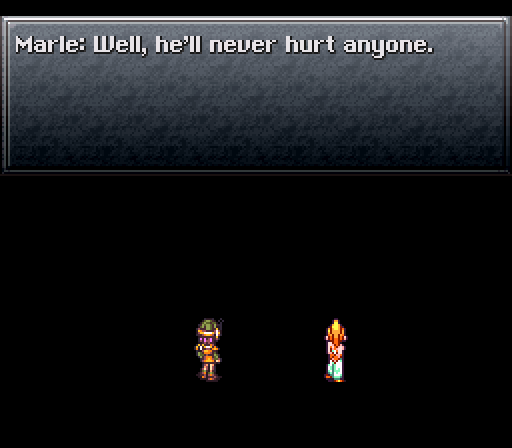 Then Crono shows up and interrupts the two. 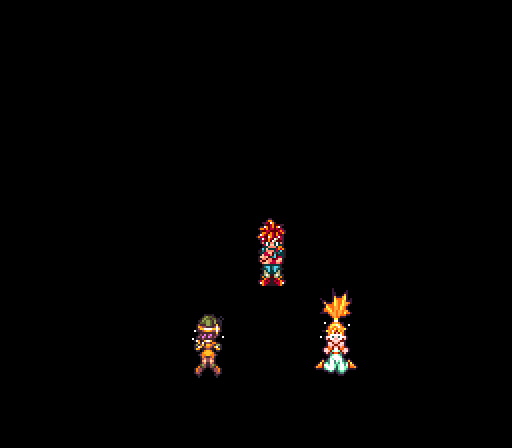 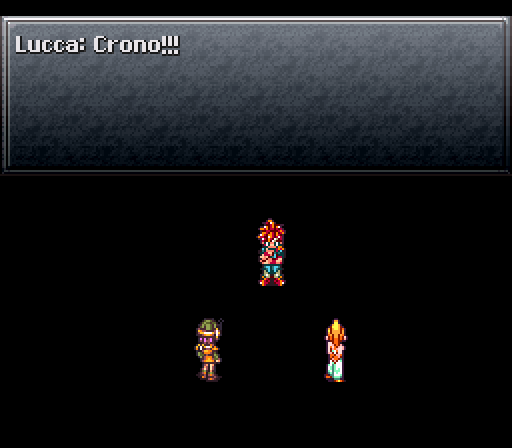 So, we got a little carried away! 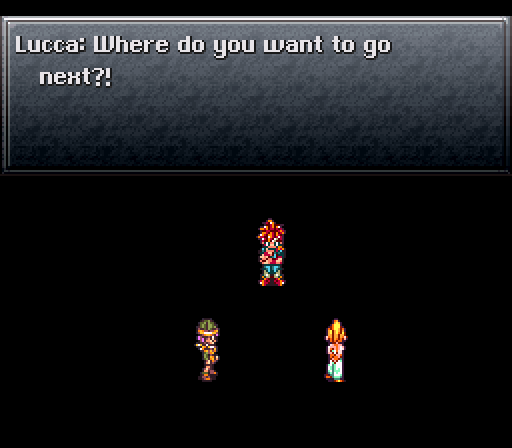 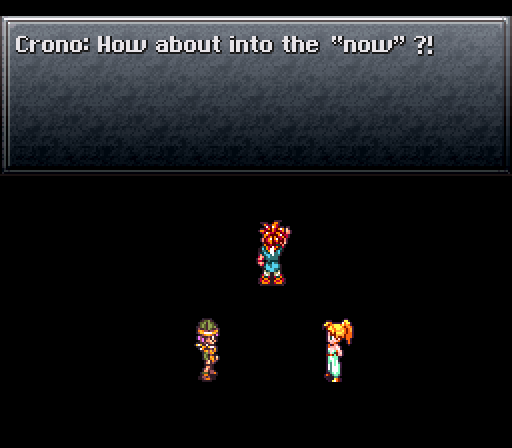 Now, as in the present?

Okay! Back to the present! 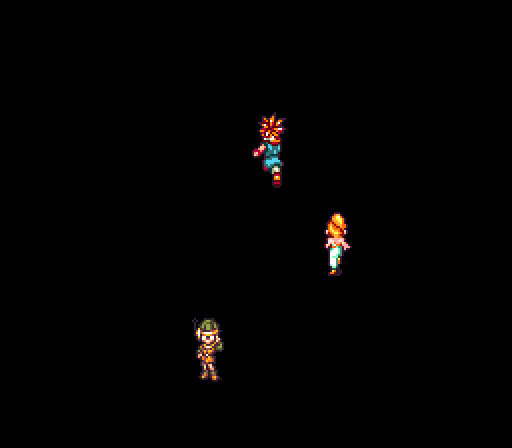 Yep, this is the one and only instance in the game that our silent protagonist actually speaks, at the end of the most obscure and silly ending.

It's a great way to cap this off. 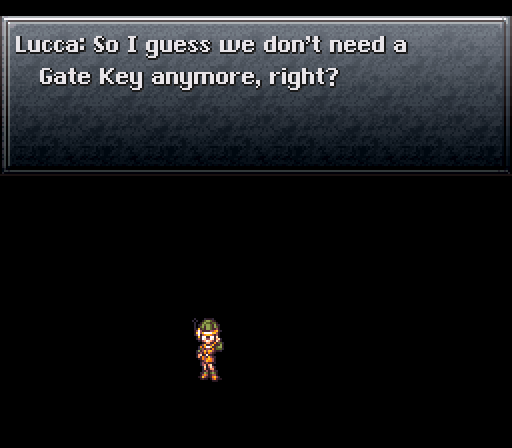 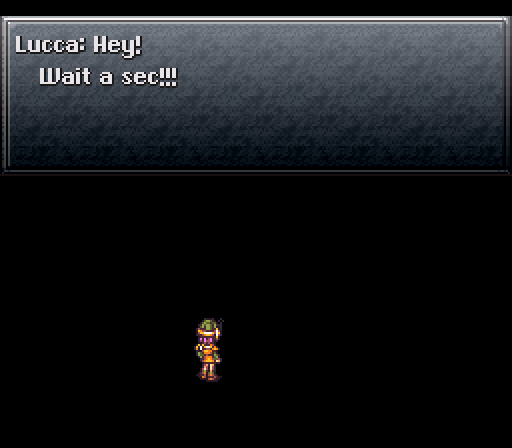 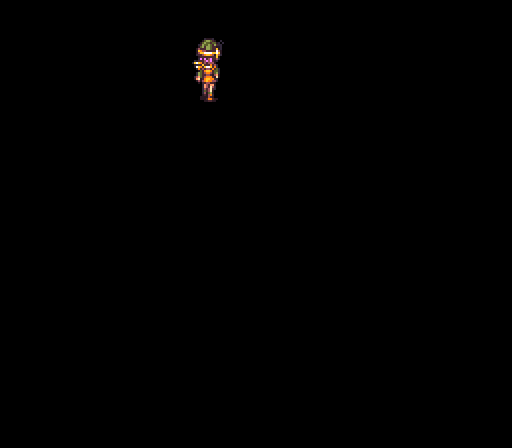 This ending is so goofy and nonsensical, it's little wonder it's my favorite.