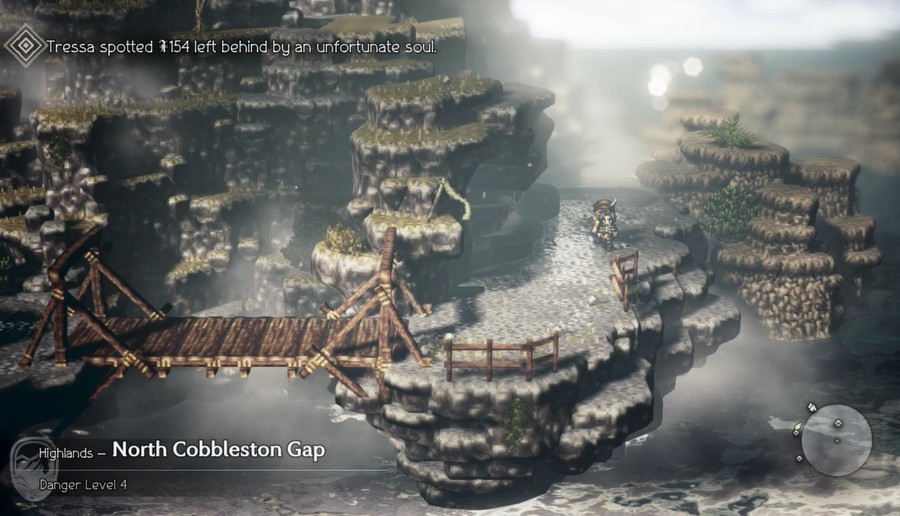 The Highlands are, well, high. This is a mountainous area, with the terrain supporting many twists and turns and branching and looping paths. 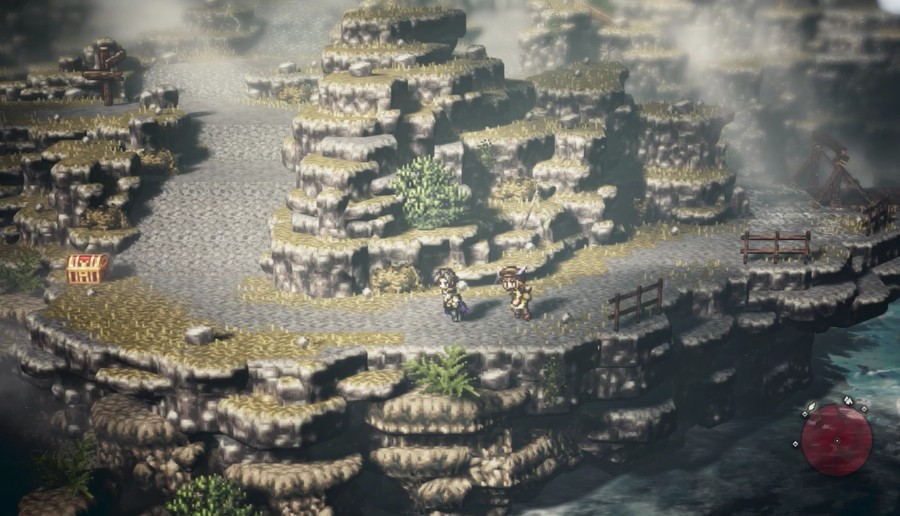 And, of course, treasures along the way. 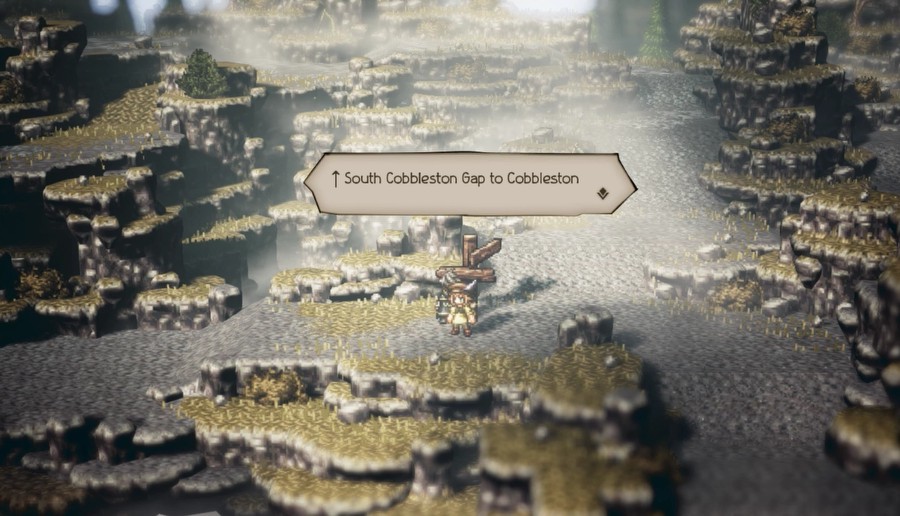 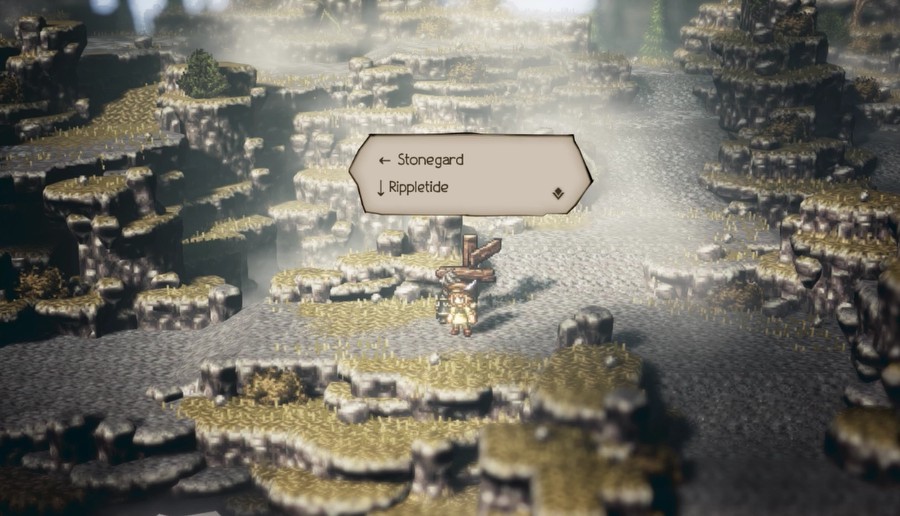 Stonegard is for Chapter 2 and 3. 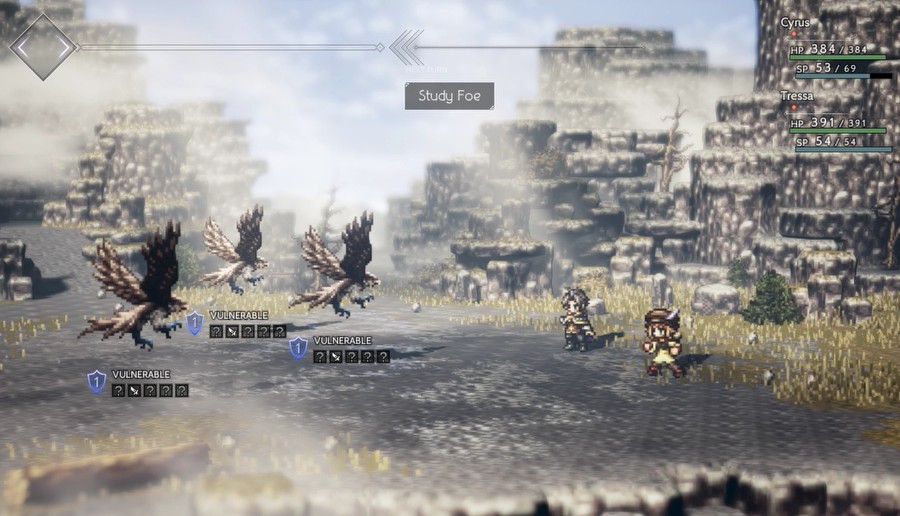 Giant Falcons. Nothing too exciting attack-wise. 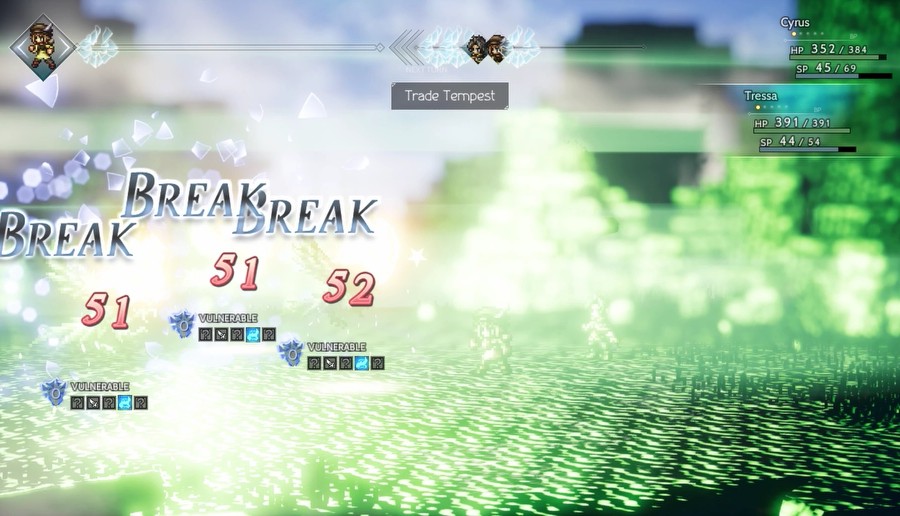 I picked up Trade Tempest for Tressa, dealing wind damage to all foes. As I said earlier, I prioritize target-all moves first because they make random encounters significantly easier, even if they aren't that good for bosses. 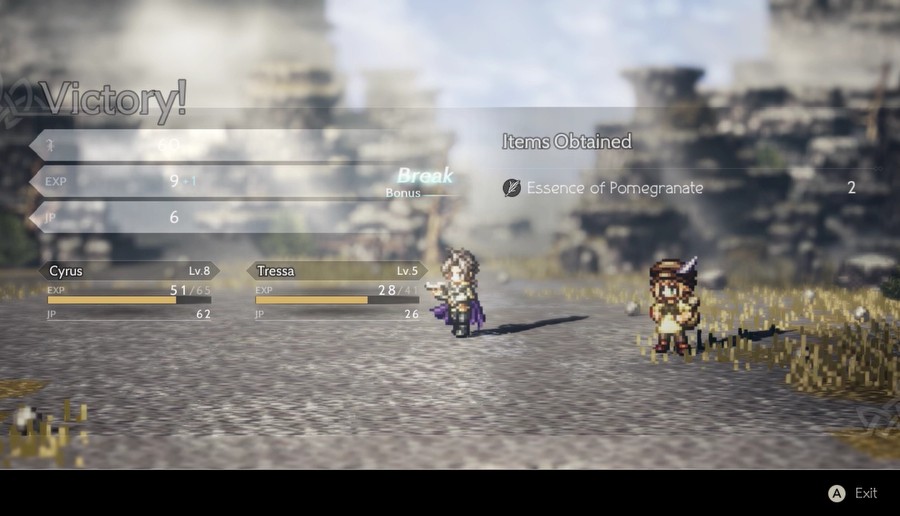 There's one other food restorative I haven't mentioned yet, Pomegranate. These items add BP during battle, which becomes significant later in the game once you'll be wanting to spam multiple high-BP moves at once, whether multiple Divine Skills or stack a lot of turns on a buff or whatever else. 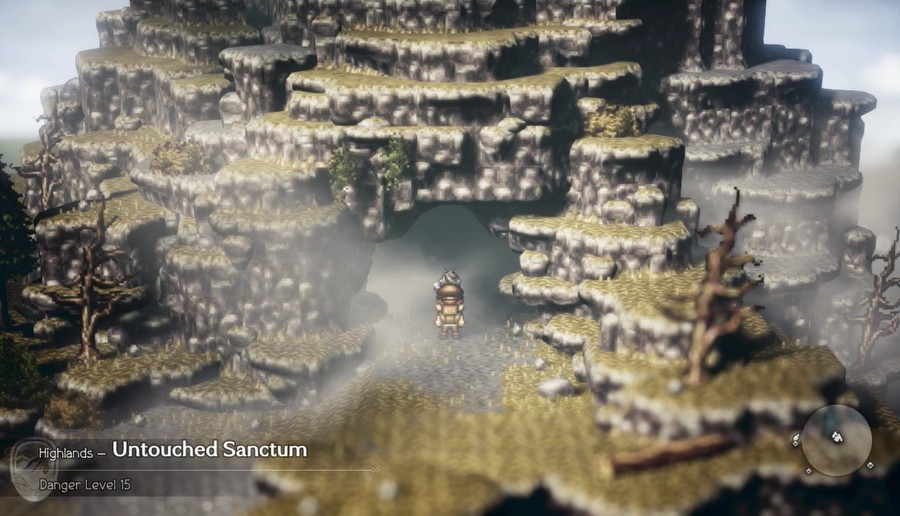 The dungeon of this area. Tagged it for later, as I believe one of the Side Stories will bring us here. 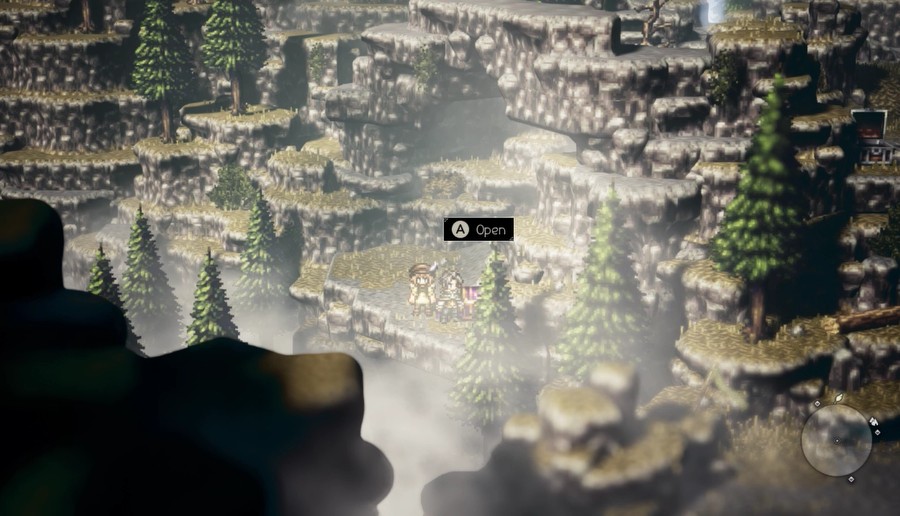 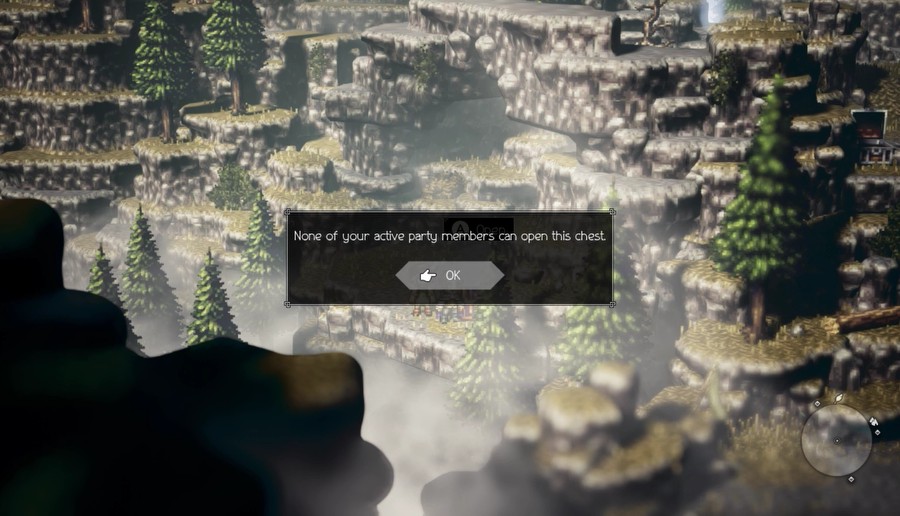 A purple chest. Only Therion can open these, to the consternation of many. There's usually some good loot in these, too! 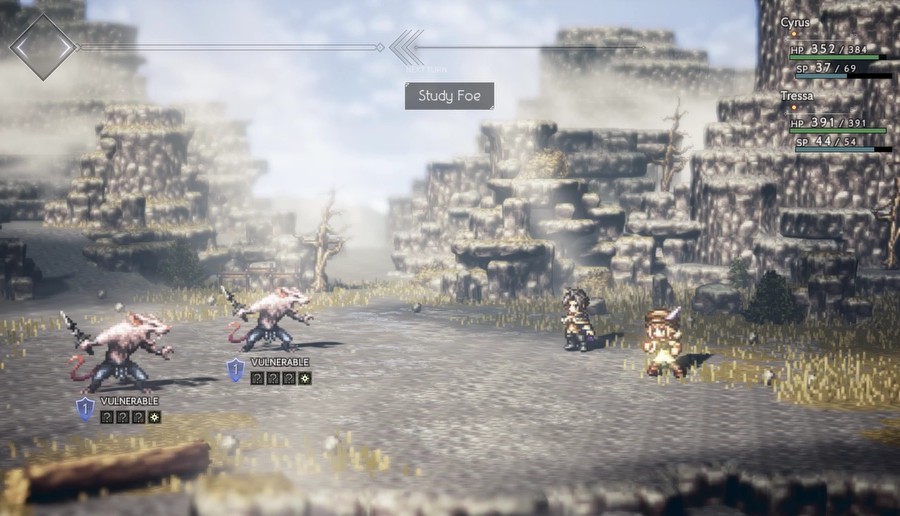 Highland Ratkin. There's a lot of these animal-man hybrids in the different regions. 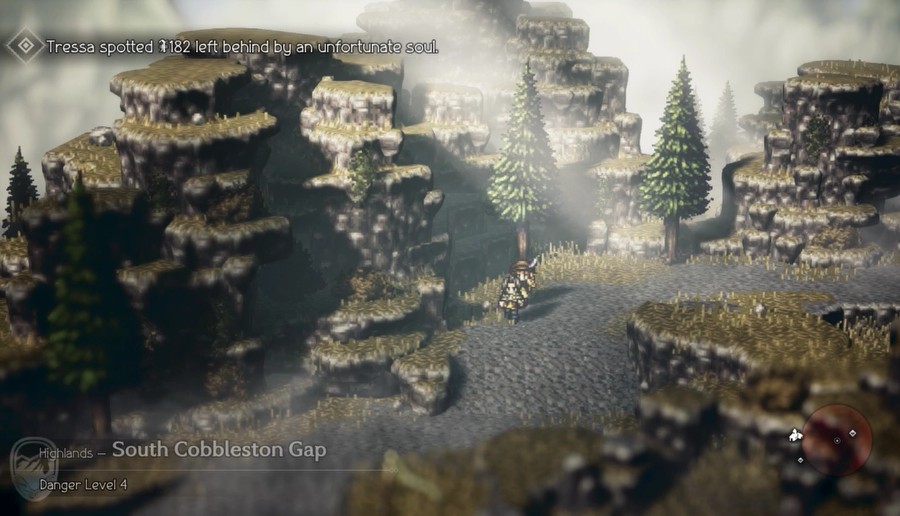 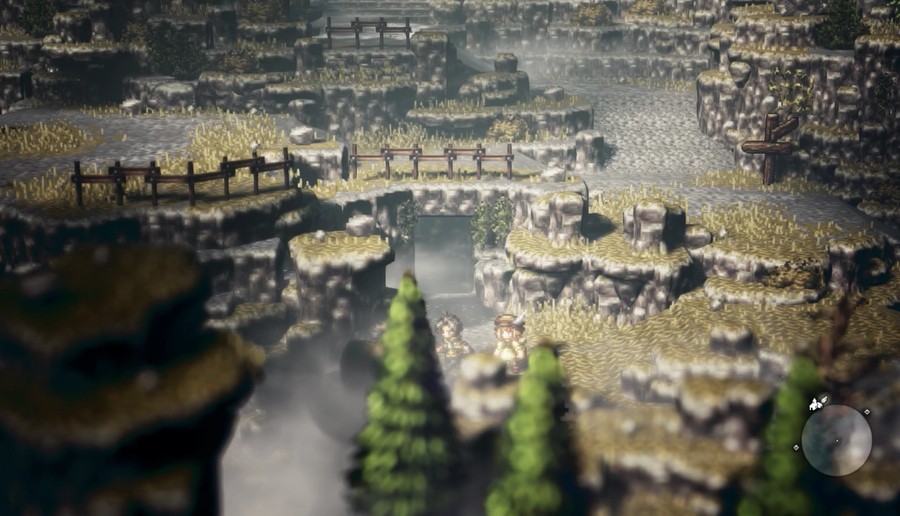 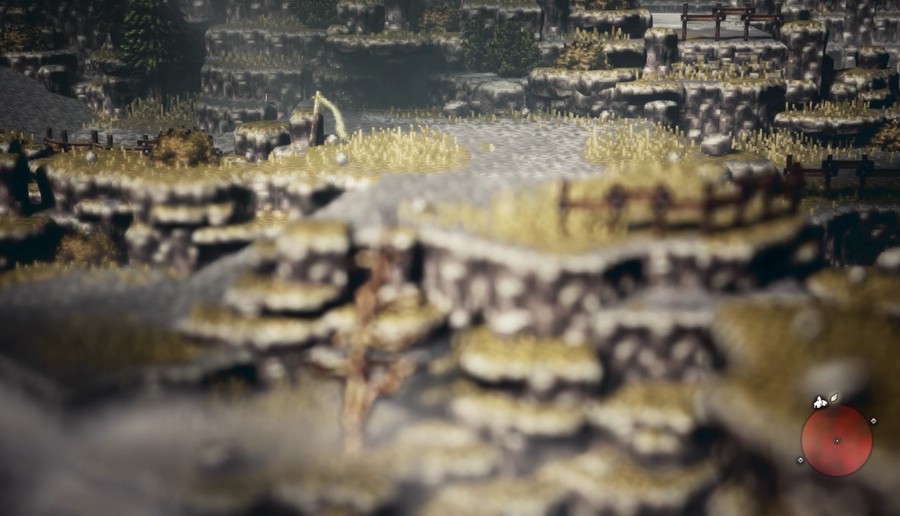 A nice semi-hidden path that leads to a chest with cash. 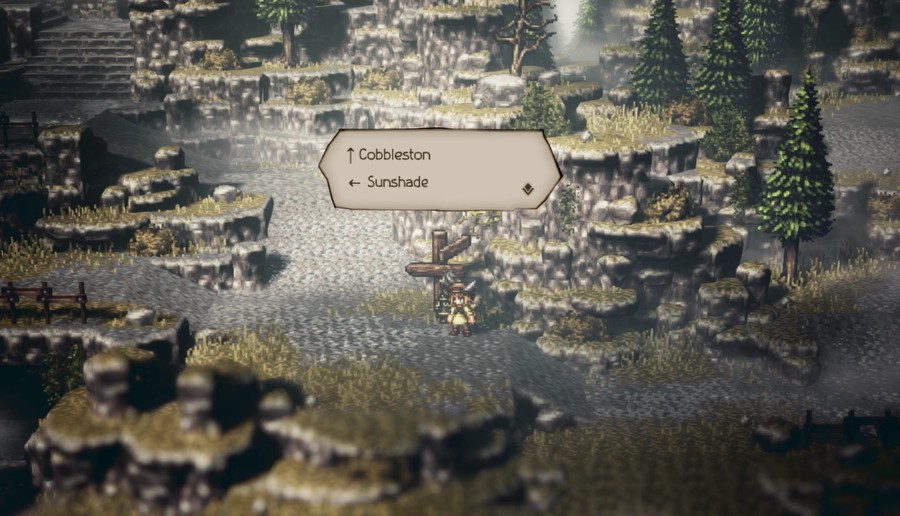 Sunshade is our ultimate destination since we're on our way to recruit Primrose. 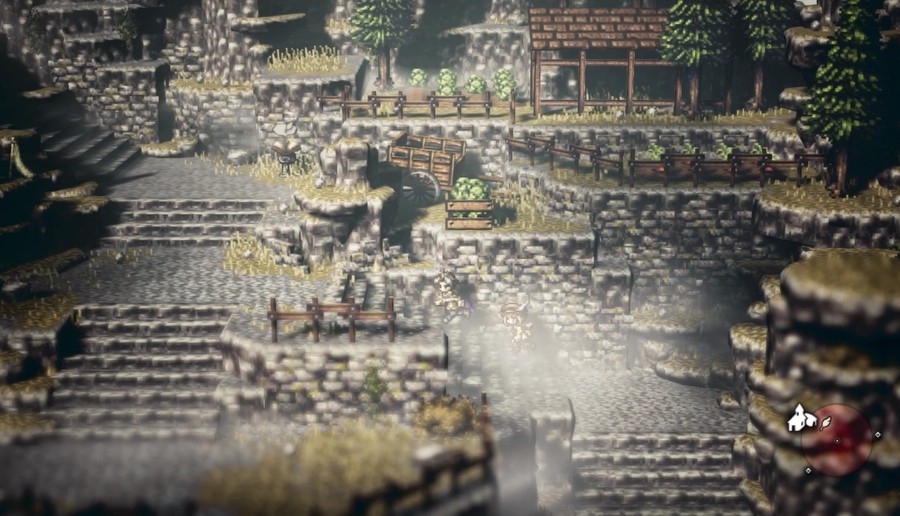 But it doesn't hurt to stop by Cobblestone briefly since merely entering the town allows us to fast travel there later. 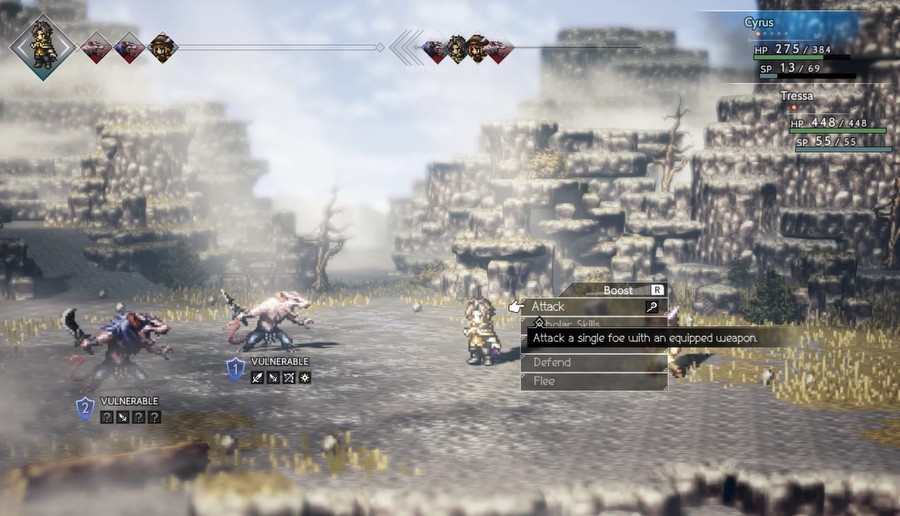 And there's the second tier of Ratkin. Still nothing exciting attack-wise. 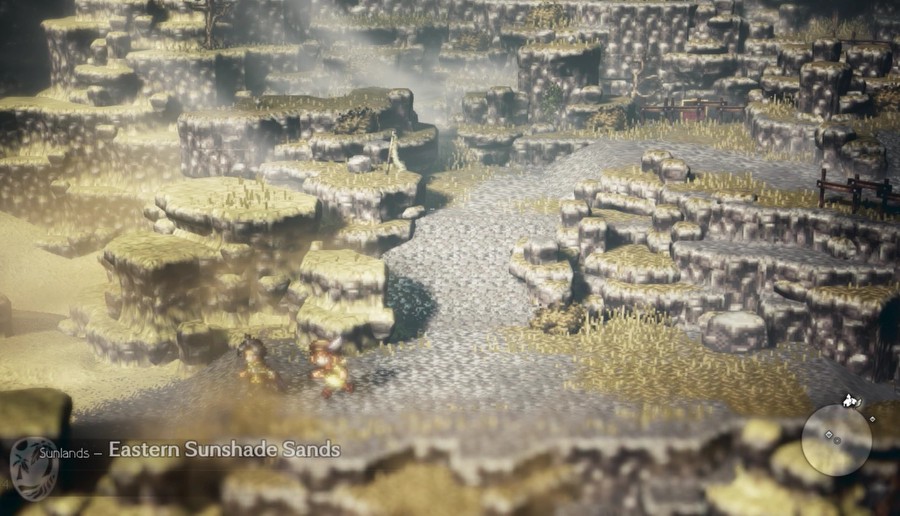 Time for the other area! 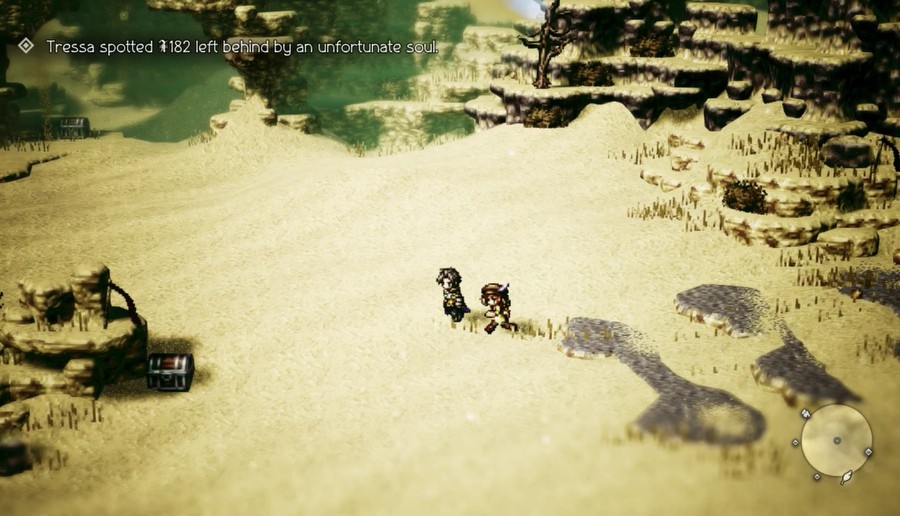 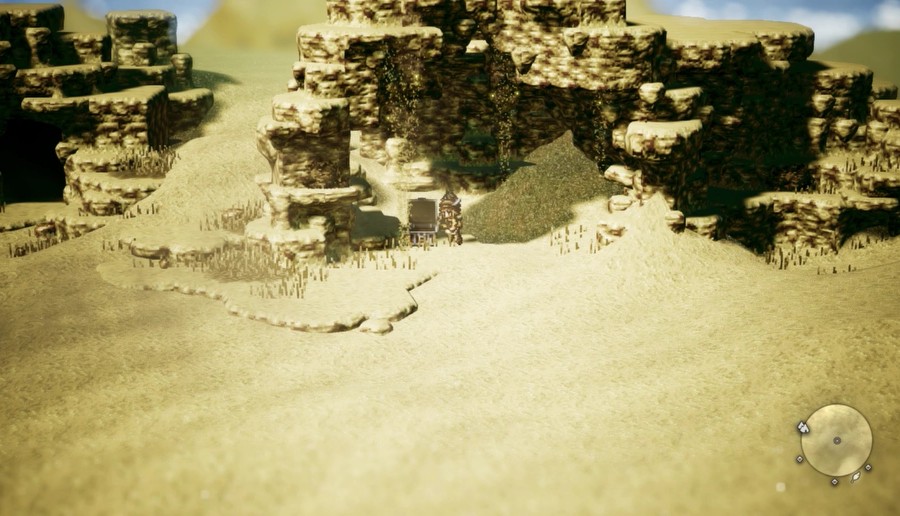 The screens seem large, but because we don't have to walk along a bunch of random paths and our way forward is obvious, navigating these areas end up taking way less time, which is always nice. 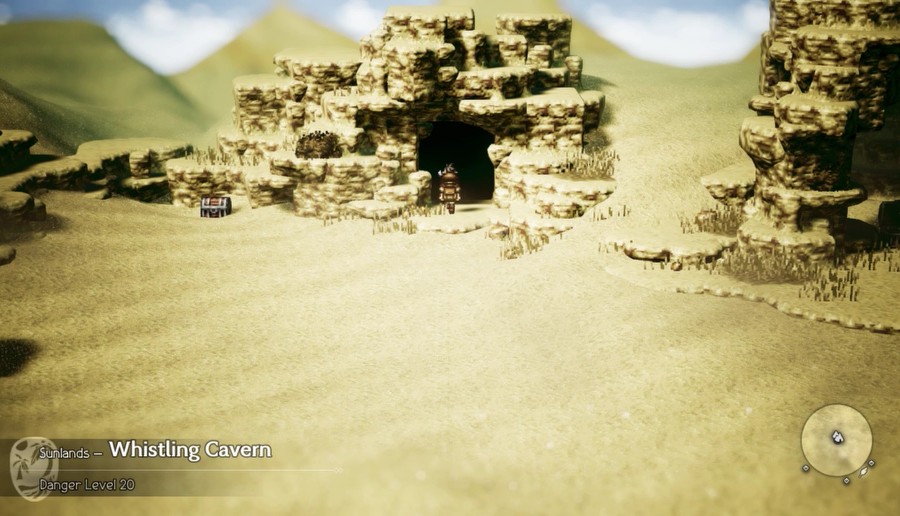 Our requisite side dungeon for the future. 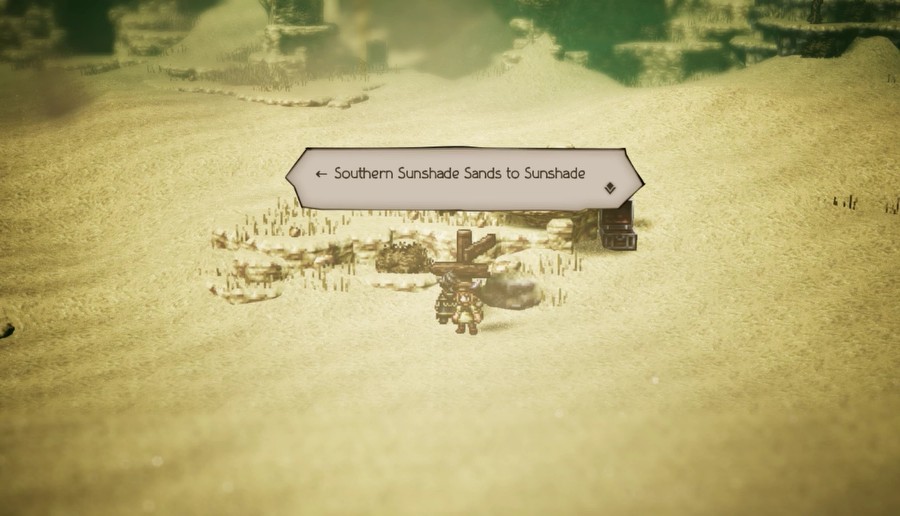 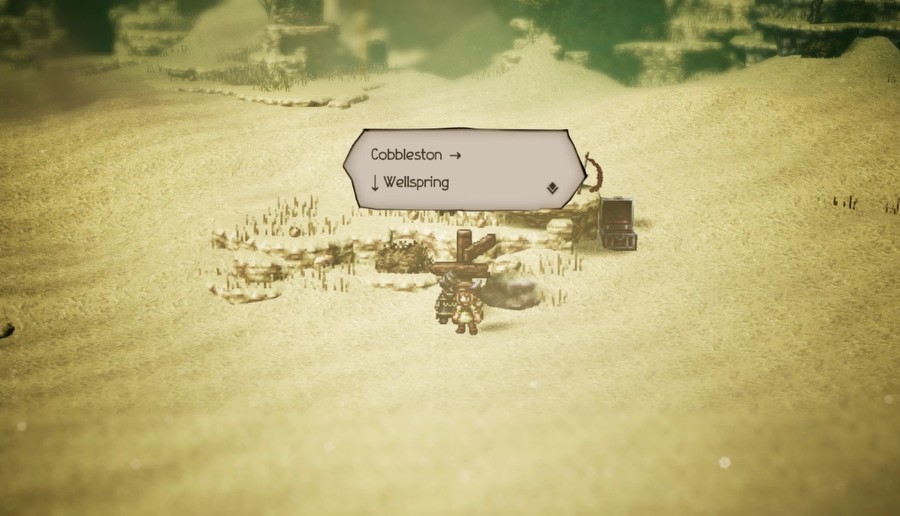 Wellspring is the Chapter 3 town of the region. Six of the eight towns get a Chapter 2 and Chapter 3 of different characters. Two characters share Wellspring for Chapter 3, while Cyrus and Tressa share a Chapter 2 town in Quarrycrest. That said, the area surrounding Wellspring has the same enemy difficulty as the other regions, and we'll want to explore the next area later anyway for...reasons. 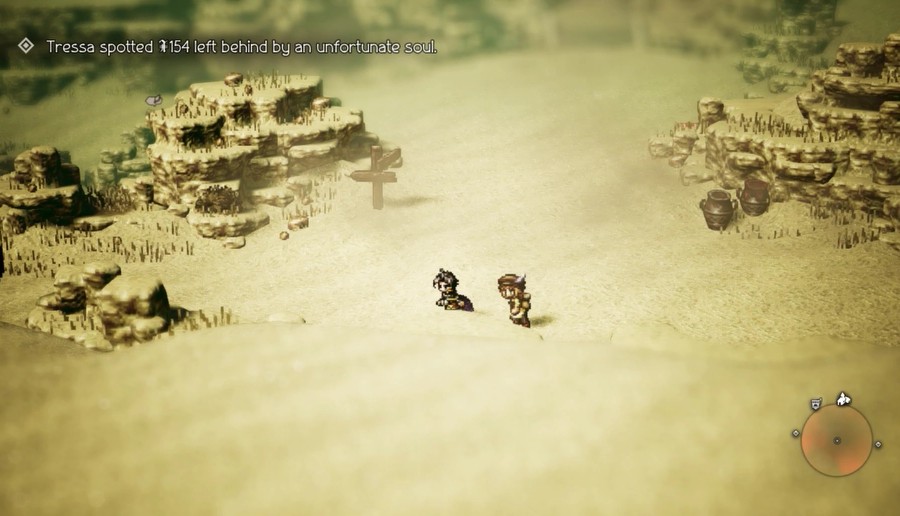 You may not notice it, but we're in the Southern Sunshade Sands. 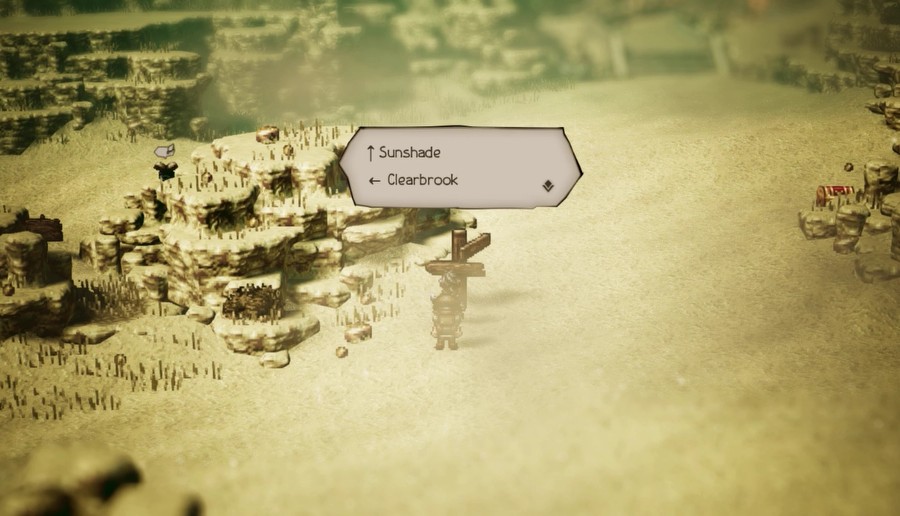 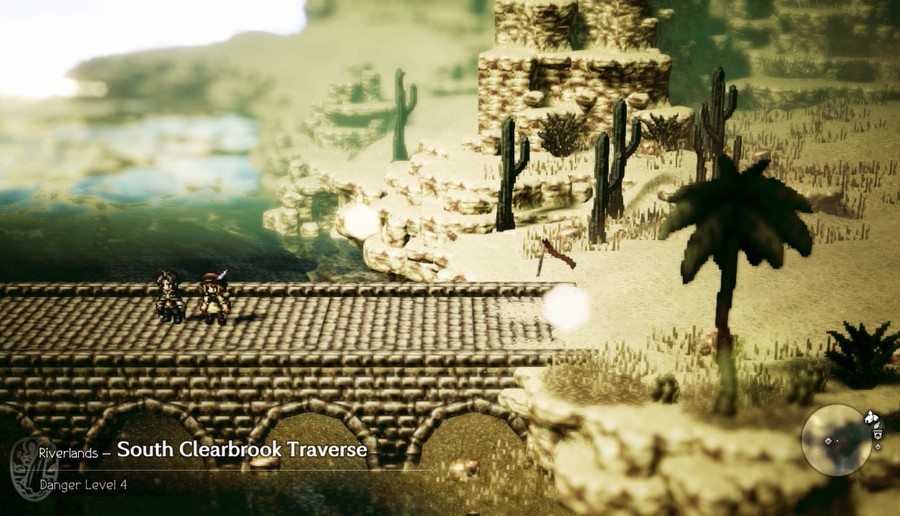 Going further west would take us to the Riverlands and the small town of Clearbrook, where Alfyn resides. 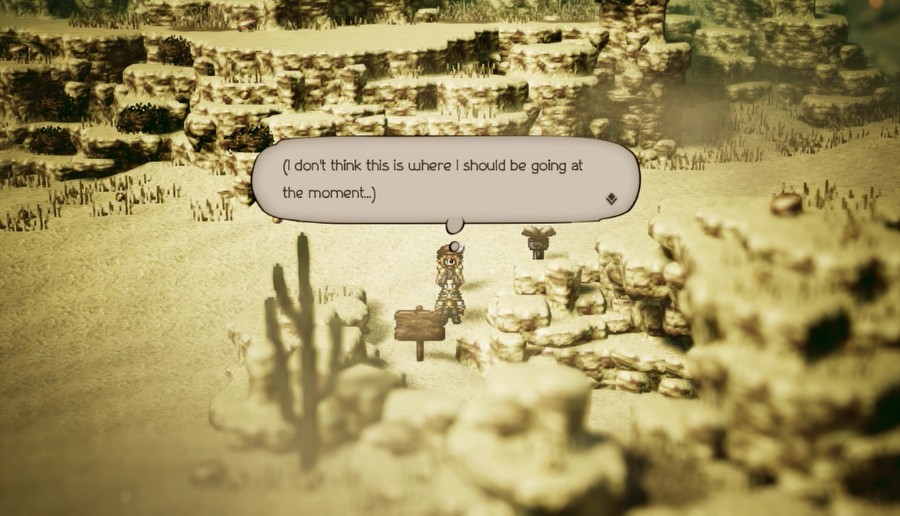 This sign mainly pops up to stop us from entering story dungeons before the story allows us to go to them. Though this one's a bit different for whatever reason. 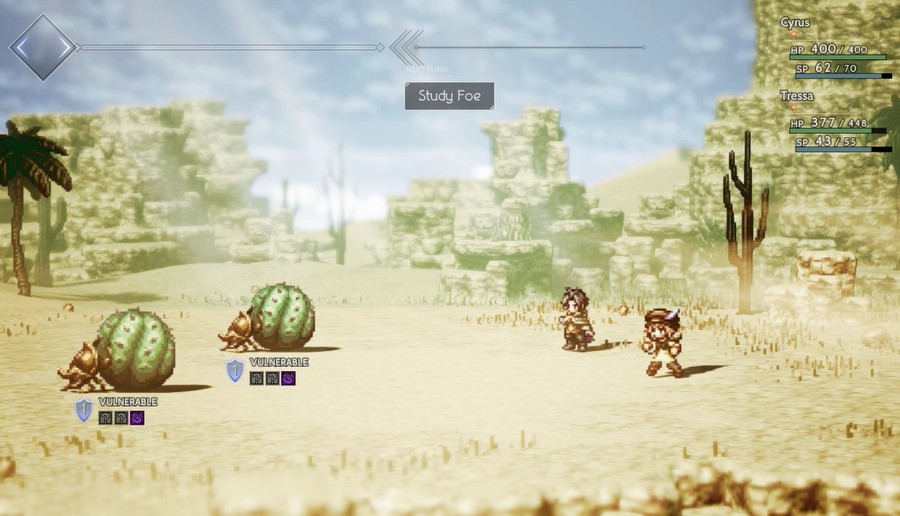 This was somehow the only enemy I ran into, the Cactus Roller.

These enemies really don't have much else of note to them so far. These early foes mainly just attack. 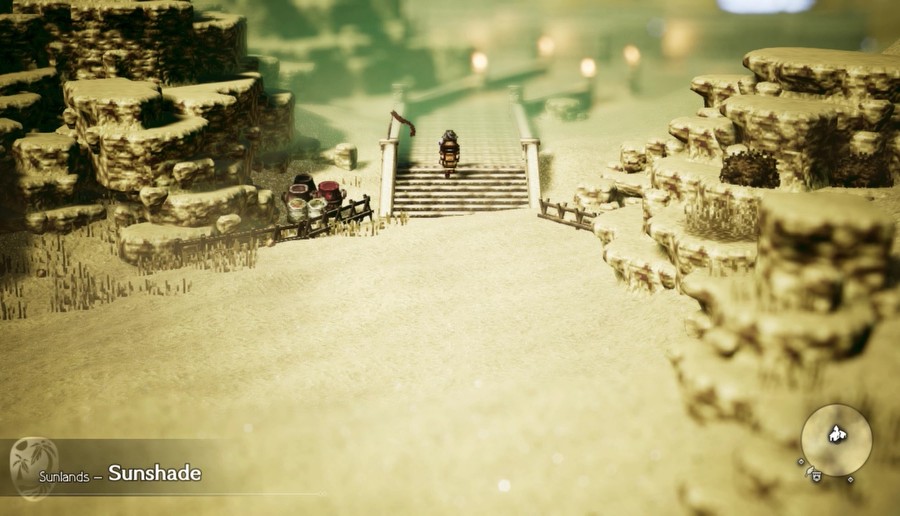 Next time, we begin Primrose's story as we experience tonal whiplash from the most cheery and lighthearted story of Tressa to the dark and messed-up story of Primrose. Reader discretion advised.