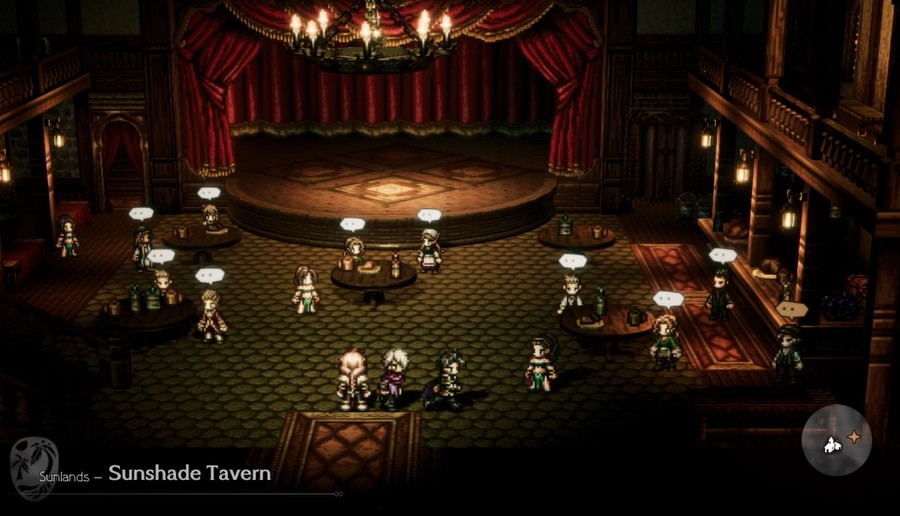 Today's Side Story takes place in the Sunshade Tavern. 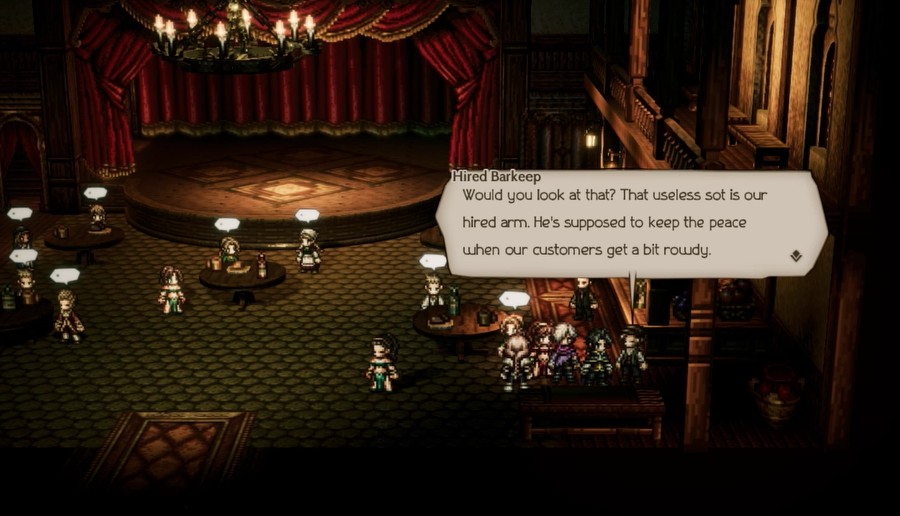 But all he does is drink, not work. His coin disappears as quickly as the sands in an hourglass. Maybe if someone actually bested him in a fight for once, he'd learn to take his position with a bit more gravity. 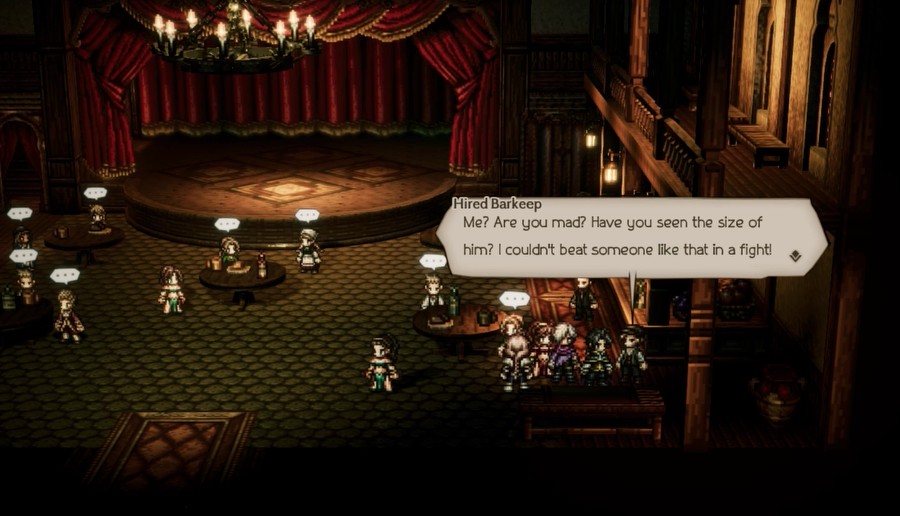 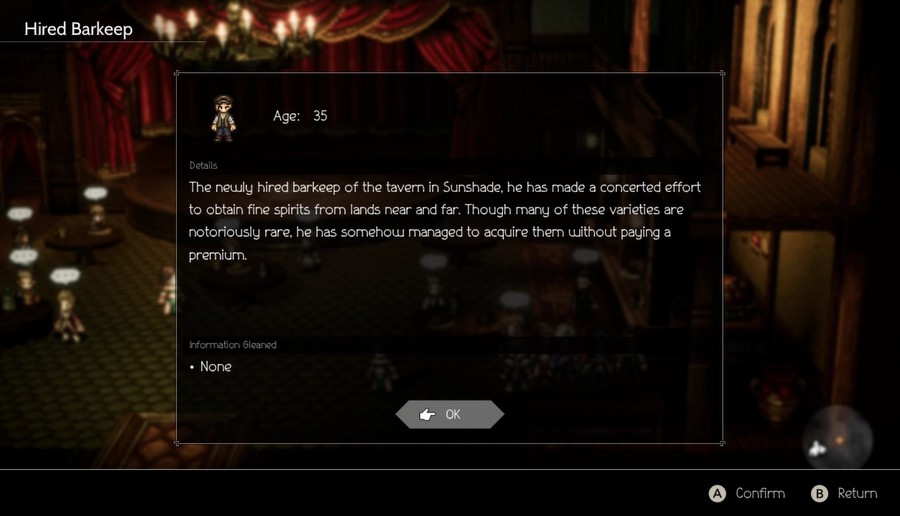 So today we're gonna beat up a drunk. Business as usual, really. 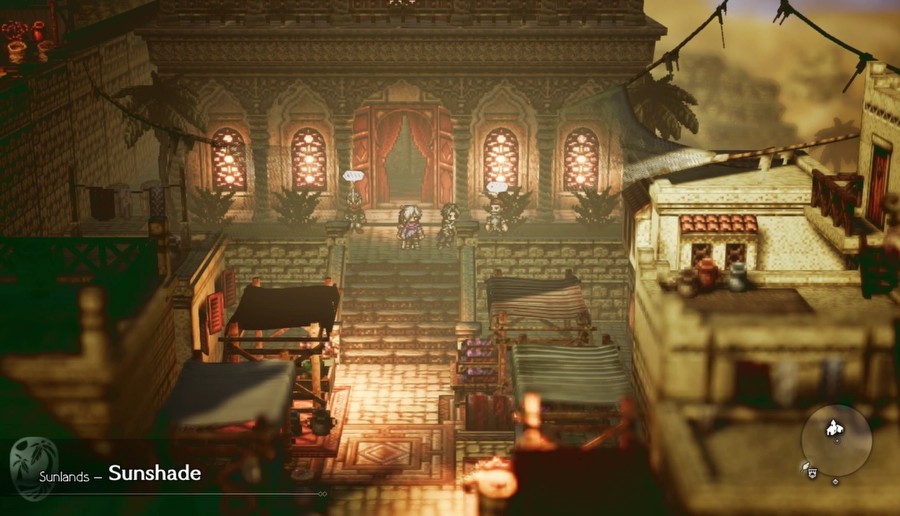 To our right is the drunkard in question. 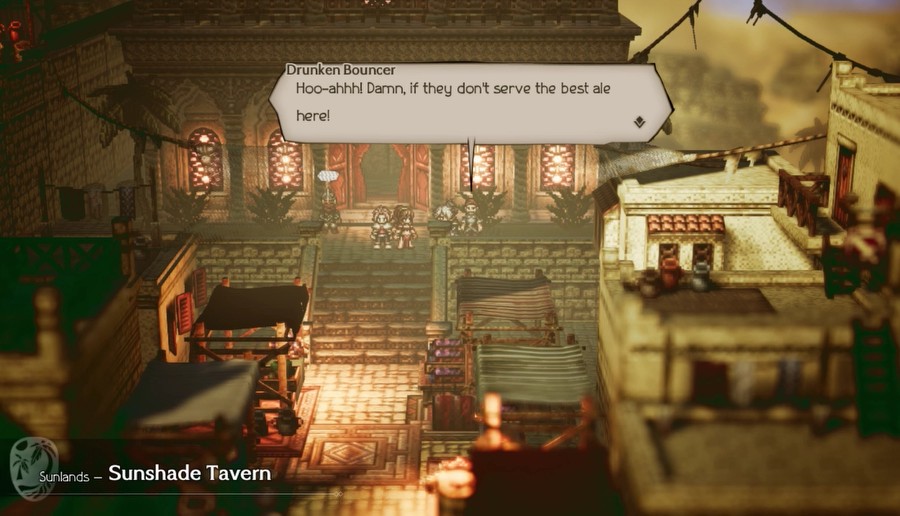 Urp! And who're you? You lookin' for a dance? I'll take you on, sweetheart. 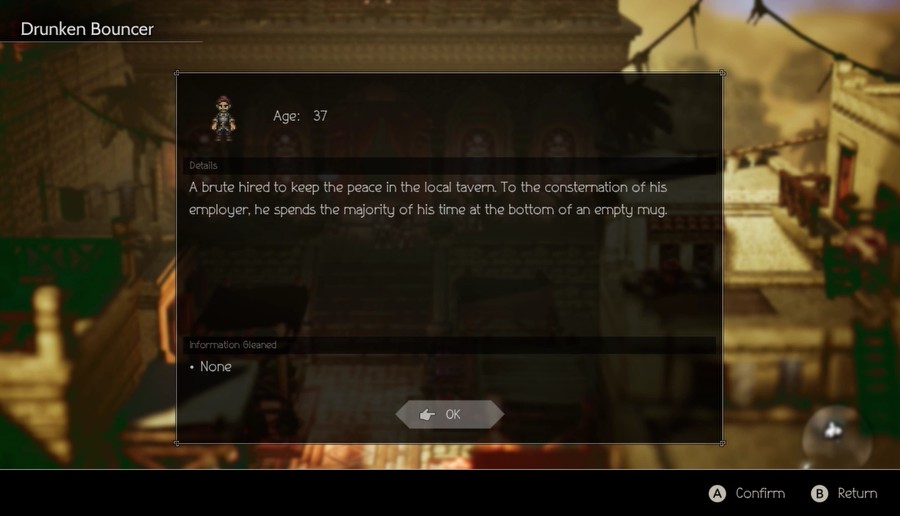 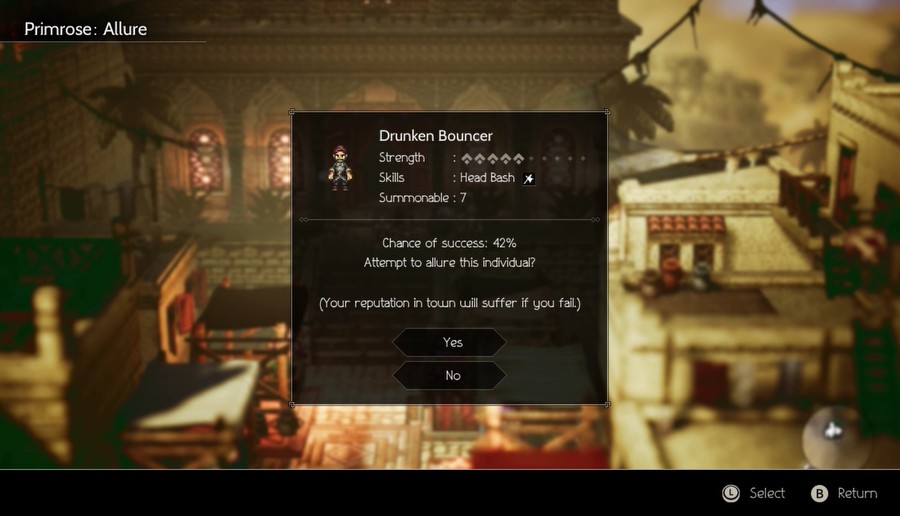 This guy's no slouch. Five stars seems pretty high, but this is still doable even in Chapter 1. 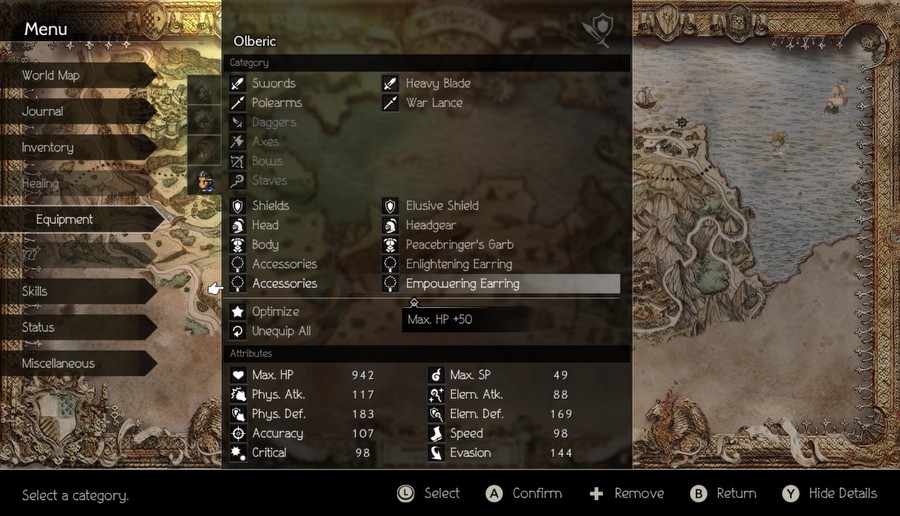 This guy has a lot of HP, so you always want Olberic in a battle of attrition since H'aanit might burn through her monsters too quickly.

Thinking about it, both Olberic and Linde hit swords and polearms, so most duels are designed around having one of those two attack methods. Clever stuff. 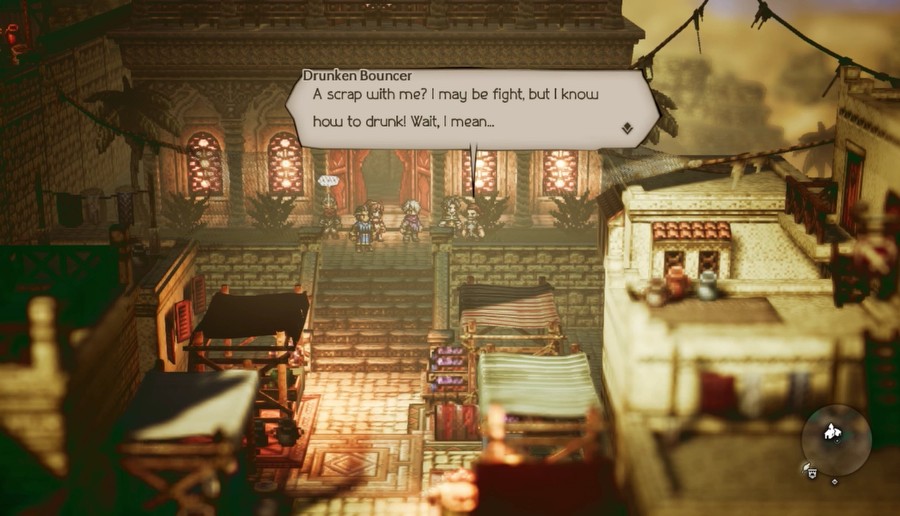 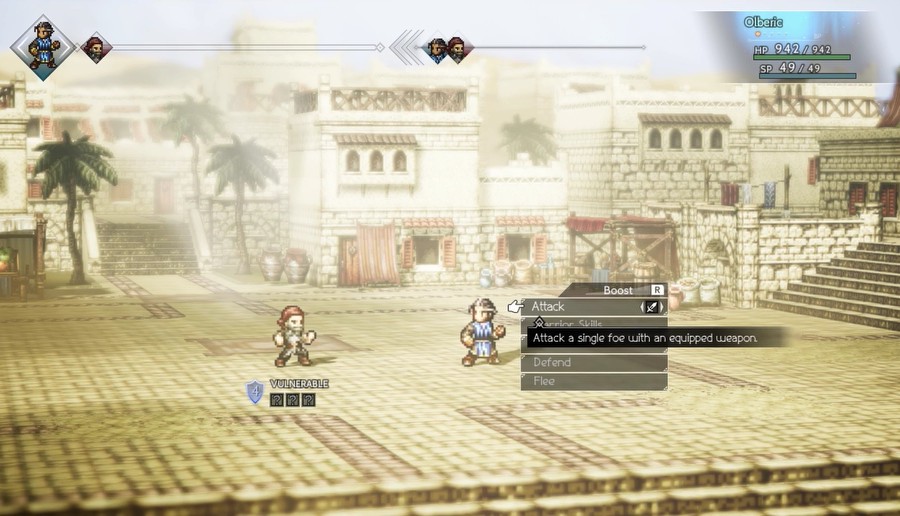 This guy has four shields to burn through, with a weakness to polearms. The Thousand Spears skill would be nice right now (even if I can't really afford using it much). 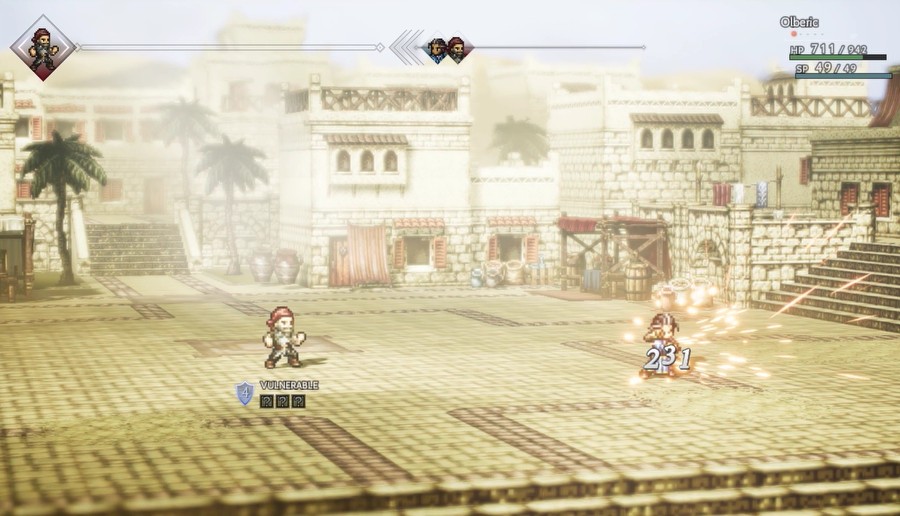 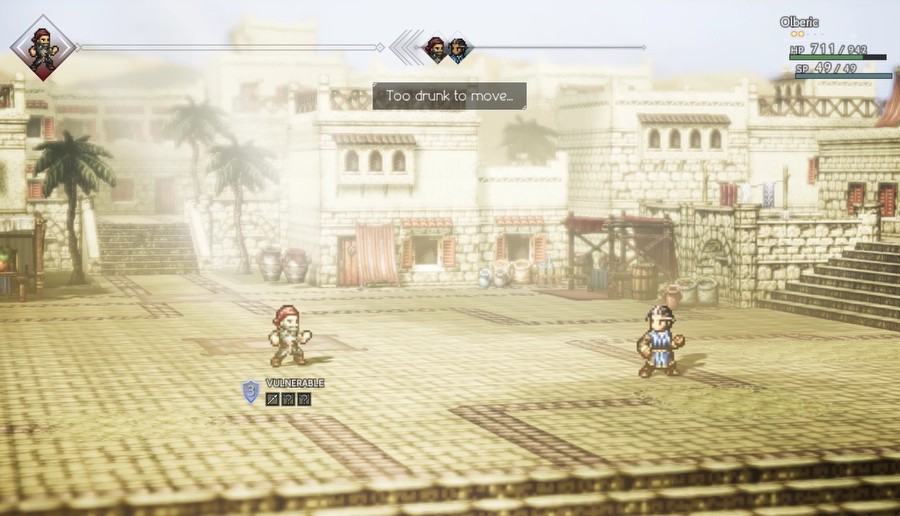 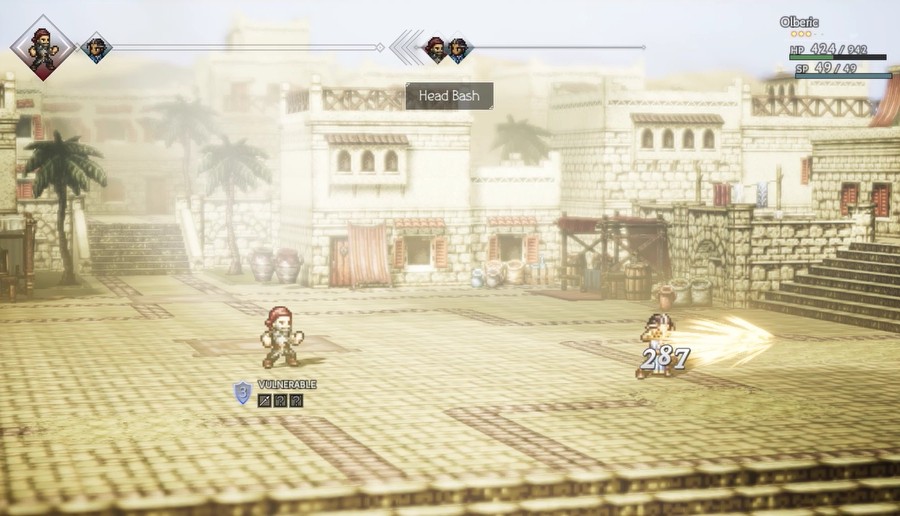 Sometimes he'll waste a turn doing nothing, but most of the time it's a nasty attack that can deal up to 300 damage a hit. 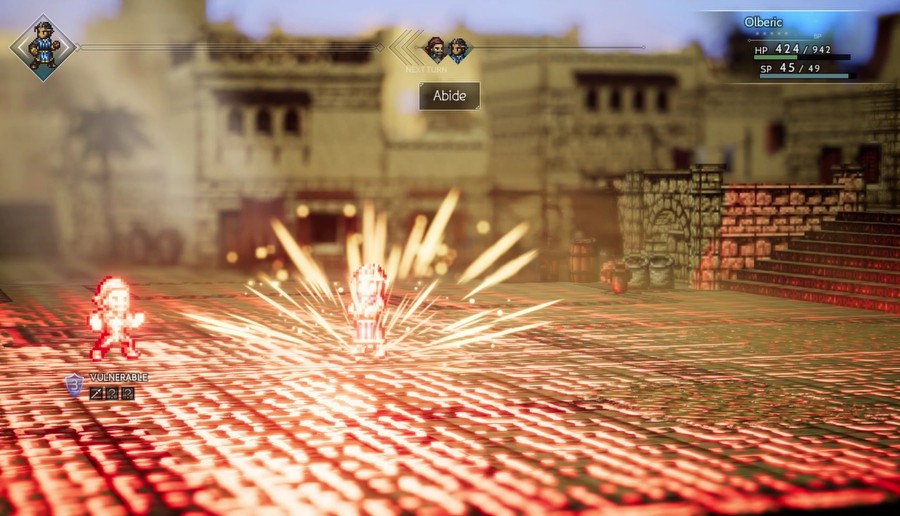 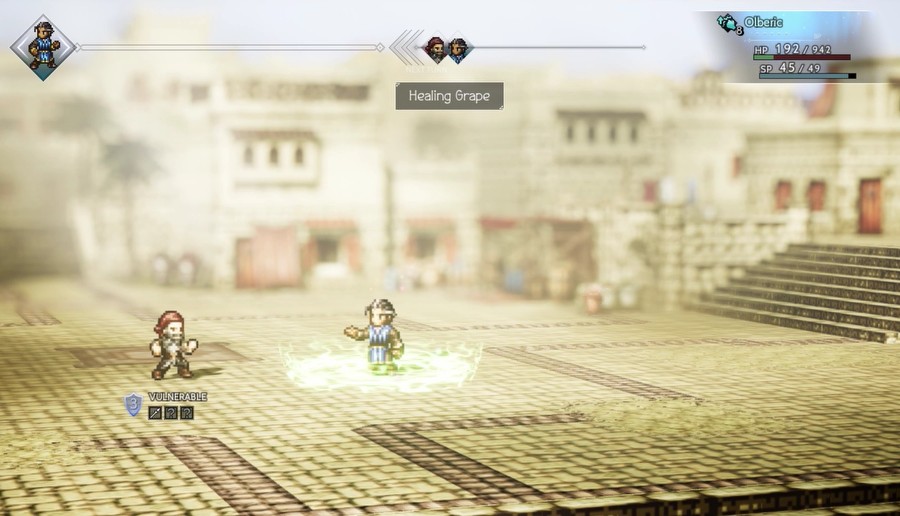 My strategy is simple enough. Heal once HP gets below 500 HP, mix in Max-Boost Abides to boost damage, and chip away shields until I break 'em, and then... 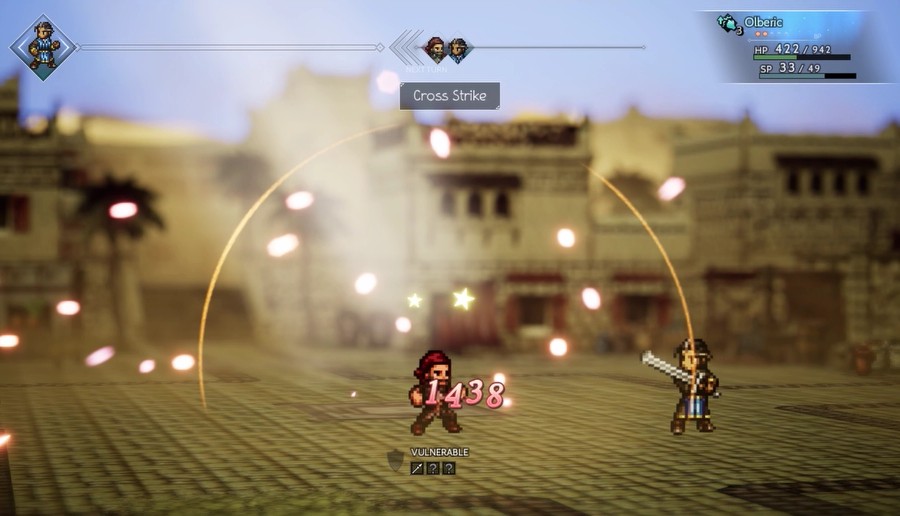 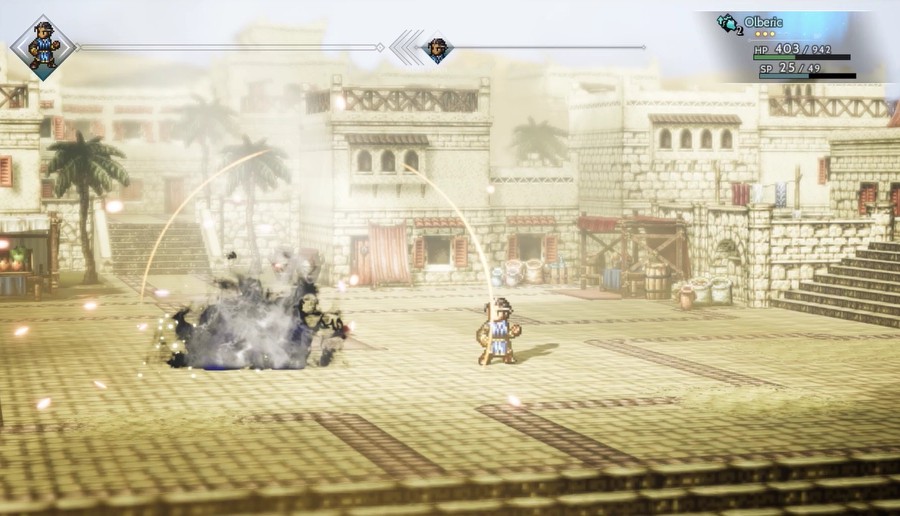 It still takes three of those and a bunch of chip damage to finish him off, and I'm on the defense for the majority of this fight. I get it done in slightly under six minutes. 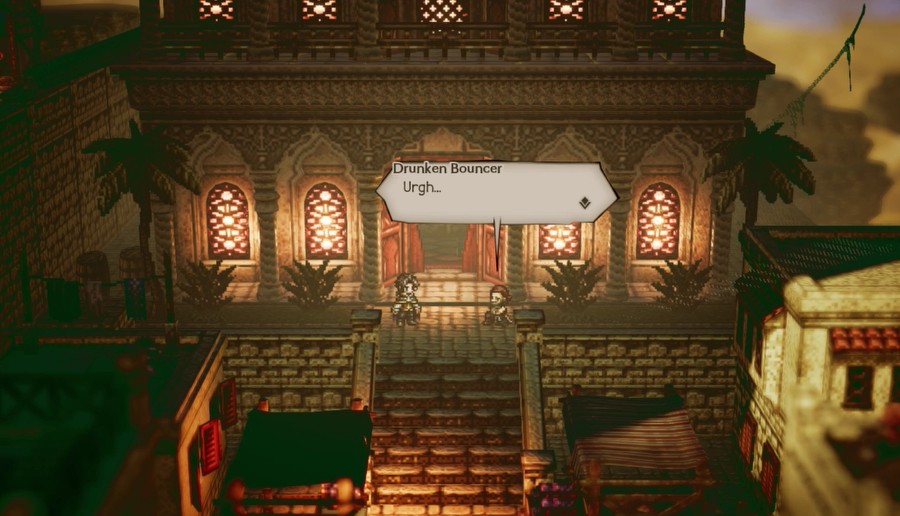 When did my arm get so slow? Have I really been that long out of practice? Well, I'm not having no more of that! It's off to the training yard for me! 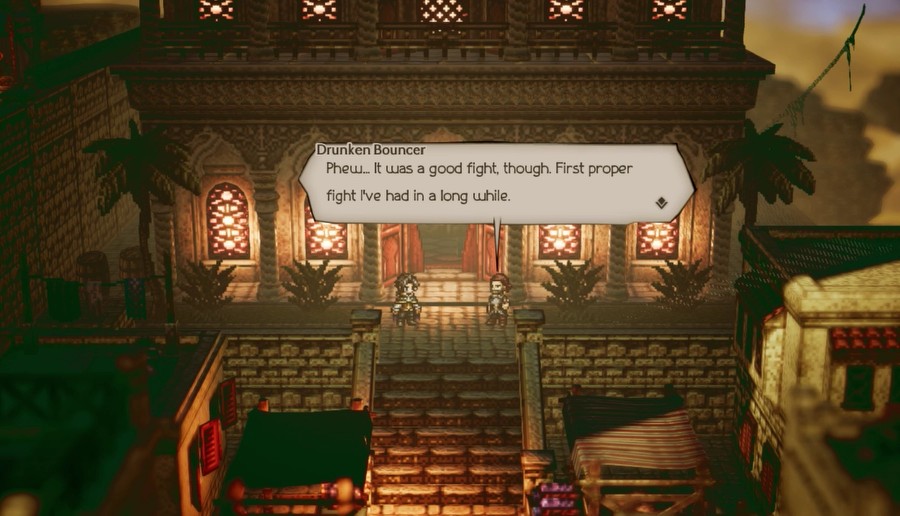 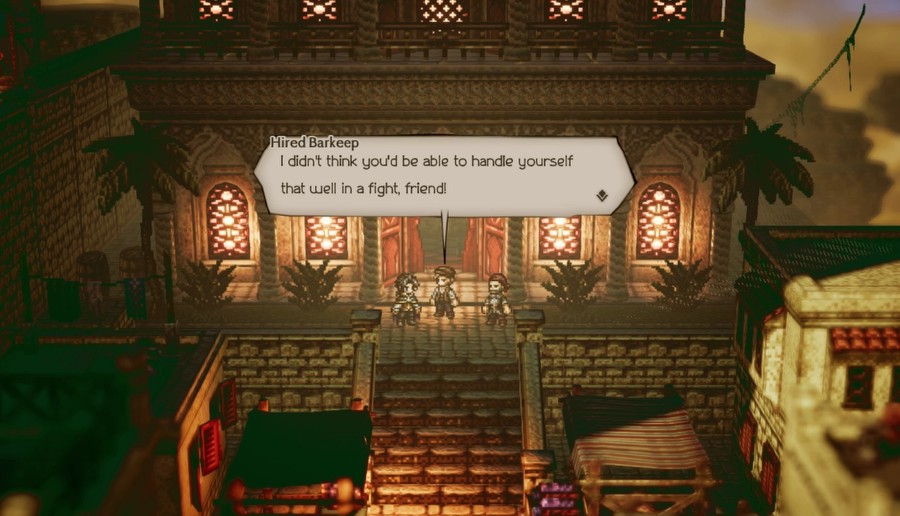 This one here's a right famous swordsman here in the desert. That's why I hired him to guard my shop. 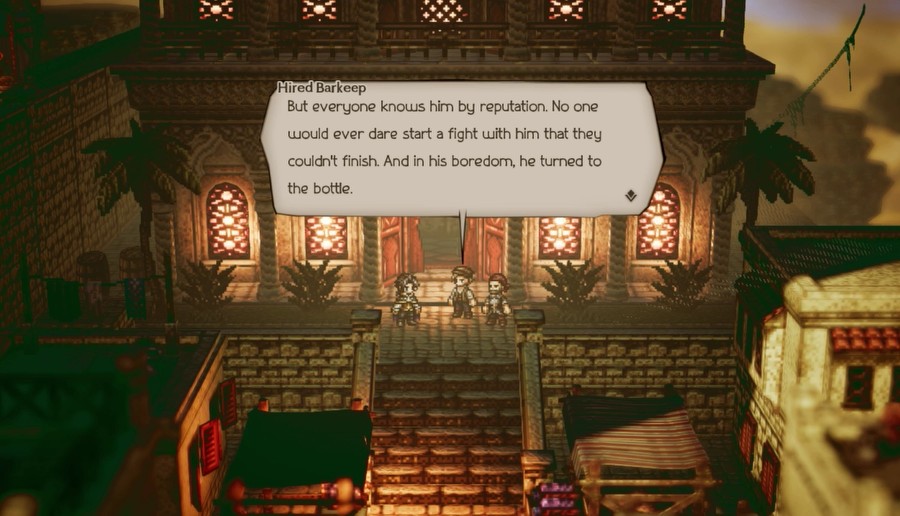 Hehe... But look at you now. You're looking like your old self again! 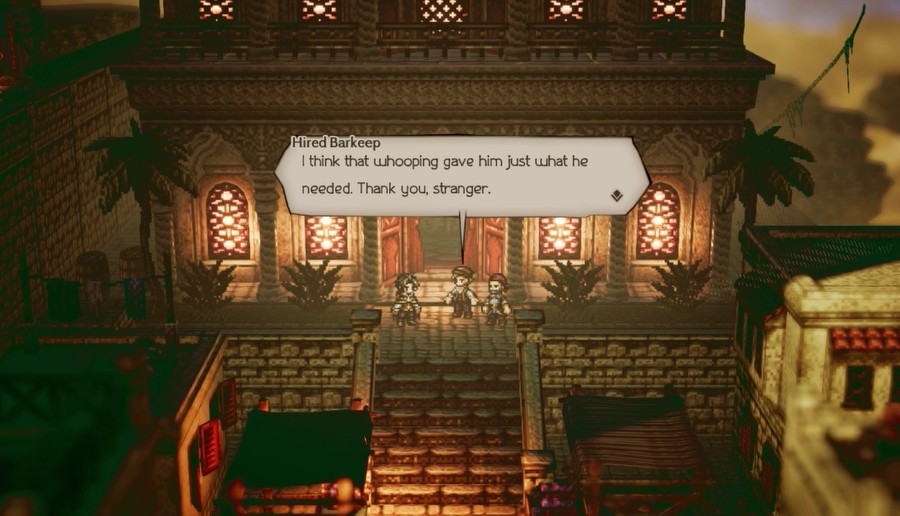 So by beating up a drunkard we gave him a new lease on life, or so this other guy says. Works for me! 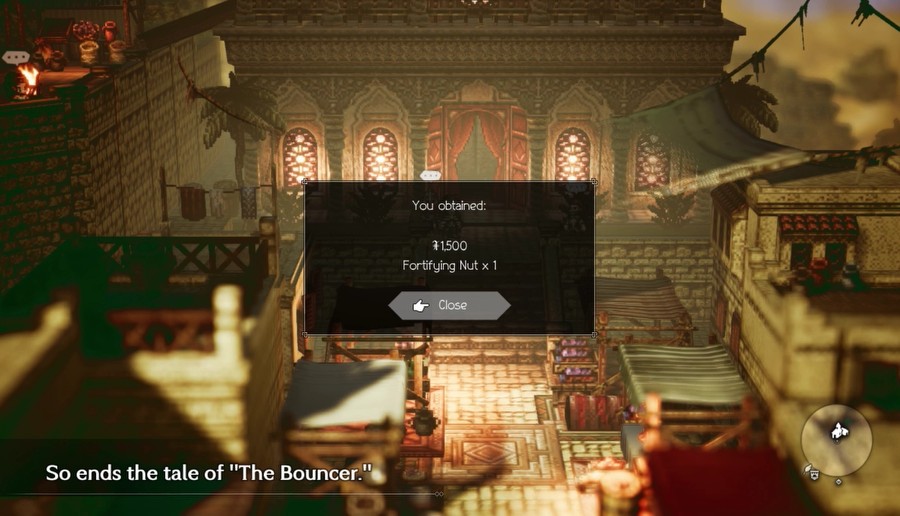 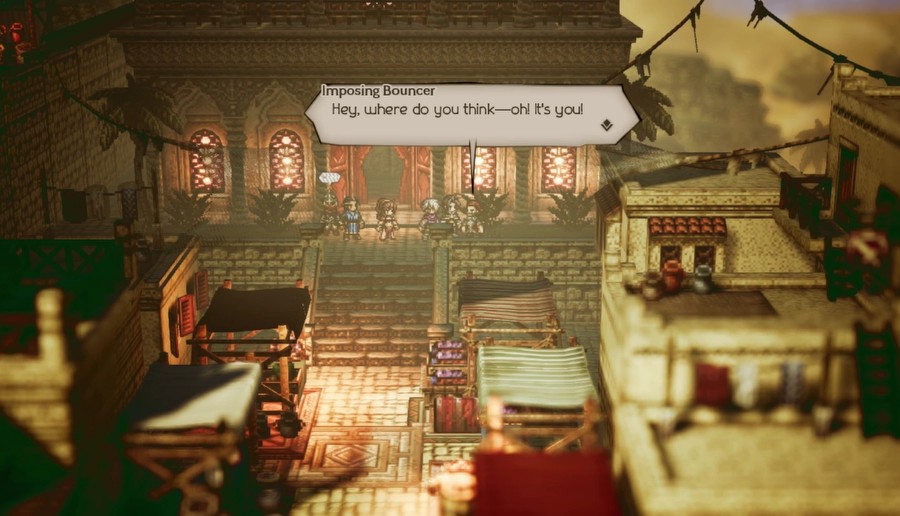 Almost didn't recognize you without my ale goggles on. Me, I won't touch a drop of the stuff any longer. I'll be dedicated myself to the job from now on. 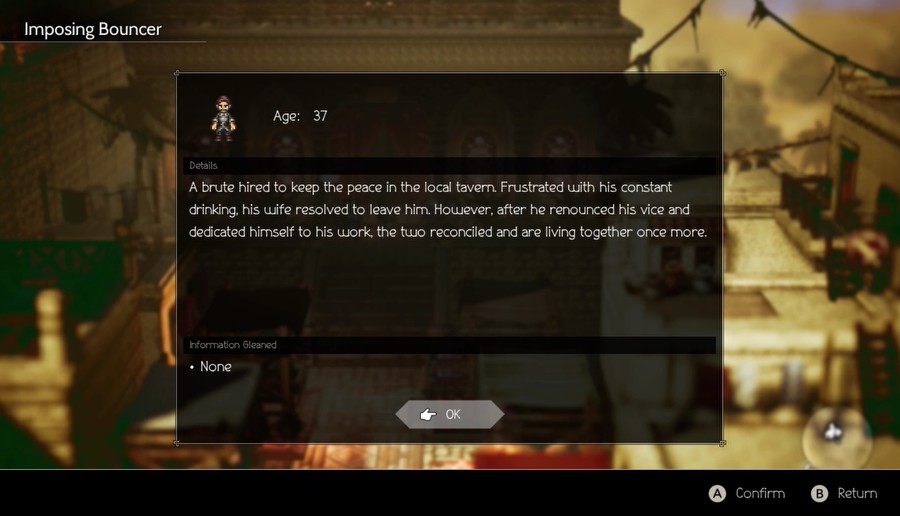 As a bonus, beating him up also saved his marriage! 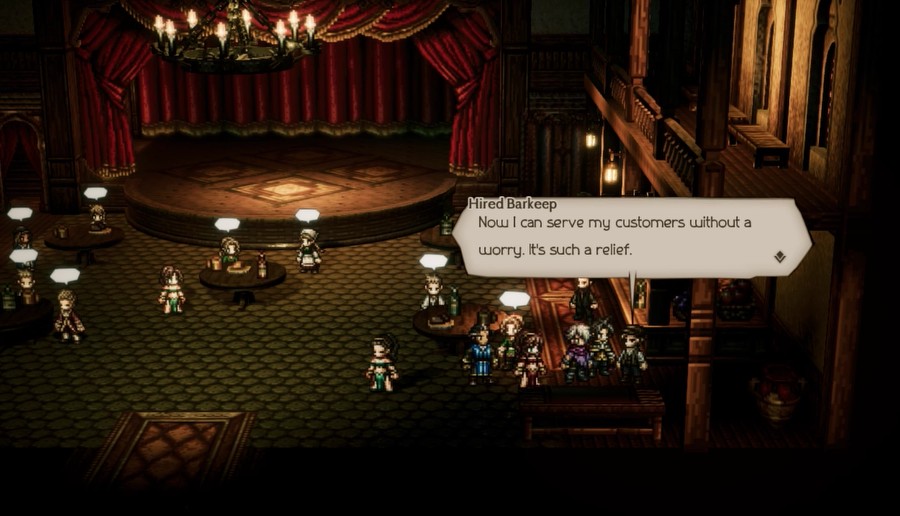 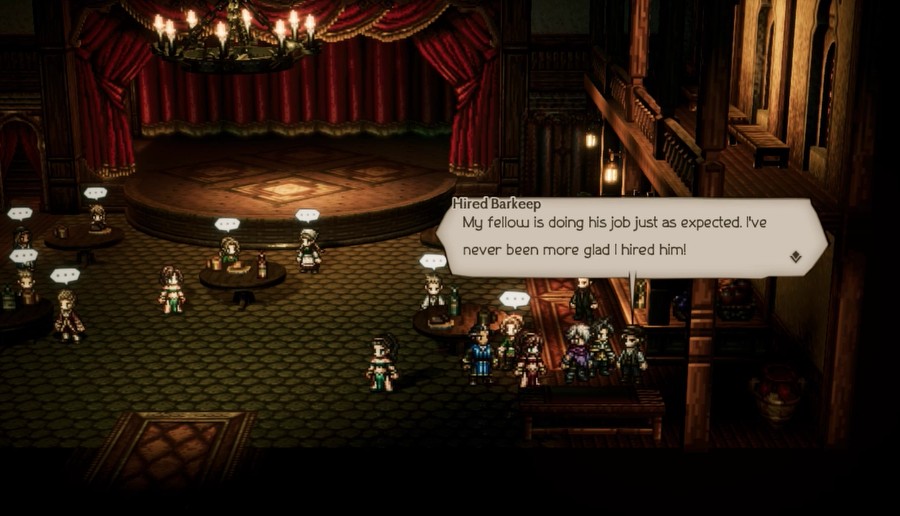 Let this be a lesson: Violence is always the answer.